Gold and silver changed direction and rallied during last week. Will precious metals continue to rise during this week? As I have pointed out in the precious metals weekly outlook, there are several events and reports that could affect the bullion market. These items include: Euro-group meeting, minutes of the recent FOMC meeting, Bernanke's speech, U.S retail sales, Philly Fed survey and U.S jobless claims. On today's agenda: Euro-group meeting.

As seen below, the chart shows the developments in the normalized prices of precious metals during the past several weeks (normalized to 100 as of October 18th). During recent weeks, both gold and silver had an unclear trend. 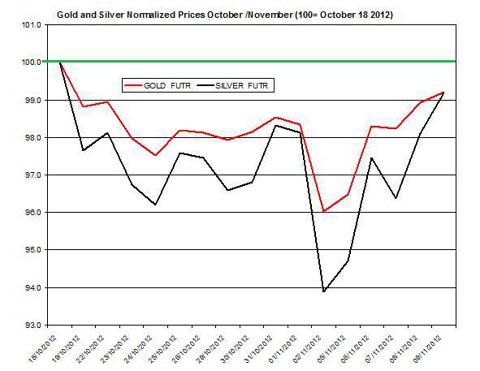 Euro-group Meeting: The upcoming Euro-group Summit will be in Brussels in which the EU leaders will converse over the recent political and monetary changes in Europe. In the last meeting there weren't any big headlines and the market didn't react to the meeting. Today's meeting will refer to Greece's next bailout package. There are some reports that Greece is getting closer in receiving the next bailout, in such a case, this could help rally the Euro.

The Euro/ USD declined on Friday by 0.31% to 1.271. During last week, the Euro/USD fell by 0.95%. Conversely, some currencies, such as the Aussie dollar appreciated during last week against the USD by 0.49%. This mixed trend might have added to the volatility in the bullion market last week. The correlation between gold and Aussie remains mid-strong and positive. During the past several weeks, the linear correlation between gold and AUD /USD reached 0.54 (daily percent changes). The linear correlation between the gold and Euro /USD was 0.53 (daily percent changes). Thus, if the Euro and other risk currencies continue their downward trend against the USD, they are likely to drag down gold and silver.

The prices of precious metals rose during last week, but they might change direction and fall during this week. The U.S Presidential elections are over and now all eyes are on the fiscal cliff the U.S economy is facing. There is also the role of the Fed that might intervene again in the financial markets, which could lead to a rise in the price of precious metals. Nonetheless, these forces are likely to affect bullion prices by the end of the year. In the meantime, there might be a correction in the bullion market and prices might fall this week following last week's rally. If the minutes of the FOMC and Bernanke's speech won't suggest the Fed is considering expanding its monetary policy again, this could pull down the prices of gold and silver. Finally, if the Euro and other "risk currencies" decline against the USD, then they are likely to adversely affect precious metals.