Now that President Obama has won the election, what does that mean for precious metals?

Precious metals opened moderately higher Thursday morning in the aftermath of President Obama's reelection. However, once the U.S. stock markets started to tank (down over 2% at the time this was being written), metals have been pulled slightly lower and are currently in the red - but not nearly to the same extent as stocks. While precious metals may not have reacted dramatically to the election results, the reality is that President Obama is good for precious metal prices.

First, let's address the stock selloff. The European Commission reduced its 2013 growth outlook, stating the region should narrowly avoid recession with an annual growth rate of 0.1%. This is significantly lower than the commission's previous 2013 growth estimate of 1%. Combine ongoing European debt concerns with the looming prospects of President Obama and a split Congress trying to navigate the fiscal cliff, and risk aversion is understandably high.

The reality is that if QE3 was insufficient to push stocks higher, the directional skew for equities is to the downside. Stocks actually sold off last Friday as a result of better than expected employment data. One reason for this development is that a rosier picture of the U.S. economy means a lower likelihood of further central bank stimulus. This paradox - and it is a paradox because one would normally expect stocks to rally after positive economic data - speaks to a disconcerting dynamic wherein current stock valuations may only be supported by the prospects of further stimulus. While we will more than likely get additional stimulus going forward, this is an unhealthy reality and should elicit a rising degree of prudence with regards to equity positions.

When discussing the outlook for precious metals, within the framework of President Obama's second term, an integral consideration is Fed policy going forward. With Bernanke not expected to serve another term as Fed Chairman, the general consensus is that President Obama will nominate an individual with a similar, dovish approach to monetary policy (i.e. preference for low interest rates and more stimulus). Many pundits are predicting that Fed Vice-Chair Janet Yellen is a likely candidate for nomination.

Regardless of who becomes the next Fed chairman when Bernanke's term ends on January 31, 2014, we are likely to see a continuation of the accommodative policies that have characterized Bernanke's tenure with the Fed. As such, the record low interest rates and unprecedented volume of central bank stimulus will be mainstays in the U.S. economy for the foreseeable future. With this in mind, precious metals will continue to derive support from monetary policy in the U.S.

President Obama's victory will similarly support metal prices as investors are increasingly cognizant of unsustainably high annual deficits and a decidedly inert approach to overall debt reduction. As the dollar's value is entirely predicated on the "full faith and credit of the U.S. government," the deteriorating borrower profile of the U.S. government directly influences investor perceptions of the dollar. Mounting concerns regarding the solvency of the U.S. government are positive for precious metals as these assets are intrinsically valuable and are not subject to the counter-party risk associated with the dollar and traditional paper investments.

Now is the time to begin acquiring precious metals before prices really start to move. If we can expect to see annual deficits in excess of $1 trillion dollars (or 10% of our entire economy), and a continuation of the Fed's unabashed production of billions of new dollars each month, even a casual market observer can appreciate the ever-rising allure of precious metals. For each new dollar printed, for every billion dollars added to the U.S. debt load, precious metals are supported.

The graph below shows the annual surplus and deficits of the U.S. government for over 100 years - as you can see, there has been an unprecedented deterioration of the Government's balance sheet. The U.S. will be dealing with the consequences of unsustainable deficit spending for years to come. 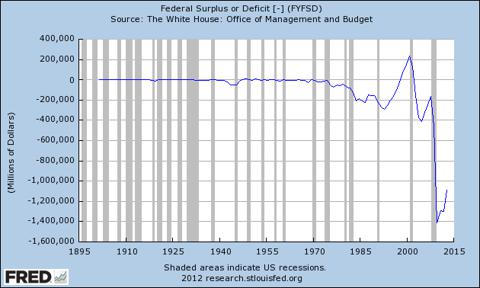 Many of those who oppose investment in precious metals argue that it's too late - you've missed the boat. While it's next to impossible to know the true extent of gold ownership in the U.S., the general consensus is that a meager 2-5% of Americans have a position in precious metals. If precious metals have enjoyed a rally to the extent that we have seen over the last 12 years with this minimal ownership, what kind of price action can we hope to see once 10-15% of Americans own metals?

The reality is that this bull market still has legs, and will be propelled forward by a wave of newly printed dollars and a ballooning U.S. debt burden. Nothing has changed between when this bull market started and now. If anything, the entrenched fundamentals that have driven precious metals to their current levels are being exacerbated by legislative gridlock and political negligence.

With the Republican majority in the House of Representatives, and a Democrat majority in the Senate, we know what kind of leadership we can expect from a split Congress…

Precious metals can provide the insurance we all need from monetary debasement (i.e. Fed printing money), a deteriorating credit profile of the U.S. government, and inept political leadership incapable of making the necessary decisions to reorient the U.S. economy on the right trajectory.