As the credit crunch intensified and global financial panic set in, the gold lease rates soared to the highest level since 2001. However, what has been confused in the uproar about the absolute value of lease rates is the fact that relative lease rates are also quite high.

Many have mistakenly suggested that these high lease rates are the first signs of a coming short squeeze in gold. The flaw in this line of thinking is that the lease rates reported in the press are a derived rate and actually represent the amount that can be earned from the gold carry trade. Many people look at the rates quoted on Kitco and assume that is the cost to lease gold, in reality that is the interest rate one would earn if one were to lease gold, sell it in the spot market and invest the proceeds at LIBOR. 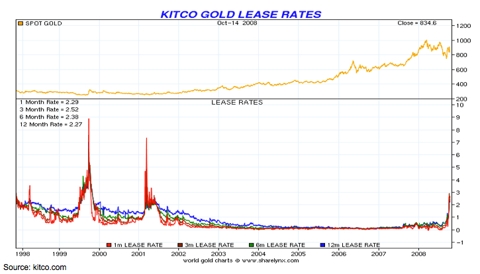 The lease rate reported by Kitco and others is calculated using the following formula:

Where GOFO is the Gold Forward Offered rate, which is the rate at which dealers will lend gold on swap basis against US dollars.

An examination of the underlying rates in 2008 tells a completely different story: 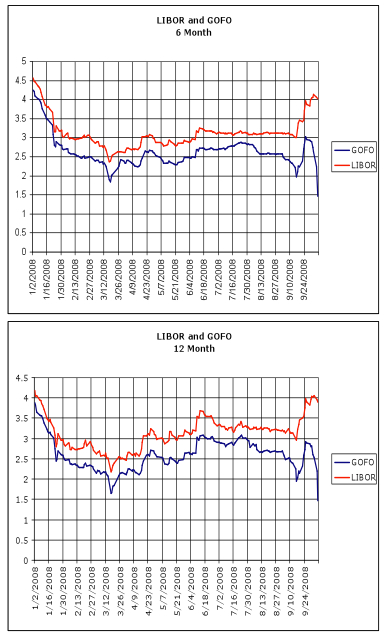 These charts illustrate that the gold carry trade has become more profitable as the financial crisis has unfolded. While the spread between LIBOR and GOFO has increased the cost to lease gold has actually decreased. At the same time LIBOR has increased creating the most profitable gold carry trade this year. In fact, the biggest spread occurred during the most recent equity market decline. This explains why gold has not traded to new highs while the financial markets melted down.

In 1999, the gold lease rates began to spike in July as the GOFO rate dropped. As the lease rates spiked, gold prices fell as would be expected since the carry trade was now more profitable. It was not until September that gold spiked and that was not because of lease rates, it was because of the Washington Agreement which resulted in the Central Bank Gold Agreement. 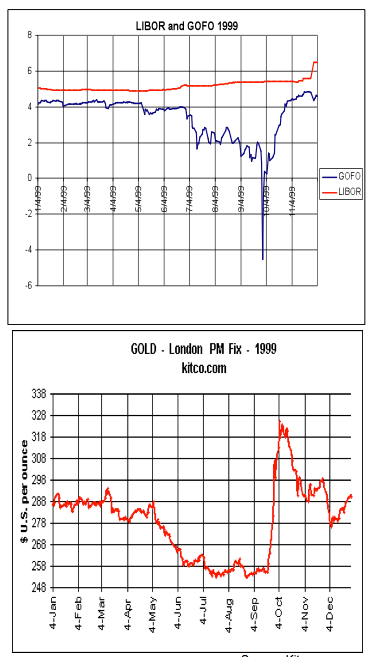 In the first quarter of 2001 gold lease rates began to climb and once again, gold fell until March 2001 when GOFO breached 1%. What is even more interesting about 2001 is that gold prices increased 14% after the GOFO rate fell below 1%, while gold prices rose only 8% in the aftermath of September 11, 2001.

In “normal” times gold would likely remain under pressure until GOFO breaks below 1% or breaks below the Fed Feds rate which currently stands at 1.5% The Fed funds rate and the OIS swap rate are both important to watch since they represent alternative financing sources. If the GOFO rate drops below either of these rates, banks have incentive to borrow gold and sell in the spot market in exchange for dollars. While this action will initially put pressure on gold it also increases demand for leased gold. This increase in demand for leased gold should result in a higher GOFO rate. As the GOFO rate increases the carry trade becomes less profitable and money can be borrowed more inexpensively elsewhere.

However, these are not “normal” times. The most likely explanation for the low GOFO rate is central bank’s desire to stimulate lending. While typically the profitability of the gold carry trade would be enough to cause the two rates to converge, the lack of confidence in the inter-bank lending market has most likely resulted in such a wide spread. As banks begin to lend to each other, they will look for sources of funding. The wide spread on the gold carry trade will be very enticing and should result in bullion bank shorts in gold. It is this action that has the potential to cause a short squeeze. Coupled with increasing investment demand, the move up could be significant.

Disclosure: I do not currently have a position in Gold or GLD, but I may by Monday morning.

Brian Kelly
16.13K Followers
Brian Kelly founded BKCM in 2013 after experiencing a well-publicized conversion about the investment potential of Bitcoin and its supporting blockchain technology, an epiphany he chronicled in his book The Bitcoin Big Bang. As CEO, he brings more than two decades of experience managing global macro strategies, as well as building investment funds and independent investment firms from the ground up. In addition to his roles at BKCM, Brian is the lead portfolio manager for the BKC Fund, an actively managed ETF focused on digital assets and blockchain, offered by REX Shares LLC. He is a sought-after commentator: a regular CNBC contributor, on Fast Money and other programs; and a frequent keynote speaker at crypto and blockchain conferences around the world. In 2015, Brian was named one of the “30 Most Influential People in Bitcoin” by Inside Bitcoin.