As many have noticed, Gold (NYSEARCA:GLD), along with Silver (SLV), has been plunging mightily since the start of October. This has gone on even with Bernanke firing up the printers by announcing that come January, once operation Twist is over, he'll step up the buying of MBS by an additional $45 billion per month. 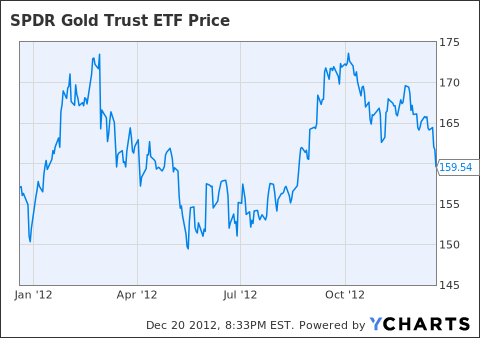 Many have been the motives offered for this movement, from sentiment to a supposed trade against the Euro, etc, etc. But the true reason might be a lot more prosaic. It's old fashioned liquidation.

If I am correct, the market's movement is simply explained by John Paulson's funds being forced to sell due to redemptions. SPDR Gold Shares was John Paulson's largest position by far at the end of September 2012, amounting to 30.6% of his holdings. The GLD ETF is obviously the most important gold ETF in the market, indeed, the single largest factor affecting the market, so heavy selling of this ETF can easily move the entire market.

And we also have public statements - for instance from Morgan Stanley and Citigroup - recommending that investors pull out money from Paulson's funds, after horrible performances both in 2011 and 2012. If we know about these very public instances, we can be sure that there's an entire iceberg below water, also redeeming its investments in Paulson's funds.

This thesis cannot be much simpler. What got the whole giant ball of snow rolling down the hill was Paulson's forced selling. Paulson was GLD's largest holder, GLD was Paulson's largest holding by far, and we have very public proof that Paulson is seeing heavy redemptions after horrid performance. Things can't be much clearer.

Paulo Santos
23.17K Followers
Author of Idea Generator
Our goal is to beat the S&P500 and to provide consistent positive returns.