There has been a lot of discussion and media coverage about the United States' debt issue these days. Why should we care? Because as U.S. citizens, we all own stock in this "company" called the United States of America (let's say the ticker symbol is USA). We purchased this stock through the various taxes we pay every year (income tax, payroll tax, corporate tax). And we receive dividends through the various benefits we receive every year (security provided by defense budget, Medicare/Medicaid benefits, Social Security benefits, etc.). This article attempts to explain the U.S. national debt in simple layman's terms by analyzing the United States and its debt issue as if it were a stock investment.

Let's first discuss the Gross Domestic Product or GDP. The GDP is the market value of the goods and services produced within the United States in a period of time. A more technical definition of GDP is GDP = Consumption + Investment + Government Spending + (Exports - Imports). The way I personally like to think about GDP is to view it as the market capitalization of our USA stock. The current GDP as of 3Q2012 is $15.8 trillion, or our USA stock has a market cap of $15.8 trillion (with a U.S. population of 314mm. Remember every U.S. citizen is like a stockholder of USA stock, a price per USA share would be around $50,000 per share). Given that the U.S. federal tax revenue per year is around $2.5 trillion (see more details below), this would imply our USA stock trades around 5.5x Revenue multiple ($15.8 trillion GDP divided by $2.5 trillion tax revenue). 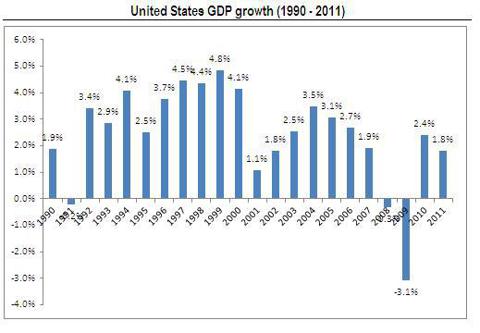 In other words, the U.S. is like a mature, large-cap stock growing at moderate pace of 2-3% a year. Emerging countries like China, India, Brazil, etc. that have 7-10% annual GDP growth rates are like high growth, mid-cap stocks. 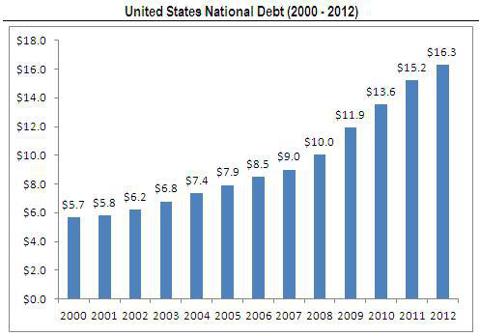 How does the debt to GDP ratio compare to other leading developed countries? 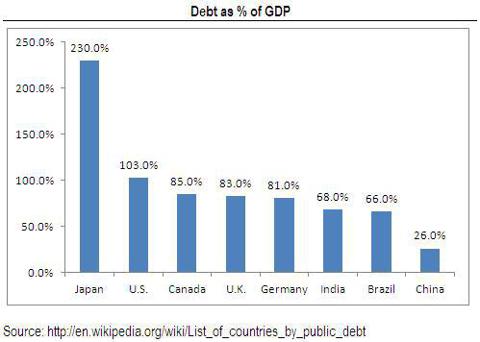 The U.S. has the highest debt to GDP out of the large, developed countries shown above, second only to Japan. What are some of the other countries that have a higher debt ratio than the U.S.? Greece 161%, Ireland 105%, Portugal 107%, Lebanon 136%, Jamaica 139%, and Barbados 117%. Note that some of these countries are a fraction of the U.S. GDP, and several of these countries are countries related to the on-going Euro crisis. For a full listing of all countries statistics, please see here.

Now let's compare the U.S. to other publicly traded stocks, in terms of its balance sheet and debt leverage ratios. The debt to market value (debt to GDP) ratio for the U.S. is over 100%, and the U.S. government debt is rated AAA-. There are currently only four publicly traded companies in the entire world that have a similar AAA debt rating. Here are the four companies along with their debt-to-market value ratio, which are significantly lower than the U.S. of 100%: Johnson and Johnson (JNJ) 10%, Exxon Mobile (XOM) 5%, Microsoft (MSFT) 7%, and Automatic Data Processing (ADP) 2%. By the way, I'm not even giving these companies credit for their large cash balances which in most cases would more than offset their debt amounts.

What types of companies do have similar leverage ratios of +100%? Well, they would include capital-intensive type industries such as utilities (Duke (DUK) is 98%), telecom carriers (Verizon (VZ) is +100%), railroad operators (CSX (CSX) is 90%), and automakers (General Motors (GM) is 80-90%). Note, these companies have much lower debt rating than the U.S., even though they have similar leverage ratios (VZ A+, HMC A+, DUK BBB+, CSX BBB and GM BB+). Basically, the ratings agencies are not penalizing the U.S. as much (yet) for the high debt to GDP ratio, because the United States is still the default, go-to currency of the world (what other options are there, the pound, euro, yen, RMB, or hard assets like gold? U.K. and Japan has high leverage as well, the Euro has its own crisis, Chinese RMB is not liquid enough globally, gold is a non-productive asset).

Difference between Deficit and Debt

Let's clarify the difference between the Annual Deficit and the National Debt. The deficit is the annual shortfall between federal tax revenue collected minus the federal spending every year. It's similar to the "net loss" for the year of a company (if a company has more expenses than revenues, they have a net loss). And if a company has a net loss, they will then need to raise capital or borrow debt to fund that net loss.

The national debt on the other hand, is the total debt borrowed by the United States up to today. It's the cumulative amount borrowed to fund all the prior years' annual deficits (or annual net losses). Basically, the United States has been operating at a net loss (deficit or unbalanced budget) for a very long time now. If the U.S. was a stock with annual losses, shareholders would have pressured management (government) to turn a profit (or balance our annual budget) a long time ago.

How did we get to $16.4 Trillion of National Debt

Let's look at the past "CEOs" of our USA stock (or past Presidents of the U.S.), to see how we got to such a large national debt amount. In 1981, the total national debt was about $1 trillion, or below 50% of GDP. Over the next 20 years, each president did their share of adding to the deficit.

Costs are Greater than Revenues

However, the primary cause of our debt issue is that for decades, we have managed to spend more than we collect in taxes each year. In other words, we have incurred a loss or deficit every year for decades now (except for a few years around 1998-2000), and every year we operate at a loss, we need to borrow more and more money.

In the past +40 years, the government on average has collected 18% of GDP in Revenues each year. However, on average they have spent 21-22% of GDP on Expenses or Outlays per year. In 2012, the gap is even wider at 16% for Revenue and 23% for Expenses. From 1998-2000 (during Bill Clinton's term), we did manage to balance our budget and have revenues exceed expenses, however for the other 38 years, we have spent more than we have received. When you spend more than you receive, you need to borrow money to make up for that shortfall and add to the national debt. It's no different than when individuals spend more per month than their monthly salary and need to borrow on their credit cards. We have gotten comfortable as a nation borrowing to fund current spending needs at the cost of future consequences (future generations need to eventually pay off that credit card tab).

As you can see, we are currently running at an annual deficit (revenue minus expenses) of $1 trillion. This means that every year, we add an additional $1 trillion to our national debt amount, which is already at $16 trillion.

On the revenue side, the components are the following: individual income tax 45%, payroll tax 35%, corporate tax 10%, and other tax (including customs tax, estate tax, gift tax, etc.) 10%. Note that total revenue taxes collected by the government can increase either by: 1) raising the tax rate (remember that we still are enjoying lower tax rates from the Bush tax cuts), or 2) stimulating the economy so that keeping existing tax rates the same still generates higher tax revenue (for example, 25% tax of higher $125,000 salary is greater than 25% tax on $100,000 of salary).

On the expenditure side, the components are the following: Social Security 22%, Medicare/Medicaid 20%, defense budget 18%, unemployment 10%, interest expense on national debt 7%, federal pension 6%, and others 14%. Note a few things: Social Security and Medicare/Medicaid combined total 44% of our expenses every year, the majority of our expenses. These programs both will need significant reform if we are to fix our national debt crisis (without reform, social security will default in 20 years and starting 2033, people will only get 75% of their entitled social security benefits). Also, the defense budget alone is 18% of our expenses, or $650 billion, every year. Back in 2000, the defense budget was only $300 billion, half of today's amount. Note also that unemployment benefits are abnormally high and costs us $350 billion a year. This would decrease as the economy improves and unemployment rates come down.

Finally, note that interest expense on our national debt cost us $260 billion a year. Remember that the U.S. Government is borrowing at all-time low rates right now (30 year Treasuries 2.94%, 5 year Treasuries 0.8%, and 1 year Treasuries 0.16%). The U.S. is currently able to spend and push off solving our debt problems partly because they can borrow at ridiculously cheap rates (if we could borrow on our credit cards at less than 1% for 5 years, I'm sure we all would become addicted to borrowing as well). However, the current low rate environment will not last much longer. When interest rates start going up (when other countries begin demanding higher rates for lending us money), our annual interest expense of $260 billion will rise significantly.

Fixing our U.S. debt crisis is a highly complicated and politically sensitive issue that much smarter economists, politicians and business CEOs are all debating on how to fix. The point of this article was not to offer a solution to this complex problem. The point of this article was to attempt to summarize this complicated issue into simple terms so that all of us can follow and discuss this important issue. The way I personally like to simplify our debt issue is to view the U.S. as if it were a stock investment:

In other words, if the U.S. was a stock, we are currently highly levered (100% debt/market cap) and operating at a net loss every year. Not too many investors would invest in a stock with those types of fundamentals. I sincerely hope that our elected government officials can work together to resolve political differences and finally get the U.S. back on track and make our country a great investment once again.

Michael Fu
594 Followers
Value investor. 12+ years in corporate finance and i-banking. MBA from Kellogg School of Management, BBA from University of Michigan, and CFA charter holder.
Follow
37 Comments
To ensure this doesn’t happen in the future, please enable Javascript and cookies in your browser.
Is this happening to you frequently? Please report it on our feedback forum.
If you have an ad-blocker enabled you may be blocked from proceeding. Please disable your ad-blocker and refresh.