Ever since President Obama threw his support behind the promise of the fledgling industry, the development of algae biofuels has become a sensitive topic. The political opposition had found a rallying point in deriding the strange and foreign concept of using green slime as a means of industrial production. Even as the Navy put its full weight behind the development of this new technology, Congress stepped in to intervene against it. Public opinion was further damaged when academia represented by U.S. National Research Council appeared to turn away from the algae sector's viability as seen in the article found here. Yet such a broad generalization of a growing industry has largely ignored the progress already under way for some particular companies within the sector.

Solazyme (SZYM) is an innovator of renewable oils and is capable of creating tailored oil solutions for clients by utilizing a unique carbohydrate-to-oil process. As a company specializing in microalgae, renewable oil and bioproducts specialist Solazyme has found little popular support in light of the existing political backlash. Ironically, this is the same company that was able to test sell algae fuel for regular diesel prices a little over a month ago. It is also the same company that has commercially penetrated the cosmetics industry and is poised to make a difference when it comes to food products and chemicals. The company continues to excel on all of its business fronts despite the surrounding criticism circulating around the algae industry that has hurt its stock price. But what is it about Solazyme that allows it to defy the conventional wisdom that asserts its impending downfall? Indeed, it lies in the fact that Solazyme had already failed many years ago but was able to reinvent itself by capitalizing upon that failure. 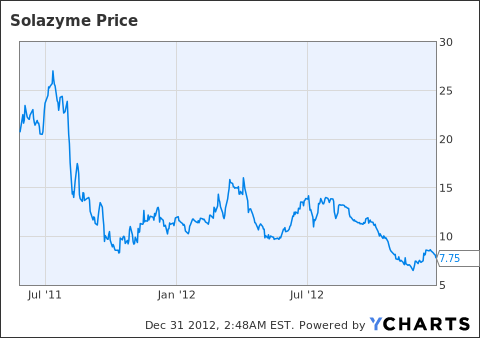 The name Solazyme now seemingly serves as a misnomer to the company and the process it has come to refine. Early in its inception back in 2003, Solazyme was imagined as an photoautotrophic algae company using sunlight and thereby qualifying the combination of the terms "solar" and "enzyme." Yet as described in an interview with co-founder Harrison Dillon, the company was forced to face the cost inefficiencies of open-pond algae operations. Rather than marching on without a solution to cost, the company founders went back to their investors and proposed a radical reversal. They decided to pursue a lower-cost fermentation process that only worked with a small percentage of algae, which was capable of growing on sugar. In effect, Solazyme decided to abandon the free resource of sunlight and the desirable benefit of carbon sequestration in order to chase the practical quest for cost efficiency in the race to scale up the technology. The founders chose the road less traveled by, a path which few peers have chosen to follow since. 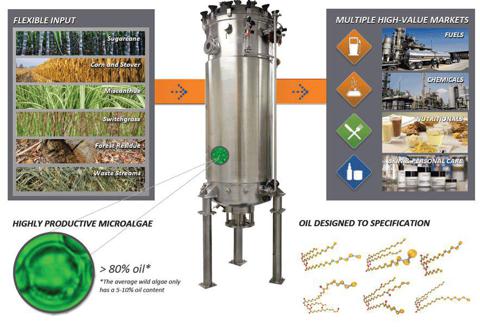 By specializing in heterotrophic fermentation, a controlled process utilizing standard industrial vats to grow algae in the dark, Solazyme gained several unique advantages. The fermentation process is well-known, easier to control, more accurate to reproduce, independent from weather, and requires significantly less harvesting costs. Apart from this, the largest distinction is the fact that algae is simply more productive. As demonstrated in a research paper concerning the process found here, lipid content in a heterotrophic process reached as high as 55.2% compared with the 14.57% found in autotrophic cells. After years of research, Solazyme has been able to vastly improve oil concentration beyond those independent statistics and now boasts concentrations of more than 80% according to the company's website as shown in the graphic above.

Yet not only are lipid contents higher in a heterotrophic process when contrasted against open-pond and photobioreactors, but so are the cell densities. As noted in another research paper found here, a significant benefit for the use of heterotrophic growth is higher microalgae cell densities that were capable of reaching 50-100 grams of dry biomass per liter in one experiment. This is vastly superior to the maximum theoretical results of 30 grams of dry biomass per liter found in autotrophic production. This also helps validate the thought expressed by Harrison Dillon in the previously referenced interview as he stated in 2010 that his company was generating "hundreds of grams per liter of dry cell weight." When put together, it's clear that Solazyme's heterotrophic process is able to more efficiently produce, concentrate, and control algal oil production when compared against the conventional technologies of photoautotrophic cultivation.

Yet this alternative process comes with two major limitations of its own. First, there is a limited amount of microalgal species that can be grown heterotrophically. Second, increasing energy expenses and costs can come about from adding sugars and other organic materials. The latter issue had likely deterred other algae biofuel companies from pursuing a similar process during their initial developments. Many of these companies were established as they witnessed "food vs. fuel" controversies of first generation ethanol production. Yet fortuitously, Solazyme is largely overcoming this issue by prioritizing its pursuits into higher margin industries. In 2011, Solazyme launched Algenist and has since received a strong reception in the field of cosmetics. The brand is poised for triple-digit revenue growth in 2012, and based on product revenue and costs appears to be supporting gross margins of 65% according to the quarterly report found here.

Ironically, it may also be the first limitation that serves to Solazyme's own advantage in the present. Because there are a very limited number of proven strains that are capable of thriving in the dark, there also remains a narrow doorway by which any future competitors may enter into the market to compete. Solazyme continues to file more intellectual property and has placed extensive research into the algae genus of Prototheca and Chlorella. In doing so, the company continues to claim a greater legal shield for new capabilities derived from such research. It continues to build an inherent first-to-market advantage by developing the means to push the technology further. Patents No. 7,935,515 and 8,187,860 for instance allow Solazyme a very precise capability to introduce a sucrose utilization gene into heterotrophic microalgae cells in order to produce cells with a high level of oil content. By capturing the inventions and technologies needed to be economically surpassed, Solazyme firmly grounds itself with a solid technological platform on which to further develop unchallenged.

In my interview with CEO Jonathan Wolfson back in March 2012, I inquired into what it is he believed his company's advantage was in regards to current and future competitors in this unique space of heterotrophic algae fermentation. His answer boiled down to two specific points. First, the company has developed a very productive parent strain. Second, the company has developed a very powerful molecular tool kit. Investors should consider the amount of time and money it would take for any future competitor to develop either one of these by themselves. They should then consider the additional efforts of attempting to integrate the two together. However, were this not enough and a competitor was able to figure out a way around the company's intellectual property, Mr. Wolfson left one parting point during our conversation:

But it's not just [the intellectual property protecting these advantages]. Remember, it's taking these oils into products. You're filing IP when you make a bar of soap. So somebody who comes behind you... even if they can figure out a way around your intellectual property or if they're extremely lucky and over time they invest in an enormous amount of money that can make something as productive, of which is an open question, are they even going to be able to use the oil in any of those products?

In essence, one of the key comparative advantages of Solazyme to future competitors in this niche field of expertise is actually dual-layered. The company is able to not only protect the process to economically create the oils, but it can also protect the process to turn these oils into tangible products useful to the consumer. This is why a patent like No. 8,278,261 named "Method of making soaps from oil-bearing microbial biomass and oils" is so important. Such intellectual property can serve as a deterrent to those even pondering to enter into this novel market space.

Yet such an advantage can also serve as a convincing rationale for future partnerships. This is why a company like Roquette Freres, which is one of the largest starch manufacturers in the world, decided to pursue a 50-50 joint venture relationship with Solazyme rather than compete against it. Roquette even fortified the relationship by signing an exclusive sales agreement for the joint venture's products. It may also be a reason why Unilever (UN), a large soap manufacturer and heavy consumer of oils used for surfactants, was convinced into signing commercial development agreements with Solazyme as found in the press release shown here.

As a start-up company founded in 2003, Solazyme has come a very long way amidst skepticism and a misinformed public about what is possible through algae technology. The company has raised a capital surplus of $369 million over the past decade and currently maintains over $167 million in cash and short-term investments on hand. It currently trades with a market capitalization of a mere $472 million despite being less than a year away from having operational capabilities at large-scale commercial manufacturing facilities. A look at my other article found here details a possible route to positive earnings. While the company continues to heavily spend on research and development and capital expenditures, Solazyme remains well-capitalized to initialize large-scale production of its oils. The company has even managed to pay for services through the sale of equity to Archer Daniels Midland (ADM) in order to pursue a capital-efficient manufacturing capability.

Overall, Solazyme resides in a unique subsector within a broader field of expertise that has been largely criticized. Though the stock price has suffered, the tangible corporate progress has not. The company's pursuit for a heterotrophic algae approach to producing oils has given the company an innate advantage when it comes oil production. Yet years of research and development have allowed the company to excel beyond even these inherent advantages in order to develop a comparative edge that allows for the process to ultimately become economically viable. Solazyme has protected these advances through a strong web of intellectual property, and the company continues to further develop the tailored oil space seemingly unhindered.

Investors should continue to look forward in light of the company's numerous advances of the past few weeks. Having recently extended upstream relationships with Bunge (BG) and ADM, the company proceeded to be the first to break the ferment wall as described in an article found here. It appears as if Solazyme remains positioned as one of the more promising industrial biotechnology plays currently trading on the market to date. Yet the company's stock price has continued to struggle. Incoming revenue remains weak through the lack of established manufacturing capacity - a challenge now currently being met through ongoing construction. However, as seen above, Solazyme also stands well positioned for a unique advantage in a very niche field of expertise. The company can economically produce tailored oil solutions in high-margin industries. It continues to claim critical intellectual property in a narrow pathway that few competitors may even be able to follow through in order to effectively compete.

Disclosure: I am long SZYM, BG. I wrote this article myself, and it expresses my own opinions. I am not receiving compensation for it (other than from Seeking Alpha). I have no business relationship with any company whose stock is mentioned in this article.