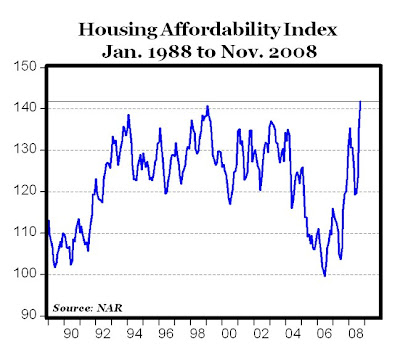 Thanks to the National Association of Realtors, I was able to get monthly data on the Housing Affordability Index (HAI) back to 1988. As the chart above shows (click to enlarge), the October HAI of 141.8 (a family earning the median family income had 141.8%% of the income necessary to qualify for a conventional loan covering 80% of a median-priced single-family home) is the highest level on record, going back at least to January 1988.

As I mentioned in this recent CD post: a) the recent increase in housing affordability is good news for the real estate market, since it will help in the recovery process (i.e. a "Larry Kudlow mustard seed"), and b) this increase in housing affordability, now reaching an all-time historical high, has gone unreported by the media, I still can't find a single news report on this topic.

Mark J. Perry
939 Followers
Dr. Mark J. Perry is a full professor of economics at the Flint campus of The University of Michigan, where he has taught undergraduate and graduate courses in economics and finance since 1996. Starting in the fall of 2009, Perry has also held a joint appointment as a scholar at The American Enterprise Institute. Perry holds two graduate degrees in economics (M.A. and Ph.D.) from George Mason University and in addition, and has an MBA degree in finance from The University of Minnesota. In addition to an active scholarly research agenda, Perry enjoys writing op-eds for a general audience on current economic issues and his opinion pieces have appeared in most major newspapers around the country, including USA Today, Wall Street Journal, Washington Post, Investor’s Business Daily, The Hill, Washington Examiner, Dallas Morning News, Sacramento Bee, Saint Paul Pioneer Press, Miami Herald, Pittsburgh Tribune-Review, Detroit News, Detroit Free Press and many others. Mark Perry has been best known in recent years as the creator and editor of one of the nation’s most popular economics blogs, Carpe Diem. Professor Perry has written on a daily basis since the fall of 2006 to share his thoughts, opinions and expertise on economic issues, with a strong emphasis on displaying economic data in a visually appealing way using graphs, charts and tables.