There are three general opinions of technical analysis: (1) it is a science that works, (2) it's a pseudoscience that works because its practitioners all do the same thing when a chart is a certain way, or (3) it's a bunch of hogwash.

I'm somewhere between (2) and (3), but am more open to (1) after tracking Adam Hewison's predictions on spot gold for a couple of months. I would like for (1) to be true, as would most people, for obvious reasons.

Certain chart and volume patterns are supposed to foretell a stock's (commodity's, ETF's, etc) future price movement. Occasionally, if I come across such chart patterns I'll post about them. Then, I'll check back after a while to see how the predictions turn out. With enough such experiments, it'll hopefully be possible to either confirm or deny (3).

A major thing that can skew results is that I can easily misread charts. For this reason, I'll stick to the so called archetypal patterns: double top, double bottom, head and shoulders, cup and handle, etc, that are easy enough to identify with software.Today, I'll look at two chart patterns, the "double top" and the "double bottom."The double top chart has two peaks that are roughly around the same level, with a moderate dip in between. It is supposed to be a bearish signal when the stock goes below the level of the dip between the two peaks.Here's one stock that has a double top chart: American Capital Agency (AGNC). The pattern manifested over the last seven or so days, in the right corner of the image below. AGNC closed at 19.13 on 12/10/08. Let's see where it will be at the end of next week.click to enlarge 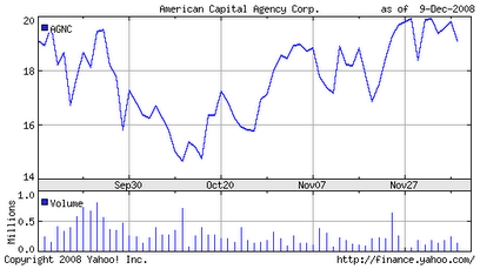 A double bottom is essentially the opposite of a double top. It is two about equal dips with a moderate peak in between. The chart is supposed to be a bullish indicator when the stock's price goes above the peak.Drugstore.com (DSCM) closed at $1.19 on 12/10/08. The double bottom for DSCM started out in mid November: 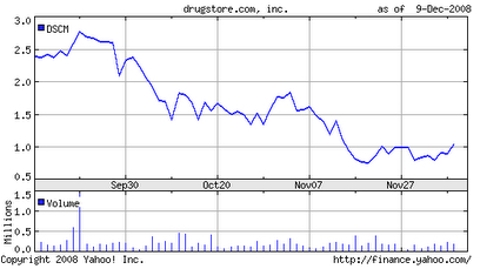 So, let's see how these stocks do in the near future. We're looking for DSCM to go up and AGNC to go down.

Disclosure: I hold no positions in the securities mentioned above.

Hobbes Investment Research
46 Followers
Devin Hobbes is the author of the soon to be updated Dividends: Pros, Cons, Sources, and Strategies.