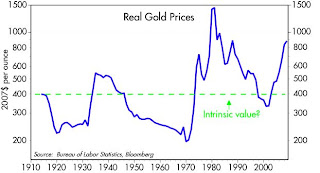 It is said that gold is precious because it doesn't oxidize, it is relatively scarce, it is beautiful, and it is the only thing proven to hold its value over long periods. If gold is a good store of value, maintaining its purchasing power relative to other things over time (e.g., one ounce of gold buys about 20 barrels of oil on average), then it must have some intrinsic value around which its actual value fluctuates.

This chart is a crude attempt to find that intrinsic value, which I'm guessing is about $400/oz. give or take a bit. My rule of thumb for interpreting gold prices (which I don't try to predict) is that when gold trades above its intrinsic value, as it is now, that means that people are willing to pay a premium for its qualities. It's trading at a premium today because monetary policy is accommodative, and because geopolitical tensions (e.g., India/Pakistan, Israel/Hamas) are elevated. Gold tends to trade below its intrinsic value (e.g., in the 1950s and 60s) when monetary policy is tight and inflation risk and geopolitical risk is relatively low.

So if you are considering buying gold these days, you need to keep in mind that it is somewhat expensive. That's not to say it can't pay off, but there is a hurdle that needs to be overcome (i.e., fears of rising inflation and geopolitical disasters need to be realized) before gold prices can move higher. In addition, there is the issue of timing: over the next 10-20 years I would predict that gold will tend to drift back to its intrinsic value, thus rendering it a very poor investment—and don't forget that gold is one of the very few things that doesn't offer any yield. But that doesn't rule out gold going to $1500 should the Fed fail to withdraw in a timely fashion the massive amount of money it has supplied to the market in recent months.Something to think about.