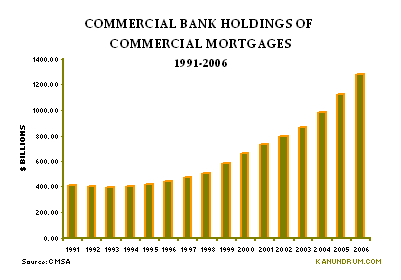 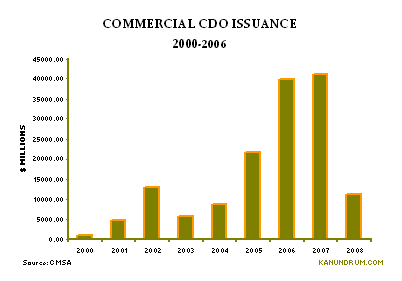 This chart illustrates that CDO issuance was at its peak from 2005 to 2007, similar to the housing market. It is also easy to see that in 2008, CDO issuance has dropped precipitously. According to the CMSA, there have not been any CDOs issued since June 2008. A similar pattern is found with CMBS issuance. 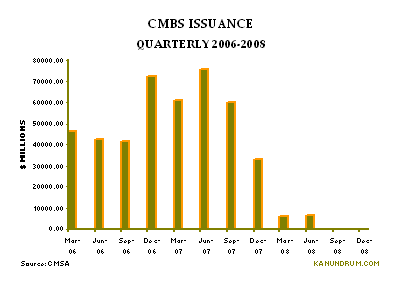 A reasonable person would look at the data and conclude that banks probably decreased holdings in commercial mortgages as the securitization market dried up…by now, we all know that the people running the banks are neither reasonable or rational. 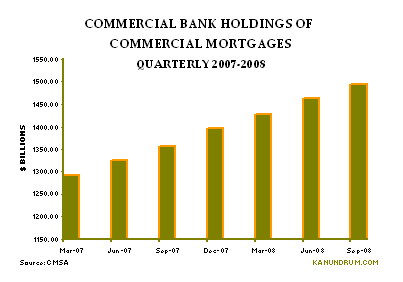 The irrational behavior is glaring, from Q1 2007 to Q3 2008 banks increased commercial loan holdings by 15% while the securitization market collapsed. It is now estimated that commercial banks hold 43% of the $3.4 trillion commercial mortgage loan market. In a previous post, I discussed the rising delinquency rates in the commercial mortgage loan market. Deutsche Bank estimates that delinquencies will rise to 3% by the end of 2009. Interestingly, during the S&L crisis the delinquency rate rose to 30% and currently, many CMBS are pricing in that scenario.

A back of the envelope stress test for banks under various delinquency rates is presented below. The table was constructed using CMSA data for bank holdings of commercial mortgages totaling $1.493 trillion.

The low end of the stress test is the 3% delinquency rate estimated by Deutsche Bank, while the upper bound is the delinquency rate being priced in to some CMBS. The billion-dollar question is who is right? If the low end prevails then the banks are facing $44 billion of additional write-offs, and if the CMBS market is correct then losses soar to $447.9 billion. Recall that banks received $250 billion + to fill the hole caused by the residential mortgage market, and the 90+-day delinquency rate on sub-prime mortgages is running about 30%.

Given that the current economic environment is much worse than during the S&L crisis, it is not hard to understand why the CMBS market is pricing for a 30% default rate. Since the banks own a higher percentage of commercial mortgages, the resulting losses could be larger than the so-called “sub-prime” losses. So while Congress debates whether or not the TARP was put to good use, the $400 billion commercial mortgage time bomb is ticking.

Disclosure: I am long SKF and SRS.

Brian Kelly
16.13K Followers
Brian Kelly founded BKCM in 2013 after experiencing a well-publicized conversion about the investment potential of Bitcoin and its supporting blockchain technology, an epiphany he chronicled in his book The Bitcoin Big Bang. As CEO, he brings more than two decades of experience managing global macro strategies, as well as building investment funds and independent investment firms from the ground up. In addition to his roles at BKCM, Brian is the lead portfolio manager for the BKC Fund, an actively managed ETF focused on digital assets and blockchain, offered by REX Shares LLC. He is a sought-after commentator: a regular CNBC contributor, on Fast Money and other programs; and a frequent keynote speaker at crypto and blockchain conferences around the world. In 2015, Brian was named one of the “30 Most Influential People in Bitcoin” by Inside Bitcoin.