The stock market's impressive move higher continues. In a previous article, I gave my reasons for anticipating all time highs. Already, indexes such as the iShares Russell 2000 Index (IWM) and the iShares Dow Jones Transport. Avg. (IYT) are in record territory - exceeding highs achieved in the prior bull market.

The market's original launch began in November with the fiscal cliff drama which caused an almost 10% sell-off in the indices. However, there were some constructive developments indicating accumulation, noted in this article. The market bottom coincided with positive statements from Congressional leaders on the White House lawn regarding the ongoing negotiations.

Since then, the SPDR S&P 500 ETF Trust (SPY) has not looked back. There was a brief bout of weakness prior to the actual deal being signed, an outcome the market was clearly forecasting based on price action. In 2013, the market has been in the midst of a 100 point melt up with barely any weakness.

In this article, I want to examine the perfect brew of central bank liquidity, economic data, and technicals currently powering the market higher and whether it is sustainable. Most interesting has been the data, which seems to be in the sweet spot of indicating better than expected growth, but not so much growth that the Fed would be inclined to step on the brakes with regards to liquidity injections via asset purchases.

The most important news has been the sterling performance of Q4 earnings with 63% of companies beating earnings estimates and 62% of companies beating revenue estimates according to Bespoke. This is evidence that the Street grew too bearish following the European malaise in the summer and fiscal cliff negotiations in the fall with aggressive downgrades. Part of this rally is due to a readjustment in perceptions as companies have outperformed expectations.

Manufacturing data also came in better than expected, reversing the slide from 2012. The ISM index is comfortably back in expansion mode at 53.1 after threatening to slip below 50. I earlier speculated that the weakness in this data may have been a temporary blip due to the weather and effects of uncertainty due to the fiscal cliff rather than the start of a new trend. It also seems that the market's optimism about future economic growth seems to be confirmed by the data. It did not make sense for transports to be hitting all time highs while manufacturing was contracting. 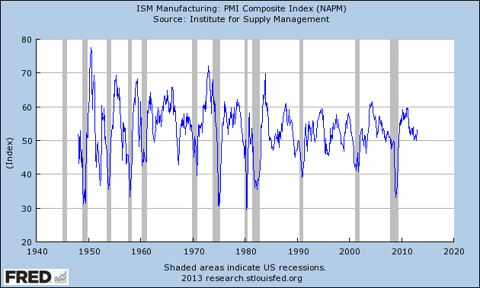 The employment number showed a continuation of tepid growth, however a lack of huge growth is market positive in its own way for the short term. Future central bank liquidity is contingent on unemployment remaining above 6.5% - the Evans rule. More encouraging was the positive revisions in prior months. 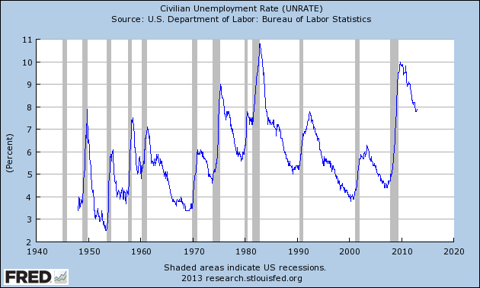 Housing is also on the upswing. This is clear in the performance of the housing stocks, many of which are galloping higher. New constructions are on the rise, if this trend continues, it should provide another boost to employment. 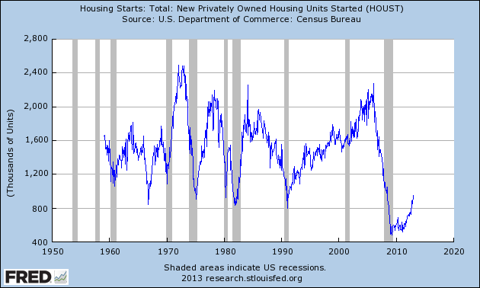 Of course, the big miss was Q4 GDP coming in negative. However, the market shrugged off this bad news and its weakness was attributed to anomalous factors such as the weather and fiscal cliff effects. Again, the theme of the data seems to be very market positive in that it points to an economy that is slowly recovering on the path to sustainable growth however not so fast that the Fed will be moving to remove liquidity from the system. In a sea of positive news, the GDP miss was a reminder that this recovery remains fragile.

In this article from early December, I highlighted the changing composition of the Federal Reserve as a "Christmas present" for bulls due to the doves coming on board. The doves' effect was felt quicker than I expected as the Evans rule was quickly put into effect.

I remain of the belief that it is less the asset purchases but more the change in perception of the Fed's aggressiveness fueling the current bullishness. Recent Fed statements as well as implementation of the Evans rule has made it clear that the Fed will not be taking away the punch bowl anytime soon. Hints of the punch bowl being taken away lie in the data and as the data improves, this removal of asset purchases will begin to be priced into the market. Until then, I think we are following the trajectory of previous QE liquidity based rallies.

This market move began with constructive technicals indicating strong accumulation and outperformance in key sectors during a weak market environment. I think one reason this market has had little resistance as it climbs higher is due to the fear based selling events in the summer due to the threat of EU default and the fiscal cliff drama in the fall. Many weak longs were shaken out during this time.

Therefore, there is less supply at higher prices as those who were doubtful of future prospects probably sold into these capitulations. Many investors and mainstream publications were seriously discussing the possibility of the euro dissolving or the U.S. defaulting on its debt. I think many made decisions with these outcomes in mind. These selling events came with heavy volume at the lows indicating many gave up their positions.

The fiscal cliff turned out to be nothing more than a sideshow for Congress to exercise its ego and do nothing but kick the can down the road. The worst case scenario is off the table in Europe at least in the short term, many of those who panicked at the lows find themselves with cash in a raging bull market and are forced to chase higher prices. Instead of an economy in turmoil, the global economy seems to be improving and stock indexes are higher across the world with many threatening all time highs.

Breadth continues to lead price higher. This is important as it shows that stocks across the spectrum are moving higher and leadership is not thin. Market moves in which breadth was not too impressive are prone to reversals. The below chart shows the relationship between breadth and price: 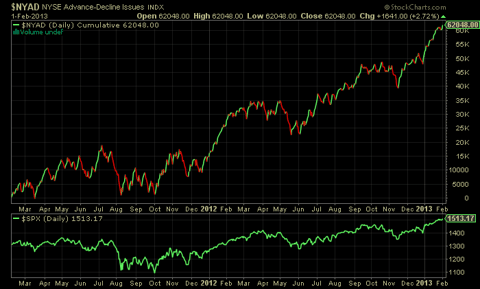 Another positive development for the market is the outperformance of cyclical stocks. Cyclical stocks are more leveraged to the economy and outperform when traders are optimistic about future conditions. For much of 2011 and 2012, cyclical stock performance was woeful with many of them retesting March 2009 lows. Recently, these stocks have picked up and it is a healthy sign for the market that they are joining the party. Without their participation, the gains would not be sustainable. 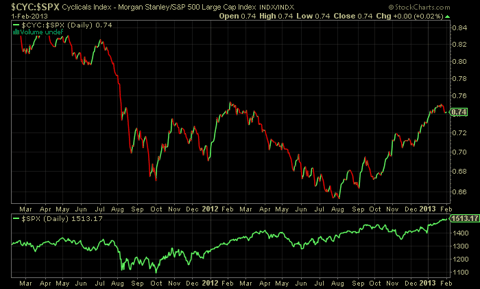 The purpose of this article was to make the case that the three factors responsible for this move are the better than expected economic growth, favorable supply/demand dynamics, and central bank support. Of course, all of these factors are somewhat interrelated.

The economic growth is better than expected due to the effects of the macro events in 2012 which diminished expectations. These macro events also led to reduced supply at these price levels. The central bank liquidity is also tied to economic targets and the Fed has made a big deal out of assuring the market that asset purchases will continue well into the recovery, in the hopes of creating demand for risky assets such as stocks.

Earlier, I was intently focused on the discrepancy between the lackluster data and market signals pointing to a stronger economy. It seems that the market was correct in its anticipation . I will continue to monitor the data and the performance of economically sensitive sectors as an insight into the market's assessment of future conditions.

As long as these trends stay intact, I think it is safe to continue adding on weakness. The market is very overbought on many time frames, so I think it is prudent to exercise patience and wait for a dip. At some point, there will be some sort of profit taking event and I believe this will be an excellent opportunity to increase exposure.

Jaimini Desai
332 Followers
I am an independent trader. I began actively trading in 2008 and my perspective is shaped by the collapse of 2008 and the incredible rally of 2009. My approach consists of seeking out fundamentally strong stocks that are unloved by the market and then assessing general market conditions to manage risk. Outside of the markets, I enjoy playing tennis, working out, and pushing myself to conquer my fear of public speaking.