CME, (NASDAQ:CME), the Chicago Mercantile Exchange, reports their calendar 4th quarter, 2012 before the opening bell on Tuesday, February 5th. Analyst consensus is now looking for $660 million in revenue on $0.63 in earnings per share, for expected year-over-year declines of -10% and -11% respectively. We think the CME story is about waiting on the "great asset allocation trade" from bonds back to equities, but also awaiting the development of the credit default swap (CDS) market, both of which should help volume at CME.

First, the CDS market. The long-standing joke during the mortgage crisis was the story about the portfolio manager who went in to see his boss, and told him, "The good news is I bought credit default swaps on Lehman's bonds." The boss says: "wow, that is great, here is a bigger bonus". And then the PM says, "well, the bad news is I wrote the credit defaults swaps at AIG Financial Products (AIGFP), which is now bankrupt". The boss says, "Wow, you're an idiot and you're fired".

By putting CDS's on an exchange, much like the Options Clearing Corporation or the OCC, there is a clearing corporation between the buyer and seller and risk-management occurs on a daily basis. The mortgage crisis and the CDO's and CDS's were an "over-the-counter" market, thus the buyer was marking the positions and there was no risk-management intermediary in the middle.

The exchanges want to remedy by this by standardizing CDS's and marking the positions to market daily, which forces the buyer to put up collateral should a position move against them, and thus "risk" is managed daily, rather than shoveled under the bed. Unfortunately, a lot of the risk and speculation has been taken out of these markets, so the exchanges like CME will have to wait until volume returns and slowly gets traction over time.

The second opportunity in our opinion is interest rates. With CME's largest contract by volume remaining the Treasury contract. Here is an article we wrote last August on CME and how it benefits from higher interest rates.

One final aspect keeping a lid on the stock, is that with the Mortgage and Credit Crisis in 2008, the regulatory agencies have really sharpened their elbows and have looked hard at the development of new derivatives and such. It seems like the regulatory environment, and the discussions around futures vs swaps versus other risk management tools is taking longer to work through, which means the exchanges are limited as to what they can offer customers, and the approval process takes longer.

The CME is looking at full year revenue declines of 11% in 2012 on a drop of 12% in earnings per share. 2013's current estimates are calling for 7% earnings per share growth on just 3% revenue growth, so expectations are subdued for sure for the next year.

Here is a recent piece we wrote in mid-January, a part of which discusses CME. The stock is no longer oversold, and in fact is overbought, we wouldn't buy more in front of Tuesday morning's earnings report.

While CME's cash-flow valuation is pretty spicy at 20(x) cash-flow and with just a 4% cash-flow yield, the chart looks to be improving since the stock has consolidated now for 4 straight years. We think a major shift in interest rates is the next catalyst to push CME higher. When that occurs is the real question. 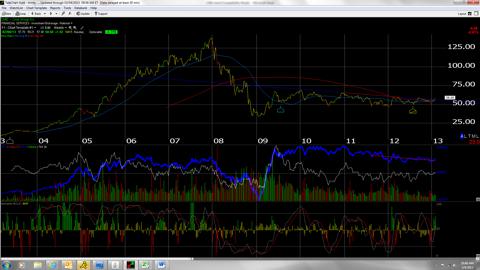 Disclosure: I am long CME. I wrote this article myself, and it expresses my own opinions. I am not receiving compensation for it (other than from Seeking Alpha). I have no business relationship with any company whose stock is mentioned in this article.

Brian Gilmartin, CFA
9.16K Followers
Brian Gilmartin, is a portfolio manager at Trinity Asset Management, a firm he founded in May, 1995, catering to individual investors and institutions that werent getting the attention and service deserved, from larger firms. Brian started in the business as a fixed-income / credit analyst, with a Chicago broker-dealer, and then worked at Stein Roe & Farnham in Chicago, from 1992 - 1995, before striking out on his own and managing equity and balanced accounts for clients. Brian has a BSBA (Finance) from Xavier University, Cincinnati, Ohio, (1982) and an MBA (Finance) from Loyola University, Chicago, January, 1985. The CFA was awarded in 1994. Brian has been fortunate enough to write for the TheStreet.com from 2000 to 2012, and then the WallStreet AllStars from August 2011, to Spring, 2012. Brian also wrote for Minyanville.com, and has been quoted in numerous publications including the Wall Street Journal.