Cyberonics (NASDAQ:CYBX) is up sharply on large volume today (Monday, 2/4). Why? The short seller article (Blowing The Whistle On Cyberonics) that produced the sharp drop (described in my article, Cyberonics - Short-Selling Creates Buying Opportunity) just lost its foundation. Here is the short seller's dire lead-in:

Today, we present our highest conviction exposé yet highlighting folly in the form of a significant valuation bubble. More importantly, we present with the help of a whistleblower - very serious allegations of unscrupulous and potentially fraudulent activity on the part NASDAQ listed: Cyberonics, Inc. These detailed allegations have been documented in an amended complaint filed by the whistleblower in Massachusetts Federal Court just five days ago on January 16, 2013.

Cyberonics Inc. said a former employee voluntarily dismissed without prejudice a lawsuit he filed against the medical-device maker in a Massachusetts federal court.

The employee, former sales representative Andrew Hagerty, had previously filed a wrongful termination suit against the company in which he raised questions about the legality of Cyberonics sales and marketing practices.

Moreover, because fact checking showed the short seller's other claims to be overwrought or just plain wrong, we can now move on. In my previous write-up, I said, "Think about the time when the short-seller report is a distant memory." It looks like that day is near. Now we can say we've just witnessed one of those special, short-term opportunities to buy a growth stock at a value price. Moreover, because short sellers cover their positions quickly and move on, we can presume that the only trace left will be the stock chart's "dip." 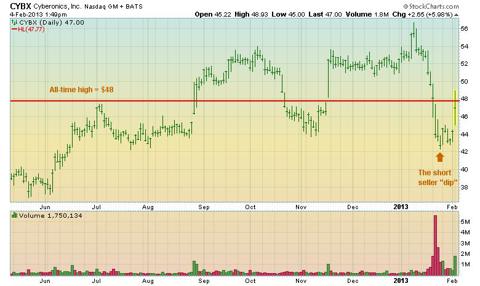 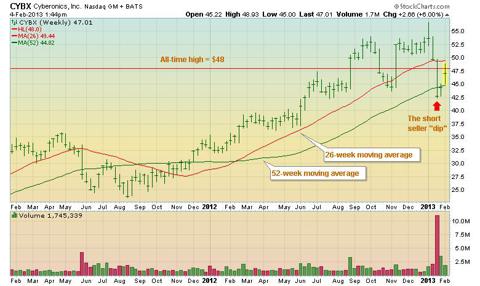 Quick bumps can make for tempting sells, particularly after a worrisome drop. However, this V-shaped pattern seems more like a one-off "wiggle" (think of it as a short seller-induced flash crash). With the cause come and gone, we can move back to focusing on the company's fundamental prospects and the stock's valuation. For now, it looks like a further rise is in the offing as the short seller taint gets completely washed away. I continue to view CYBX as a desirable all-time high, growth stock.

Disclosure: I am long CYBX. I wrote this article myself, and it expresses my own opinions. I am not receiving compensation for it (other than from Seeking Alpha). I have no business relationship with any company whose stock is mentioned in this article. Positions held: Long U.S. stocks

John Tobey, CFA
1.25K Followers
I am the founder and editor of Investment Directions. My career has been managing and consulting to multi-billion dollar funds. Using the widely accepted “multi-manager” approach, I have worked with top investment managers throughout the country, gaining a high level of expertise. My career has spanned many market environments, and I have hands-on experience searching out opportunities and avoiding risks in all of them. I now devote my time to Investment Directions, with the goal of helping investors further their understanding and improve their investing skills. I am currently serving on: The AAUW Investment Advisers Committee and The City of Vista Investment Advisory Committee.
Follow
3 Comments