With the market's strong run, there have been many calls that the March 2009 bottom marked a termination to the bear market that began following the tech bubble. During this time period, the SPDR S&P 500 ETF Trust (SPY) is up more than 100% and the iShares Russell 2000 Index (IWM) is already at all time highs.

Although I am bullish on the markets and see us breaking the 2007 highs for reasons given in this article, I don't buy this logic of a shift in the secular trend. Instead, I believe this is another instance of price affecting psychology. In fact, I think that near the peak of this move, it will become conventional thinking that a new secular bull market began as a way to rationalize the higher prices.

My belief is that this remains a cyclical bull market within a secular bear market. Given the horrid sentiment following the financial crisis and the unprecedented trillions in central bank liquidity, this cyclical bull market has surprised people with its intensity and duration. And, I doubt it is finished. I don't think there is an inconsistency between a market at new highs and a market still classified as a secular bear.

In a previous article, I discussed Warren Buffet's comparison of the late 1990s bull market and the market from 1964 to 1981. The latter time period witnessed a flat stock market despite a time period where GNP and revenue grew five-fold. This was the secular bear market prior to this one and illustrates that secular bull markets tend to end with strong fundamentals and complete disinterest for the asset class.

Another valuation measure that did not reach levels of previous valuation is the dividend yield of the S&P 500.

I think we should see a much more attractive dividend yield and P/E before a true change in trend emerges. Further, there has been no reckoning with the actual problems that created this crisis - excess debt amongst households, lax regulation of financial institutions, and long term budget realities.

Instead, the central bank has simply temporarily ameliorated these problems by flooding the markets with liquidity and hoping time can help damaged banks repair their balance sheets. This artificial cheap money - interest rates below inflation - will create imbalances in the future that will lead to the next crisis.

Following the tech bubble, the Fed helped fuel the housing bubble with low interest rates for an extended period of time, which ended up helping to create a problem bigger than the one it was trying to solve. 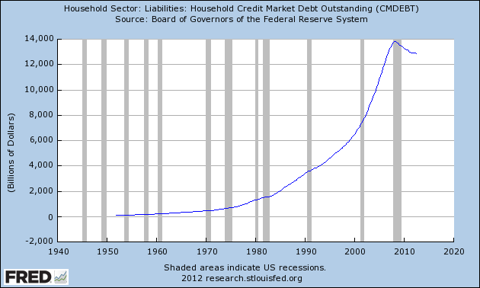 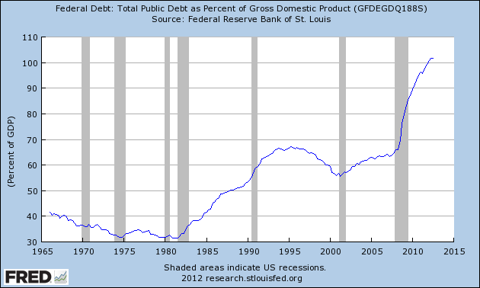 Both charts show little progress in dealing with major problems that were in the news every day when the market was 50% lower. However, these problems have not disappeared, merely forgotten as the rationalization machine, known as the human mind, seeks to justify present conditions and prices.

My contention with this bull market is that it is based on a combination of the economy not being as bad as possible especially given the macro threats faced in the last couple of years, incredibly cheap money, and an aggressive central bank. I discussed these factors propelling the market higher, here. Previous secular bull markets coincided with an increase in productivity, employment, and incomes, basically standard of living. I don't think we are in the midst of such a sustainable rise and the data does not support such a conclusion.

One way to examine this is to look at the stock market vs. commodity prices.

I think both charts are evidence that the primary driver behind this bull market remains cheap money rather than a new age of prosperity driven by productivity growth. One sign of a secular bull market is outperformance of stocks vs. commodities, clearly that is lacking.

Behind previous secular bull markets was some sort of new technological innovation that created massive productivity and entire new job markets. These innovations such as automation, the automobile, plastics, PC, and IT became a source of prosperity for generations. Today, there certainly are pockets of innovation in sectors such as biotech, mobile computing, and manufacturing, however I don't think that these have the potential to create anything more than ripples in the economy. 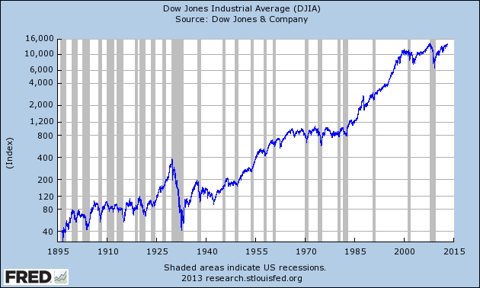 I believe we remain in this sideways range. We are nowhere close to clearing out the excesses generated in the previous bull market in terms of household debt (although things have definitely improved since 2008) and unsustainable promises made by politicians to win votes in terms of spending and entitlements.

Another factor is that the primary driver of this market is central bank liquidity, which inevitably leads to increases in commodity prices which puts pressure on consumer spending. Liquidity creates the illusion of prosperity rather than true prosperity. The cyclical bull market in 2003-2007 was a similar experience of rising asset prices on the backs of central bank liquidity, creating the illusion of prosperity. Of course, all the gains were quickly extinguished except for the debt which was taken on during this time period.

Jaimini Desai
333 Followers
I am an independent trader. I began actively trading in 2008 and my perspective is shaped by the collapse of 2008 and the incredible rally of 2009. My approach consists of seeking out fundamentally strong stocks that are unloved by the market and then assessing general market conditions to manage risk. Outside of the markets, I enjoy playing tennis, working out, and pushing myself to conquer my fear of public speaking.