Ameren Corp. (NYSE:AEE) is an S&P 500 component, utility holding company based out of St. Louis. The company recently announced it plans to "reduce and eventually eliminate support" for Ameren Energy Generating Co. [GENCO.]

The ratings recognize that Genco's parent holding company, AEE, no longer intends to provide financial support to Genco, including funding for the 2018 debt maturity of $300 million, and the significant capital spending required at the Newton coal-fired plant to be compliant with Illinois environmental regulations.

*These bonds are very questionable given recent downgrades and uncertainty about Genco's future.

Genco yields ten times as much as the mortgage bonds, of course they are junk bonds with an uncertain future. St. Louis local financial news reported:

Genco operates a collection of coal- and gas-fired plants in Illinois that produce electricity for the unregulated wholesale market...

Genco does face a short-term liquidity issue, but Ameren has given it a way out: Under a "put" agreement, Genco can sell three gas-fired plants to Ameren for a minimum of $100 million.

That cash should buy Genco time while Ameren decides how to extricate itself.

This article includes commentary from an analyst who considered these bonds to be a buy.

... In exchange for entering into the put option agreement, Genco paid AERG a put option premium of $2.5 million.

With a spiraling credit rating the company would have a very difficult time refinancing, even if it could. Moody's explains:

Ameren Genco will be unable to incur additional borrowings from external sources by the end of first quarter 2013, due to an interest coverage ratio covenant in its bond indenture.

In their 10-Q Ameren projected Genco's compliance with the environmental regulations could cost up to $570M through 2021.

Buried in the company's 10-Q is a warning sign about substantial collateral necessary if market prices go up or down:

Ameren Corp. does around $2B in revenue per quarter, and upwards of $423M in net income annually, on average for the past 3 years. So $183M or $199M in additional collateral would be significant. 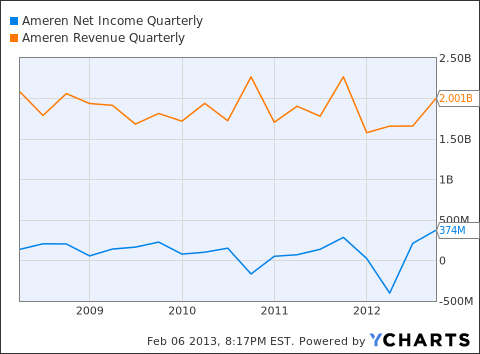 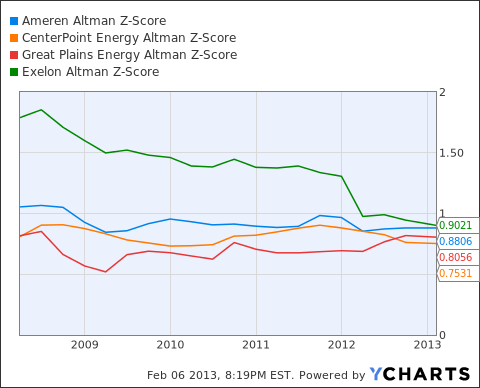 While Ameren ranks higher than Great Plains and Centerpoint, its subsidiary, Genco, is just one component. On its own Genco is a much smaller fish.

As of the annual report Genco had 618 employees, the report describes Genco's Merchant Generation:

Merchant Generation revenues are determined by market conditions and contractual arrangements. We expect the Merchant Generation fleet of assets to have 5,503 megawatts of capacity ... This capacity reflects the closure of the four units at Genco's Meredosia and Hutsonville energy centers and the sale of the Columbia CT during 2011, as well as the sale of the Medina Valley energy center in early 2012 ...

In this instance it would simply cost too much for Ameren to support the business.

Last summer Electric Energy laid off 44 employees; 16% of its workforce. The company tried to delay environmental upgrades, however the state denied their request.

The Ameren annual report remarks in all bold:

Future limits on greenhouse gas emissions would likely require Ameren, Ameren Missouri and Genco to incur significant increases in capital expenditures and operating costs, which, if excessive, could result in the closures of coal-fired energy centers, impairment of assets, or otherwise materially adversely affect our results of operations, financial position, and liquidity.

Investors are hunting for yield, however it is very important to understand Genco is now in a very uncertain position. From 2007 to 2011 Genco's net income went from over $200M to under $50M.

Long-term debt went from $474M to over $800M in the same period; in 2010 Genco repaid $200M in maturing debt. Lower revenue, higher fuel prices and environmental compliance costs have taken their toll.

This will certainly be a tough period for Ameren Genco, and investors should be concerned. Things to watch for would be interested utility companies that might acquire Genco. The former subsidiary's operating revenue could be affected by Ameren's termination of support.

It would cost far more to make the mandated environmental upgrades than Genco can comfortably support within the Ameren business model. Ameren Corp. reports earnings on February 20th; Genco bond investors must pay close attention. For now the 2018 Genco bonds will certainly garner investors' attention; however, it seems wise to tread carefully.

If you have any thoughts on Ameren or Ameren Genco, please leave a comment below.

Disclosure: I am long AEE. I wrote this article myself, and it expresses my own opinions. I am not receiving compensation for it (other than from Seeking Alpha). I have no business relationship with any company whose stock is mentioned in this article. This article is not a recommendation to buy or sell. Please consult a financial adviser to determine proper allocations (if any) towards any fixed income investments, especially regarding companies that are experiencing changes in ownership structure.

Charles Margolis
229 Followers
Just an average investor... primarily in American equity and bonds. (Important Note: My articles, blogs, comments, reference links and messages are not intended to be investment advisements; or to value securities. Examples and considerations are hypothetical and educational. Please consult a financial advisor before making investments in any security. Thank you for reading!)
Follow
46 Comments