Since the end of 1989, the capitalization-weighted S&P 500 has underperformed an equal-weighted version of the index by 1.89% per annum. A dollar invested in the equal-weighted S&P 500 at the end of 1989 would be worth 56% more than the same dollar invested in the S&P 500 constituents at the end of 2012. This article examines the reasons behind this historical relationship, and the relative valuation between these two alternative weighting schemes for the broad market gauge in 2013.

A Historical Look at Value vs. Equal Weighting

Research has shown that there are a number of factors that have led to the relative outperformance of the equal-weighted index over time. In October 2012, Yuliya Plyakha and Grigory Vilkov of Goethe University Frankfurt and Raman Uppal of EDHEC Business School published "Why Does an Equal Weighted Portfolio Outperform Value-and-Price-Weighted Portfolios?" The scholars' work suggests that the outperformance of the equal weighting scheme in the United States over the last four decades is due to a combination of systematic factors, and generates alpha through its periodic rebalancing. This is a powerful statement, and we will work through dissecting it below.

Equal weighting the index constituents produces a portfolio that has higher exposure to two market factors that have systematically produced higher returns than the market over long-time periods: size and value. In Eugene Fama and Kenneth French's canonical work, "The Cross Section of Expected Stock Returns," the authors describe a positive relationship between (small) size, (high) book-to-market ratios and realized average returns that has become enshrined in the Fama-French three-factor model to describe stock returns. Smaller capitalization stocks and high book-to-market stocks have historically had higher levels of risk and produced higher average returns as compensation for this risk.

The aforementioned paper from the trio of German scholars showed that roughly 58% of the excess return was attributable to these systematic components. The remainder of the excess return was gleaned from portfolio rebalancing. As the authors reduced portfolio rebalancing of their model portfolios from monthly to annually, the excess return generated by the equal-weighted strategy reduced. In a second experiment, the authors fixed the weights of the value-weighted portfolios for twelve months. The alpha of the equal-weighted and the now fixed weight value-weighted portfolios were indistinguishable, indicating that it was not the initial weights that caused the return differential, but rather the portfolio rebalancing. When then S&P 500 rebalances quarterly, it must add stocks that have risen in value to reset the capitalization weights. Alternatively, when equal-weighted indices rebalance, they must buy stocks that have underperformed to equate the weights. This contrarian strategy produces long-run alpha.

This contrarian approach should not be confused with my many recent articles on momentum strategies. In momentum strategies, stocks that have outperformed over the short-term tend to continue to outperform over additional short intervals. Equal weighting suggests that stocks that have outperformed over short intervals will eventually mean revert over longer time intervals. The two strategies have different forward holding periods, and generate alpha in nearly asymmetric ways.

This historical relationship that has favored equal weighting has continued in 2013 as the Rydex S&P Equal Weight ETF (NYSEARCA:RSP) has outperformed the SPDR S&P 500 ETF (NYSEARCA:SPY) by 1.38% (7.97% vs. 6.59% through Friday, February 8th). We cannot contribute this outperformance to the rebalancing of the indices because each index will not see its first quarterly rebalancing until the third Friday of March. The outperformance of the equal weighted S&P 500 has to be attributable to the outperformance of the size and/or value factors, or simply that the company's with the largest weighting differentials have underperformed the broader market.

The size factor has likely contributed in part to the equal weighted version of the S&P 500's favorable performance. The S&P Smallcap 600 (IJR) has returned 7.68% in 2013, giving credence to the notion that the size factor has in part driven outperformance. The S&P 500 Value Index (proxied through [[IVE]]), which measures value stocks using the ratios of book value, earnings, and sales to price, has also outperformed the S&P 500 year-to-date as well (7.68% return), extending the explanation of the relative outperformance of the equal weighted S&P 500 to the value factor as well. 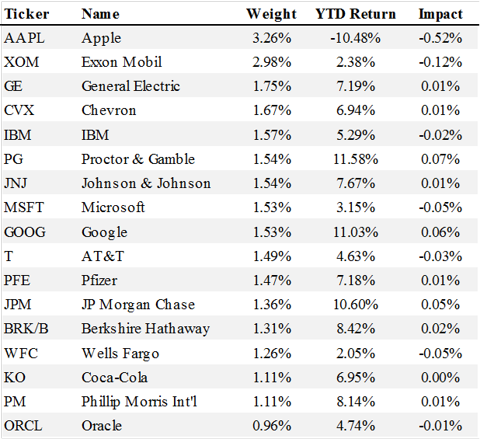 Apple (AAPL) has trailed the S&P 500 by 17.07% year-to-date (-10.48% return versus index's return of 6.59%), so it's incremental 3.06% weight in the S&P 500 versus the equal weighted index has caused a 52bp performance drag for the S&P 500 (-17.07% * 3.06%). Why did I show seventeen S&P 500 constituents? The absolute value of the relative impact of the next sixteen constituents is less than the impact that Apple has had on the return differential of the capitalization weighted and equal weighted indices. Said differently, the impact of Apple's underperformance on the relative return of SPY and RSP absorbs the return differential of the next sixteen largest S&P 500 index constituents.

Over longer time intervals, Seeking Alpha readers willing to take increased exposure to the size and value risk factors can purchase the equal-weighted S&P 500 and should expect to outperform the capitalization weighted index. Part of this outperformance will be compensation for exposure to these systematic risk factors, and a smaller portion will be due to alpha generated by the contrarian rebalancing. In 2013, relative performance of the equal weighted and cap weighted versions of the S&P 500 will additionally be heavily influenced by the performance of Apple. So far in 2013, nearly 40% of the underperformance of the S&P 500 versus its equal-weighted cousin can be explained by the S&P 500's 16x higher weighting to Apple, which has materially underperformed.

I hope this article helps Seeking Alpha readers better understand the long-run risk profile of this alternative weighting scheme, and also frames the importance of having a view on Apple, the most heavily debated stock on Seeking Alpha, even for investors who choose to passively index.

Disclosure: I am long SPY, RSP. I wrote this article myself, and it expresses my own opinions. I am not receiving compensation for it (other than from Seeking Alpha). I have no business relationship with any company whose stock is mentioned in this article.

Ploutos
21.14K Followers
Institutional investment manager authoring on a variety of topics that pique my interest, and could further discourse in this online community. I hold an MBA from the University of Chicago, and have earned the CFA designation. My articles may contain statements and projections that are forward-looking in nature, and therefore inherently subject to numerous risks, uncertainties and assumptions. While my articles focus on generating long-term risk-adjusted returns, investment decisions necessarily involve the risk of loss of principal. Individual investor circumstances vary significantly, and information gleaned from my articles should be applied to your own unique investment situation, objectives, risk tolerance, and investment horizon.
Follow
16 Comments