In the age of the iPad and driverless cars it is no small feat for a coffee seller to be named the world's most buzzed brand. Starbucks (NASDAQ:SBUX) is the intersection of brand management, technology, innovation, leadership and relentless growth. It is a company that knows how and when to hit the refresh button on its brand to keep it fresh and reinvigorating. Who knew that a coffee roaster that started in 1971 would be streaking towards 20,000 stores by 2014, operating in 61 countries, and employing about 200,000 partners (employees)? Starbucks decided from the outset to make coffee sexy - Demi, Grande, Venti, Trenta - and evolved across its supply chain to be a major coffee buyer, coffee seller and everything else that is complementary to its core business. This is a company that makes actual products, owns retail stores, owns brands and insists on trying to do right by its ecosystem of stakeholders. It has perfected the art of transferable scalability in its operations and has its fingers on the multiplication button of growth. It does this by leveraging technology, innovation through R&D, social media and consumer insights to satiate the nuances of its customers. Make no mistakes, coffee is a commodity and competition is robust and the risks are real. There is a maxim that says it takes 99 days to build a brand and one day to destroy it. Starbucks can never live to see that one day because if that one day comes Nestle, Coke (NYSE:KO), McDonald's (NYSE:MCD), Burger King (NYSE:BKW), Dunkin Brands Group (NASDAQ:DNKN) and every gas station across the country will be waiting in the wings with quality brews to serve its customers.

Starbucks has evolved greatly over the years but at its core it is still a coffee company and that is exactly why its customers know exactly what it stands for. As Alphonse Karr stated, "The more things change the more they stay the same". Starbucks looked at the cups of coffee it brews and asked what it could do around selling cups of coffee to make the consumption experience for its customers lasting and different. It created a Channel Development and Emerging Brands group to essentially mimic P&G and Nestle to become a CPG company. It is this group that brings you the products you find in retail outlets either directly or through licensing agreement with other manufacturers. Products that you can enjoy at home and that reinforce their products/brand and make it hard to switch to competing products. Starbucks is also expanding its store count very rapidly to make sure that it becomes a preferred intermediate destination away from home, work or play. The table below shows how much Starbucks changed while staying true to its core competency of coffee. 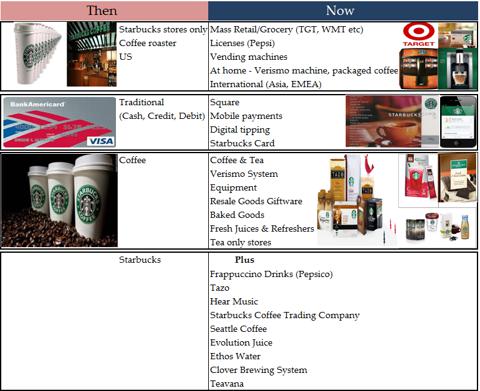 The Heart of Starbucks:

Every successful company has an intangible component at its core that is not easily imitated. At Starbucks it is Howard Schultz, the current CEO. Most retailer earnings calls are replete with references to shareholder return, same store sales, new strategic initiatives and YOY revenue. Rarely do you hear a company whose leader takes as much pride in the strategic vision of his company as in making sure the interests of the stakeholders are integrally woven into the success of the vision. Howard Schultz does and it is no coincidence that when he left the company it struggled. He had to come back to rescue the company from severely depressed stock prices, reduced customer loyalty and even had to close underperforming stores to get costs back in line.

He removed "Starbucks Coffee" from the company logo because he understood that the company could be bigger than coffee. He has maintained the focus on coffee as part of a more ambitious plan to become a CPG company. He has also hired a competent leadership team around him and is growing the company in the U.S. and internationally. Above all, he is keeping the Starbucks brand fresh and reinvigorating across all product lines. The company provides full insurance and a stock options program to full time/part time employees and is one of the leading resellers of certified fair trade coffee. It has embraced technology from payment systems to operational standards, social media to brewing techniques, and even uses digital networks to ensure that customers identify with a "Starbucks Experience" across multiple mediums and places of consumption.

(All from Scottrade unless otherwise noted)

Against the industry it compares favorably in profitability, financial and valuation metrics. Against its peers its margins are not as favorable - see table below. 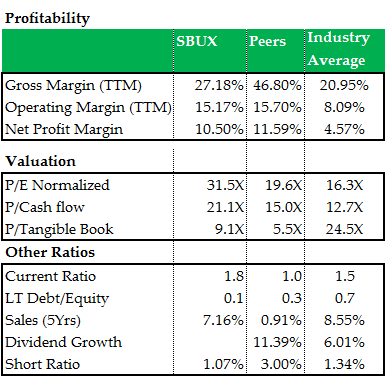 Shares of Starbucks have been very bullish in the last year trading above its 50 and 200 day averages of $56.63 and $50.21 respectively. The chart shows an interesting pattern of ebbs and flows with the intensity steadily decreasing overtime and indicating a possible pivot. I would set my target due to recent results and positive sentiment for the stock to hit $62 in 2013 which is a 10% gain from recent levels of $56.00 without including dividends. 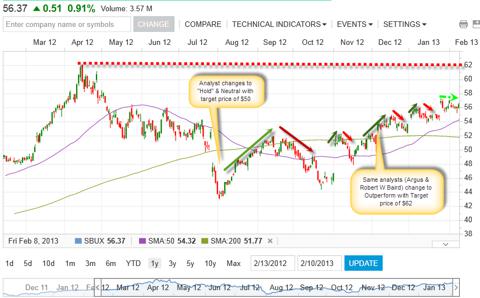 I like Starbucks for its focus, its execution capacity and the goodwill it is building around its brand. I like the fact that along with its growth potential it pays a dividend. I like its history of 2-for-1 stock splits which it has done 5 times since 1993 with the last coming in 2005. I like the fact that it is extremely innovative and has been successful at growing its business outside of the U.S. and in areas with administrative and cultural challenges. I like the fact that it has been able to compete successfully against very capable competitors and that it has been able to grow topline revenue. Its margins are always going to be squeezed but as long as it keeps integrating its new business lines and expanding into adjacent areas it will sooner rather than later have PepsiCo Inc. (PEP) and Unilever (LON:ULVR) in eyesight.

Disclosure: I have no positions in any stocks mentioned, but may initiate a long position in SBUX over the next 72 hours. I wrote this article myself, and it expresses my own opinions. I am not receiving compensation for it (other than from Seeking Alpha). I have no business relationship with any company whose stock is mentioned in this article.

Benedict Tubuo (Beevest)
142 Followers
I enjoy corporate strategy especially the influence of strategic choices on stock performance and corporate earnings. Good strategic choices influence customer choices, corporate relationships and the quality of earnings. That's the focus of my curiosity and optical lens through which I write and read articles. I am a graduate of the Carlson School of Management with an MBA in Finance and Strategic Management. My other interests are business development, working with small businesses and cycling. How may I help you?
Follow