The concept of numbers and accumulating wealth was a fascinating topic for me as I delved into my investing adventure. In the beginning I did not truly realize the significance of investing and thought of it merely as a game and a risk that I could legally take. As my father had always been heavily involved in the stock market and seemingly knew how to grow his money confidently, I became more enthralled with the concept.

He taught me the fundamental principle that we were investing in companies and as owners, we would reap a percentage of the profits in return. He explained to me the historical average returns of the stocks and that over time they grew at an average annual rate of around 10 percent.

He saw something that most people did not see or understand. He valued money more for the freedom that it gave him and his family. It was not about trying to obtain money in order to buy wasteful luxury items that were over-priced, such as Burberry, Prada and Gucci that are like drugs for the superficial person who tries to impress his or her friends. He is like Warren Buffett, except on a smaller scale. If he had a lot more time, he would in fact get there and probably would live a similar lifestyle to Mr. Buffett.

The two different scenarios that differentiate me from my father's investment strategy have to do with the different stages of life that we are in. The father's primary goal is to monetize his portfolio so as to invest for retirement income so that he can feel comfortable with a large dividend income and keep growing it over time. In this way, he will always stay ahead of inflation and not run out of money in retirement. It is just like the snowball effect when you build that giant snowman as a child. And yes, it's a lot of fun when the ball is humungous at the end.

This is a great strategy, however it was late that he began using this great dividend strategy; but it is still great, nonetheless. Higher yields over 5 percent comprise most of his portfolio. On the other hand, I have understood that I have a great deal of time relative to most working adults and am focused more on the dividend growth companies that have lower yields, most under 5 percent but higher than 3 percent. These yields, however, will on average double in around 6-8 years, which will in turn give the original investment a much greater yield. It would not be unreasonable to see an investment like Johnson and Johnson (NYSE:JNJ) turn into a 50 percent yield or greater on that original investment, 40 years into the future.

I am 99.99 percent confident that if you choose all blue chip dividend growth companies that have historically increased their yield for over 30 years, you will have a significant stream of income flowing in, and one that is extremely reliable. There are many uneducated investors who look at the yield alone and grab for that 10 percent yield quickly, only to see it get cut shortly after and have the stock price tumble with it as well. This can lead to disastrous results and one should take great caution upon investing in ultra-high dividend yielding stocks (over 7 percent).

Many individuals in their 20s and 30s barely contribute to retirement accounts or even think about retirement. They begin way too late to have the forces of compounding occur significantly in their favor. I do not mean that late bloomers should give up, but the earlier the investor realizes the importance of compounding, the better. Once your secondary source of income has become greater than your primary working source, you have truly won and accomplished a great goal. It means that I am fortunate enough to realize that every year that goes by without investing and reinvesting I would be losing out on thousands of dollars due to compounding.

The stocks that I am now primarily investing in are dividend growth stocks. The mindset of owning these stocks, such as McDonald's (NYSE:MCD) and Eli Liily (NYSE:LLY), is certainly not a get-rich mentality whatsoever. We begin very slowly, especially in the first 10 years, if we do not have a large sum to begin with. If you are fortunate enough to have amassed a small nest egg by the time you are in your early 20s and live way below your means, then you are in great shape.

I happened to take a great deal of risk at the start of my investment career because my dad said, "You're young - take some risk, you have plenty of time to make up for it if things go wrong." I am glad I took that advice and did not have to worry about large bills to pay due to my financially responsible parents who have been very generous.

For example, in 2007 I invested 70 percent of my capital into homebuilders like Lennar (NYSE:LEN), Pulte Homes (NYSE:PHM), Beazer Homes (NYSE:BZH), Kauffman and Broad (NYSE:KBH) and Hovnanian (NYSE:HOV) that had high betas over 2 and sometimes 3. My portfolio would consistently go through swings of over 2 percent. This had its highs and lows, and many sleepless nights of concern. Ironically, this was over only a few hundred dollars, which back then seemed like a lot of money. Now a day of a $1,000 swing in my portfolio is somewhat routine and does not faze me mentally. As of now, anything over $1,500 per day is pushing my comfort threshold. In 5 years my zone of discomfort will probably be a $3,000 threshold day.

I soon realized that I needed to diversify my risk into even more risk. So I began investing in casino stocks in 2009, such as Las Vegas Sands (NYSE:LVS) and Melco Crown Entertainment (MPEL). I took a look at the charts and "easily" projected out that these prices were dirt cheap and the market had "irrationally" sold off these stocks and priced them at irrational levels. If I looked at the underlying fundamentals of these companies, I probably would have been very afraid to invest in them. The chart was good enough for me back then to indicate that this was a great time to buy. Look how low it is now and how high it was then. I mentally told myself to hold on for 40 years just to see what would happen with them. Three years later I am happy that I had that mentality and went through those volatile swings. I have tripled on casino stocks, homebuilders, and oil refineries. Western Refining (NYSE:WNR) is my best performing stock. It is almost an eight-bagger for me, having gone from $4.80 to $37.00, and will probably be over $50 in a couple of years.

After these run ups, I began finally to shift into much safer investments with my new capital. I read many articles about dividend growth and compounding. The three biggest factors to successful dividend investing are dividend growth, reinvestment, and new capital invested on a routine schedule in order to dollar cost average your position. Contrary to most investor views, we actually would like the market to go down significantly in the shorter term so that we can have the opportunity to buy cheaper, get a higher yield and buy more shares. This may seem hard to do in reality when your investments are going down each day, but on paper it makes the most logical sense to make the most cents!

I have calculated conservative estimates of the income I would be obtaining throughout the years. Projections such as being able to save/invest $1,000 per month are reasonable for my living standards. (It will probably be double that amount once I am married). The results in the beginning are nothing to write home about. 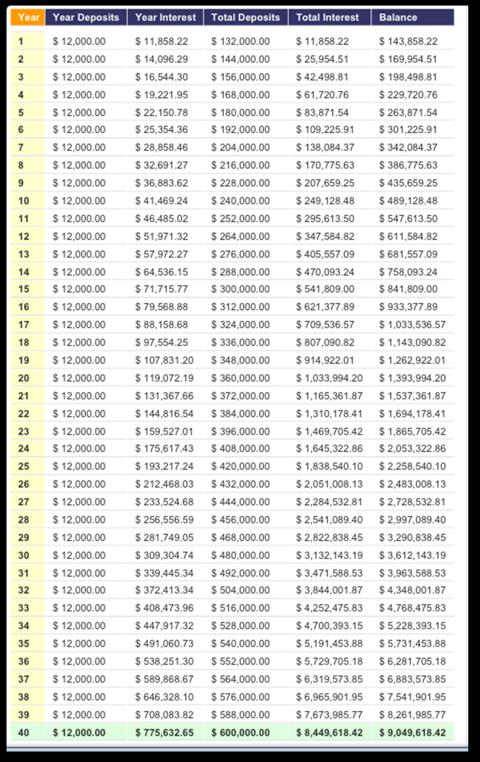 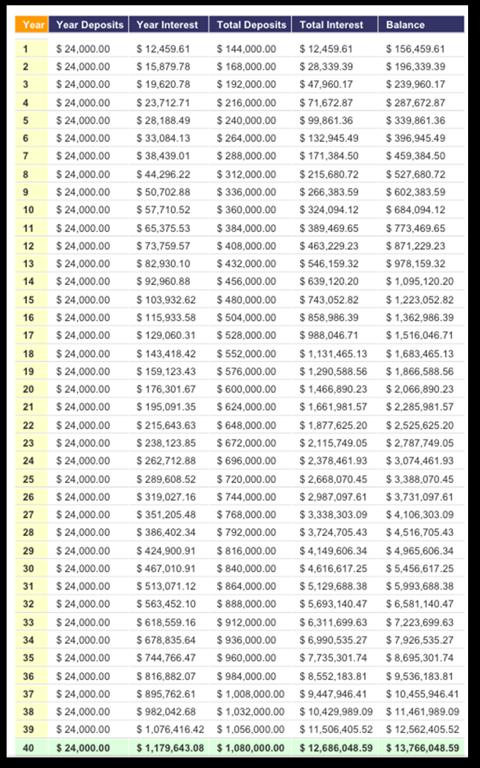 The result near the age of the mid 40's will be a dividend income of over $100k. This is solely due to the fact that I have realized at a very early age what investing the "smart, boring" way can do over time. This is credited to my father who got me interested in this concept of compound dividend investing. This discipline, and knowing that it will grow faster and larger in the later years is the most compelling aspect of this whole strategy. They say patience is a virtue. I am sure it will literally pay off to give me more freedom which is what most of us ultimately strive for.

The person who is completely risk-averse and has her money sitting in a very low interest-bearing account will fall behind inflation and suffer an erosion of purchasing power. You may as well get more value out of your money today by spending it, than have it sitting and not work for you, all the while losing its purchasing power.

Ironically, I deal with somewhat wealthy clients on a weekly basis. A client who is an economics professor at a prominent New York college tells me that he does not put anything in the stock market. I am wondering how this man ever became an economics professor if he does not understand basic investment strategies and put them to use. We need to foster an educated youth focused mainly on personal finance and dividends as a secondary source of income evolving to a primary source of income in retirement. Maybe then students will come out feeling like they have some true relevant education that has the power to change their lives.

There are a few key characteristics that will make a great candidate for this long term successful retirement strategy: 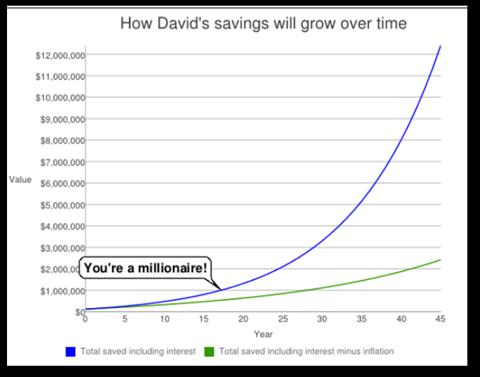 Having these 5 key elements will almost guarantee a very successful financial future.

If you are past your 20s or 30s, focus on the now and contribute as much as you can to play catch-up.

Again, money is freedom and will allow you the comfort not to worry about going out to work at a job you do not enjoy. A little sacrifice and discipline will go a long way so that you can enjoy an upward slope to your golden years rather than the opposite.

You do not need to have a super-high-paying job. You can still have a job that you are passionate about and reach these goals. The key is to live below your means and remain disciplined. A hardworking couple with a household income of $60 thousand can very well become multi-millionaires and prove to those broke celebrities how simple it is to do better than the "rich and famous" .

Disclosure: I am long JNJ, LLY, BMY, ED, COP, MCD, PSEC. I wrote this article myself, and it expresses my own opinions. I am not receiving compensation for it (other than from Seeking Alpha). I have no business relationship with any company whose stock is mentioned in this article.

Follow David Schneider and get email alerts
+
Add a comment
Disagree with this article? Submit your own.
To report a factual error in this article, click here.
Your feedback matters to us!