On February 27th Apple (NASDAQ:AAPL) will host its annual meeting of shareholders. While much attention is being paid to the company's holdings of cash and marketable securities and the recent sell-off in the share price, very little attention is focused on the company's organic growth.

In the December quarter, Apple's revenue rose nearly 27% on an equal week basis and the company reported record revenue and net income in the 13-week period. The impact of "share creep" from stock-based compensation reduced earnings per share $.06 year-over-year despite a $14 million gain in net income and the 14-week prior-year quarter reduced the rate of reported revenue growth to about 17.7%.

Due to extraordinarily high gross margin in the December and March quarters of FY2012, Apple will report negative earnings per share growth in the first six months of the current fiscal year. Although I expect sequential margin recovery from the December quarter's 38.63% through the March quarter of next fiscal year, Apple's rate of earnings per share growth in FY2013 will be the lowest rate of growth in the company's recent history. But there's much more to Apple's growth story.

Apple manages its businesses on a geographic basis. With the release of the company's December quarter results, management created an additional revenue region called "Greater China" and now reports revenue from other countries in the former Asia-Pacific revenue region as "Rest of Asia Pacific."

Illustrated below is the percentage of recognized revenue delivered by each of Apple's revenue regions in the last fiscal year. 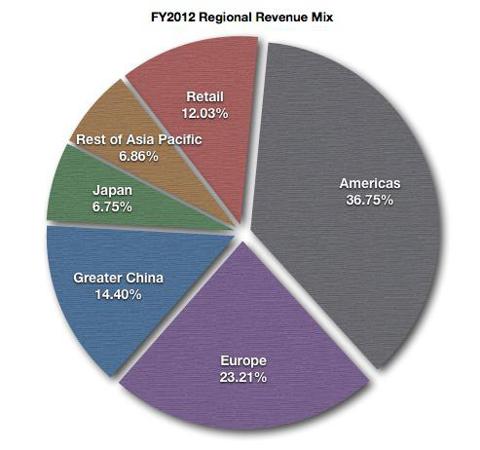 Last fiscal year, both the United States and China represented more than 10% of Apple's reported revenue. The graph below illustrates revenue by region in the fiscal year and the corresponding rates of regional revenue growth.

In FY2012, Greater China and Japan represented Apple's fastest growing revenue regions. Although the rate of growth in Japan during FY2012 was amplified by the severe economic impact of the tsunami in the prior fiscal year, it's interesting to note the iPhone is not currently available on the largest national carrier in either revenue region.

Due in part to expanded distribution of iPhone and iPads, the percentage of revenue delivered by Apple retail has also been on a slow decline. The consumer migration away from conventional PCs to iPads is impacting the performance of the company's retail stores. In the December quarter, Apple's inability to deliver sufficient quantities of its new iMacs may have adversely impacted retail store performance in the period.

As expected, the costs of operating brick and mortar retail stores relegates the retail region to the lowest percentage of operating income per revenue dollar among the company's six regions. The retail stores are Apple's primary vehicle for product marketing and customer relationship development and have value greater than the percentage of revenue and operating income contributed to the company's overall performance. Necessarily, decisions concerning retail store site selection and geographic placement must be made carefully. At the end of the December quarter, Apple had 401 retail stores open for business with about 150 of the stores located outside the US.

Managing For Margin
Apple manages its businesses by region and manages growth with margin in mind. In the December quarter, Apple refreshed the iPad with Retina display and introduced the iPad mini. The company also released a major refresh of its iMac personal computers and realized the first full quarter of sales of the popular iPhone 5 handset.

The high costs of new product releases occurred in a quarter with the most challenging prior-year results for comparison purposes in the company's storied history. Gross margin in the current quarter will be no match for the record 47.37% gross margin outcome in the prior-year period. Due to unsustainably high gross margin in the first six months of FY2012, Apple will report negative net income and eps growth for the first six months of the current fiscal year. The sequential rise in gross margin commencing this quarter from the December quarter's 38.63% and extending through the March quarter of FY2014 will create a vastly different profit picture than the one that's painted today. Continued growth in Greater China and Japan are essential for net income and earnings per share growth recovery.

Conclusions
Greater China and Japan are currently Apple's fastest growing and most profitable regions on a per revenue dollar basis. The eventual additions of China Mobile and Japan's Docomo as authorized iPhone carriers will spur growth in each of the two revenue regions.

Managing for margin necessitates a deliberate plan for retail store expansion and continued expansion in the Rest of Asia Pacific revenue region. Analyzing Apple's performance on a regional basis provides insights into the company's approach to regional growth and overall geographic expansion.

Posts At Eventide
849 Followers
I am the founder of the Braeburn Group of independent AAPL analysts and author of the Posts At Eventide web presence. The objective of my work is to benefit readers seeking to understand Apple's financial performance and to provide a repository of information and analysis at my web presence for other independent AAPL analysts preparing quarterly estimates and share price forecasts. In addition to following Apple, I maintain a keen interest in the personal technology product markets and follow publicly traded enterprises offering technology products and services to consumers. Robert Paul Leitao