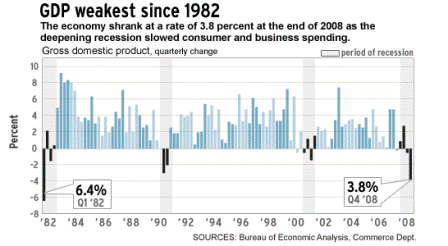 Back in 2001, in a Fortune magazine article, Warren Buffett presented a chart comparing the total market value of U.S. based business as a percentage of GNP. An update of that chart is presented below (). In the article Buffett said, “If the percentage relationship falls to the 70% to 80% area, buying stocks is likely to work very well for you." Currently this ratio sits below 75%.

I compared the market value of U.S. equities using the Wilshire 5000 index which comprises all stocks traded on the major exchanges in the U.S. I then compared it to GDP, a decent proxy for GNP. At the November 20th low, the percentage relationship between the two figures was 64% (Wilshire 5000 = 7.4 trillion and GDP = 11.7 trillion) and by the end of December remained below 80%.

Even if the market breaks through the 800 level, which who knows, it might, I am still on the side of this being a new bull market.

Disclosure: I and the clients of Brick Financial Management, LLC own shares of iShares S&P 500 Index ETF but positions can change at anytime.

Benjamin Taylor
16 Followers
Benjamin B. Taylor serves as President/CEO and Chief Investment Officer of Brick Financial Management (http://www.brickfinancial.com/) and manages Brick’s Choice, Relative Value and Balanced portfolios. Ben provides leadership, strategic direction and oversight of the day-to-day operations of the firm. Ben has over 13 years of experience in the financial services business including research, security analysis and portfolio management. He began his career in financial services a consultant with KPMG Consulting. After KPMG and prior to founding Brick Financial, Ben worked for several years at the investment banking firm of Lehman Brothers. While at Lehman, he refined the value-oriented investment philosophy that he uses in guiding the portfolios of Brick Financial’s clients. Ben earned his B.A. from Lehigh University in Pennsylvania. He is an active member in the New Jersey chapter of the National Association of Black Accountants (NABA (http://www.nabainc.org/)), the CFA Institute (CFA (http://www.cfainstitute.org/)) and is a CFA® candidate. Ben is active in his community and is a fitness enthusiast.
Follow
18 Comments
To ensure this doesn’t happen in the future, please enable Javascript and cookies in your browser.
Is this happening to you frequently? Please report it on our feedback forum.
If you have an ad-blocker enabled you may be blocked from proceeding. Please disable your ad-blocker and refresh.