The prices of silver and gold continued to tumble down during last week. Their downward trend may have been ignited by publication of the minutes of the FOMC meeting that raised the speculation around the future steps of the FOMC vis-à-vis its QE3 program. Will gold and silver continue to plummet this week? As I have stated in the latest precious metals weekly outlook, several reports, events and publications may affect bullion prices. These items include: testimony of Ben Bernanke, core durable goods, U.S. GDP for the fourth quarter, China and U.S. manufacturing PMI, EU monetary development, and U.S. jobless claims. On today's agenda: China's flash Manufacturing PMI and the Italian Parliamentary Election. 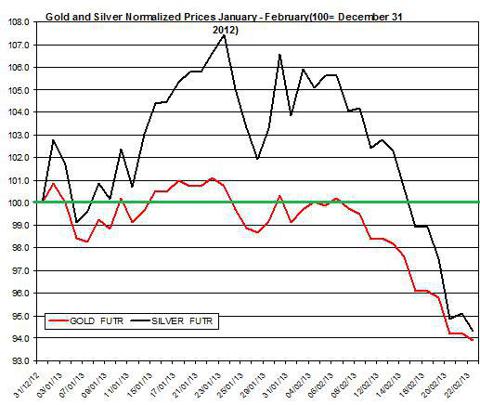 Flash China Manufacturing PMI: HSBC will conduct this survey which will cover 800 companies in 20 industries in China. As of the recent Manufacturing PMI survey referring to January 2013, the Manufacturing PMI increased to 51.9. This index indicates the developments in China's manufacturing sector's growth rate. If the index continues to rally, this may positively affect precious metals prices.

The Euro/ USD edged up on Friday by 0.03% to 1.3194. During the previous week, the Euro/USD also declined by 1.24%. Moreover, some currencies such as the Canadian dollar also depreciated during last week against the USD by 1.5%. The recent depreciation of Euro and other "risk related currencies" may have moderately affected precious metals rates. The correlations among gold, Canadian dollar and Aussie dollar remained stable in recent days: during January/February, the linear correlation between gold and USD/CAD reached -0.21 (daily percent changes); the linear correlation between the gold and AUD/USD was 0.36 (daily percent changes). These mid-strong correlations might imply the recent decline of gold and silver rates was partly affected or resulted from the shifts in the foreign exchange markets. Thus, if the Euro and other risk currencies will continue to depreciate against the USD, they might adversely affect gold and silver.

Prices of precious metals tumbled down during last week. Moreover, since the beginning of the month, both gold and silver also plummeted. The appreciation of the U.S. dollar against leading currencies during the month may have contributed to the decline of precious metals. But I still think the developments in the foreign exchange market were the secondary effect on bullion rates. The signs of recovery of the U.S. economy along with the speculations around the Fed's next move, which might include putting a time limit on the QE3 program, could keep lowering the demand for precious metals as investments.

The U.S. long-term treasuries' yields slightly declined last week (10 year notes reached 1.97% yield by Friday), but they are still higher than the yields recorded back in 2012. The increase in yields may have coincided with the decline in demand for safe haven investments such as gold and silver. The upcoming U.S. related reports of this week include manufacturing PMI, new and pending home sales, core durable goods, GDP for the fourth quarter, and jobless claims. They could affect not only the USD but also precious metals rates. If the U.S. economy will show signs of progress, it could pressure up the USD and thus adversely affect bullion prices. Bernanke's testimony could affect forex and commodities markets if he will provide some additional insight regarding the future steps of the Fed. Finally, if the Euro and other "risk currencies" will depreciate during the week against the USD, they may also pull down precious metals.

For further reading see" Why Isn't Gold Pulling Up?"