In April, 2012, I discussed two pharma bear raids: one on Dendreon (NASDAQ:DNDN) and the other on Pozen (POZN). Today, I'll update you on the SEC's progress in bringing the perpetrators of the DNDN Bear Raid to justice.

Recall that on April 28, 2009, just as then-Dendreon President and CEO Dr. Mitch Gold was preparing to tell the world that the corporation had succeeded in assembling the data required to secure the approval of Provenge on a conference call specifically scheduled for this purpose, something strange happened. Shortly before noon, someone named 'monthaphumchareon' posted the following announcement on Yahoo!'s DNDN message board:

Shortly thereafter, around 1:15 ET, Dendreon's stock dropped. I don't mean it dropped just a few a points a la the 9% drop in Apple (OTC:APPL) stock last year on a 100-share trade that sent everybody and his brother running around with their hair on fire. I'm talking about a whopping 69% drop from $24.50 to $7.50 in…get ready for this...75 seconds!

You can see the carnage below, courtesy StockChart.com. And to top it off, FINRA and the SEC looked, yawned, and let all of the trades stand. This so angered Sen. Chuck Grassley that on August 6, 2009, he sent a letter to the SEC's Office of the Inspector General, demanding an investigation. 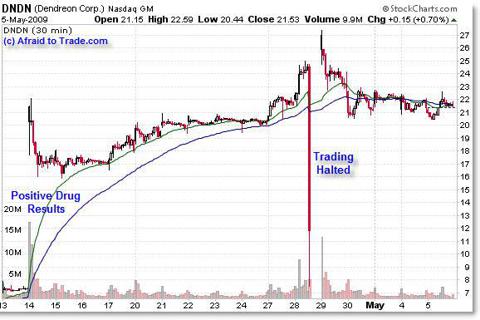 The result was Report OIG-521. The Report, signed by then-IG H. David Kotz, had the entire last page of text (among other areas) redacted with reference to '((b))(7)(A).((b))(7)(C).' This is a quote from the cover letter I received with my copy of the Report from the SEC's Freedom of Information Act (FOIA) Office, stating to what this reference refers:

Further, we are withholding certain information within OIG-521 pursuant to 5 U.S.C. §552((b))(7)(A), 17 CFR §200.80((b))(7)((i)). This exemption protects from disclosure information compiled for law enforcement purposes, the release of which could reasonably be expected to interfere with enforcement activities. Because the underlying circumstances may change, we may later disclose some of this information. If you wish, you may make another request six months from the date of this letter.

The repeated FOIA requests I submitted to the SEC over the last 2 years at 6-month intervals yielded no new information. So, in November, 2012, I filed a formal Appeal with the SEC's Office of the General Counsel, seeking the release of more specific information pertaining to the redacted material withheld under FOIA Exemption 7(A). While the FOIA Officer reviewing the document last month determined the information on pages 5 through 7 of the Report should continue to be withheld under Exemption 7(A), the SEC staff advised the General Counsel that "...selected passages could be released without unduly harming on-going aspects of the enforcement proceeding." (italics added)

So, aside from whatever we may learn by comparing the newly released Report with the earlier version, the cover letter, at the least, confirms that there continues to be an ongoing investigation related to a law enforcement proceeding in the matter of the Dendreon Bear Raid. Whether it's of a civil (SEC) or criminal (FBI) nature, however, cannot be determined.

What can we learn by comparing the version of the redacted Report just received with earlier versions? The areas were redactions were reduced are found on pages 5 through 7. I'll summarize the new information released below:

1. The SEC's Enforcement Division opened an inquiry into the alleged bear raid on April 29, 2009, one day after the precipitous drop in Dendreon's stock price.

2. Enforcement was aware of the Yahoo! message board posting and considered it an important part of the investigation.

3. The Enforcement staff actively investigated the Yahoo! message board posting and possible manipulation of Dendreon's stock.

4. All material provided to the SEC OIG by Sen. Grassley had been forwarded to the Enforcement Division.

5. The Enforcement Division secured a formal order and issued subpoenas. To this end, the following comment is found in the latest version of Report OIG-521:

(It's interesting to note, here, that in his book, The Dendreon Effect: How Felons, Con-Men and Wall Street Insiders Manipulate High-Tech Stocks (the online, earlier version can be found here), Mark Mitchell writes that his investigators tracked the source of the Yahoo! message board posting to an apartment building in Las Vegas, NV (p. 221).)

6. The SEC's Enforcement Division identified and located the person responsible for the message board posting.

7. The SEC's Office of Market Surveillance has been analyzing ALL [emphasis added] of the trades in Dendreon stock that occurred on April 28, 2009.

8. According to [a named SEC analyst], Enforcement's analysis of the trading in Dendreon stock on April 28, 2009, indicates that many of the trades were triggered automatically by stop-loss orders and that the precipitous, temporary drop in Dendreon's stock that day was caused, in large part, by the "cascading effect" of those trades." (Footnote 7)

At this writing, then, we still await the final resolution of the ongoing law enforcement actions.

1. The SEC's law enforcement investigation into the Dendreon Bear Raid of April 28, 2009, continues.

The Daily chart, courtesy StockChart.com, shows the stock trading between the 50- and 200-day moving averages. The Relative Strength is neutral, and the MACD is negative, but appears to be turning. 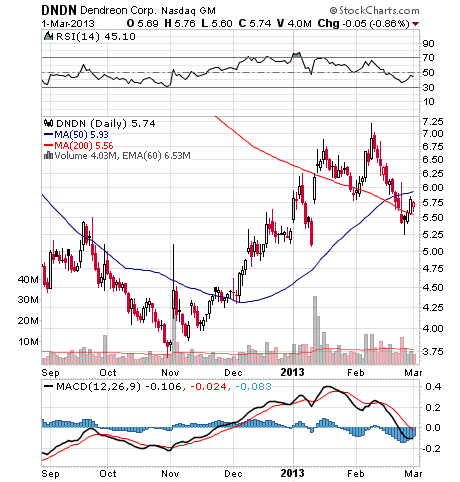 As to the Weekly data, the average price is just under the 50-week moving average. The Relative Strength and MACD are neutral. 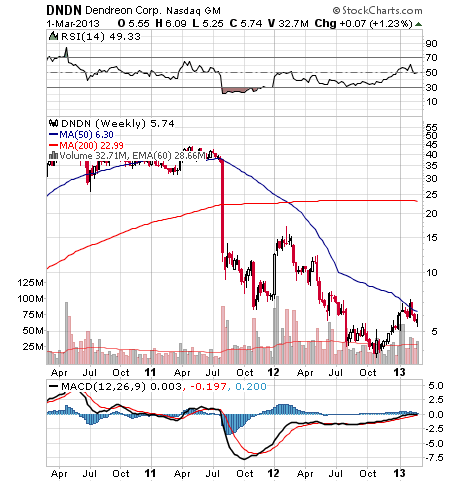 Disclosure: I am long DNDN. I wrote this article myself, and it expresses my own opinions. I am not receiving compensation for it (other than from Seeking Alpha). I have no business relationship with any company whose stock is mentioned in this article.

Additional disclosure: I am long DNDN and the May 2013 $3 PUTs. I am not a registered investment advisor and do not provide specific investment advice. The information contained herein is for informational purposes only. Nothing in this article should be taken as a solicitation to purchase or sell securities. Before buying or selling any stock you should do your own research and reach your own conclusion. It is up to investors to make the correct decision after necessary research. Investing includes risks, including loss of principal.

Theodore Cohen
722 Followers
Theodore J. Cohen, Ph.D., a research scientist, has been an investor for more than 50 years. Since 1980, he has focused his attention on investment research and investigative analyses of companies developing therapeutic drugs in the biotech sector. Dr. Cohen is a frequent contributor of Guest Opinions (op-ed pieces) to the Bucks County (PA) Courier Times (circulation: 80,000), where, since 2007, he has addressed such varied subjects as the conflicts of interest (COIs) associated with two members of the Provenge advisory committee (AC); the U.S. Senate’s Durbin Amendment, to tighten COI reviews of FDA AC members; and naked short selling. Cohen is the author of the award-winning novels Death by Wall Street: Rampage of the Bulls (AuthorHouse, 2010) and House of Cards: Dead Men Tell No Tales (Outskirts Press, 2011), which were inspired by real events. The books are available from Amazon.com, B&N, and 26,000 online bookstores worldwide. For details, see http://www.theodore-cohen-novels.com.