It's no secret that precious metals have disappointed many investors in recent months after prices failed to move higher following the announcement of more money printing by the Federal Reserve late last year.

So far in 2013, gold and silver have moved steadily lower based in large part on the idea that despite the central bank creating $85 billion per month in new money, inflation is not a near-term threat (and maybe not even a long-term concern).

In recent weeks, investment banks have been falling over themselves in an attempt to downgrade their precious metals price forecasts sooner and farther than their competitors and this has helped to sour sentiment. Also, record outflows from gold ETFs such as the SPDR Gold Shares (GLD) have added to the selling pressure.

Based on what you might read in the mainstream financial media these days, you may as well stick a fork in the secular gold bull market because it's all but done (and maybe silver too), but there's a very good argument to be made for why that is not so.

In short, now that the latest round of Fed money printing is causing the monetary base to grow, higher inflation is likely to follow. Then, perhaps suddenly, investors and traders will flock back to precious metals.

Allow me to explain.

There are many reasons why gold and silver prices rise and fall and the rate of inflation is surely one of the more important ones.

When investors and traders see inflation rising, they tend to pay more for precious metals because, understandably, they think that consumer prices might continue to rise sharply. Conversely, when we have disinflation (falling inflation rates), there is less demand for an inflation "hedge".

The absolute rate of inflation is important, but the direction is also important, if not more so.

As shown below, the period since the end of the Great Recession can be divided into four distinct alternating periods of rising inflation/rising gold prices and disinflation/steady or falling gold prices. 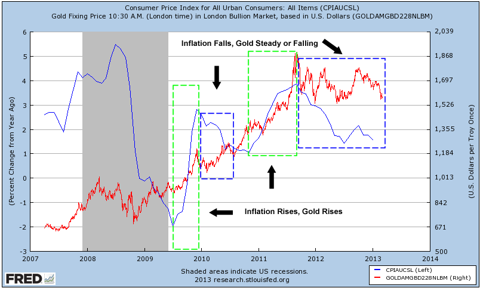 There is a stretch of three or four months in late-2010 when inflation edged lower while the gold price rose sharply, but this was likely caused by one of the other gold price drivers. A quick check of the trade-weighted dollar in late 2010 reveals that it was plummeting at the time, so that likely played a key role.

Clearly, there is a solid relationship between the direction of inflation and the gold price.

Fast forward to today and we find that few investors seem to have any concern about rising inflation and for good reason - short memories. As shown above, since peaking at a rate of almost four percent in late-2011, year-over-year inflation has been falling for most of the last 18 months.

It's no coincidence that the gold price has also fallen during that time.

But, is inflation likely to stay low?

Not with the money supply rising as it is now.

Inflation is always and everywhere a monetary phenomenon in the sense that it is and can be produced only by a more rapid increase in the quantity of money than in output.

We may be about to get another reminder of that...

This has only recently started to cause the money supply to grow and, importantly, this is the first time that the central bank has conducted outright money printing since 2011.

The "Operation Twist" maturity swap program that was launched in late 2011 and extended through all of 2012 did not add to the monetary base, and this played an important role in the disinflation that we saw last year.

But, as shown below, now the money supply is rising again and that is likely to continue for at least the rest of the year. 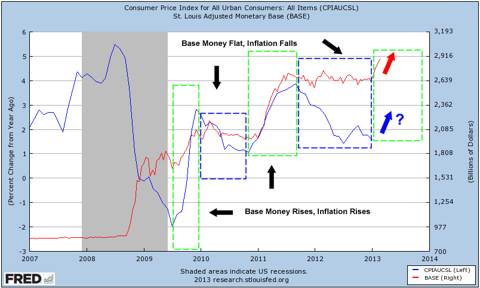 As for the idea that QE3/QE4 may soon come to an end, Fed Chief Ben Bernanke should have disabused anyone of that notion in three appearances last week. The sequestration budget cuts that went into effect a few days ago are also important because it is now more likely the Fed will continue this stimulus even longer since a half percentage point is about to be lopped off of U.S. economic growth and, with it, hundreds of thousands of jobs.

Sure, a few regional bank presidents are concerned about stoking inflation (along with asset bubbles), but the people who run the Fed (Bernanke, et al) are firmly committed to money printing.

We're already seeing signs that disinflation may have come to an end.

As detailed here last month, core inflation (excluding food and energy) in January saw one of its biggest jumps in years and, though overall inflation was flat, this was due in part to a month-to-month decrease in gasoline prices.

In the next inflation report to be released on March 15th, we'll see about a 13 percent jump in gas prices reflected in the data and, if core inflation continues to rise sharply, then there could soon be a decidedly different outlook for consumer prices.

If sharply higher inflation doesn't show up this month, given the relationship between base money and the consumer price index, it's probably only a matter of time.

And once inflation does start to rise, expect the Fed to start talking about it, but not do anything about it.

The last thing the central bank wants to do is squash this long, slow recovery and, as detailed here a few months back, there's enough "wiggle room" in the Fed's new inflation threshold for them to let prices rise a good deal before taking any action to stop it.

Those who have recently sold their gold ETFs and silver ETFs such as the iShares Silver Trust (SLV) may soon regret having listened to investment banks over the last month or so.

[I'd like to give a big thanks to Rich Toscano at Pacific Capital Associates for helping out with the development of this article - I had been poking around at the edges of the money supply-inflation-gold relationship, but Rich helped me get to the conclusion faster than I otherwise would have.]

Disclosure: I am long GLD, SLV. I wrote this article myself, and it expresses my own opinions. I am not receiving compensation for it (other than from Seeking Alpha). I have no business relationship with any company whose stock is mentioned in this article.

Tim Iacono
51.82K Followers
Tim Iacono is the founder of the investment website 'Iacono Research', a subscription service providing market commentary and investment advisory services specializing in natural resources. He also writes a financial blog known as 'The Mess That Greenspan Made', a sometimes irreverent look at the many and varied after-effects of the Greenspan term at the Federal Reserve. Use the links below to visit Tim's website/blog.
Follow
45 Comments
To ensure this doesn’t happen in the future, please enable Javascript and cookies in your browser.
Is this happening to you frequently? Please report it on our feedback forum.
If you have an ad-blocker enabled you may be blocked from proceeding. Please disable your ad-blocker and refresh.