Given the importance of the numerical milestone reached yesterday in the psyche of some investors, a look at the Dow Jones Industrial Average (NYSEARCA:DIA) today versus the Dow when it was last at its previous peak on October 9th, 2007 is warranted. The Dow got its start in 1896 as a means for synthesizing the movements of industrial stocks into a single number. While its adjusted price-weighting and narrow coverage universe are now archaic in the days of computerized calculations and alternative weightings, the DJIA has retained its status as a stock market bellwether. Comparing the valuation of the constituents today versus the valuation when the index was last at this level can shed light onto general market valuation.

Before we can aptly compare the index at today's level versus its previous October 2007 peak, we must understand how the constituents have evolved over this period. With only thirty constituents, additions and deletions of constituents and their change in weighting can have a big impact on this stock market gauge. Over the past five years, there have been five new constituents added to replace deletions as seen below. 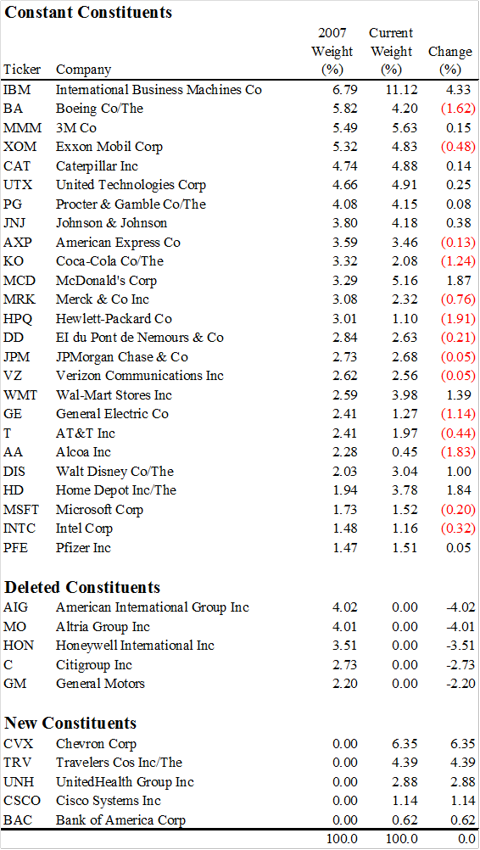 Constituents that comprised 15% of the index at its 2007 peak have been removed. AIG was removed from the index in September 2008 in the wake of its government bailout. Altria's spin-off of Kraft (KRFT, MDLZ) and Phillip Morris International (PM) narrowed the company's focus to largely domestic tobacco, and made the company less of the global leader preferred by the index. Honeywell (HON) was the smallest of the industrials upon its departure, and its exclusion in part marked the shift towards a services-driven economy. With Citigroup's shares down ninety percent after its own taxpayer financed bailout, the company exited the index in June 2009. General Motors left via bankruptcy.

The new constituents represent 15% of the current index, with Chevron (CVX) now the second-largest component. Despite Bank of America's (BAC) impressive 109% return in 2012, the company is still only a quarter the weight of Citigroup at the index's previous peak.

For the twenty-five constituents that remained in the index, fourteen have higher market capitalizations today than at the peak. Home Depot (HD) has had the biggest percentage increase in value while Alcoa (AA) barely edged Hewlett-Packard (HPQ) as the worst performer, shedding three-quarters of its market cap. Home Depot, the two aforementioned laggards, and Pfizer (PFE) and Verizon (VZ) are the only five stocks that are trading at a higher multiple of trailing twelve month earnings today versus at the peak in 2007. 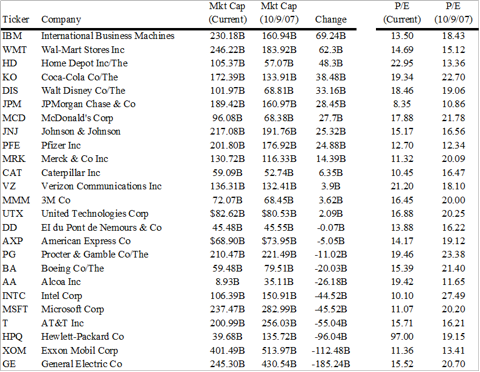 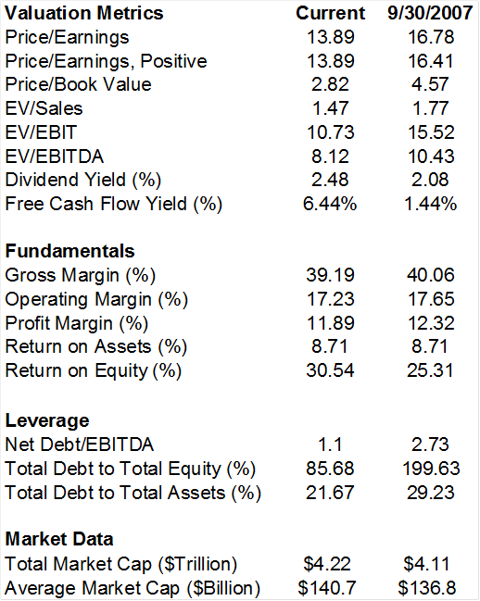 While one-year earnings multiples are an imperfect gauge, putting the current relative valuation in a historical context, one can see that the index is still trading over two turns lower than its trailing twenty-year average.

Market bears will be quick to point out that the discount is justifiable due to the market uncertainty (anemic economic growth, questions surrounding the fiscal sustainability of our structural federal deficits, the smoldering European sovereign debt crisis, the impact of the ultimate unwind of accommodative monetary policy, and a litany of lesser albeit impactful variables).

I like to think of earnings multiples in their reciprocal forms. A 13.9x P/E ratio is a 7.2% earnings yield, which is quite attractive relative to the 1.9% rate on the 10-yr U.S. Treasury. This 530bp risk premium, compensation for market uncertainty, looks far more attractive than the 129bp spread of the October 2007 earnings yield of 5.96% relative to the then 4.67% ten-year Treasury. While uncertainty remains, this risk premium remains historically high, protecting valuations to some degree.

These market milestones are just a marker on a long investment road. However, it is prudent to occasionally stop and look around and gauge relative valuation. While the Dow Jones Industrial Average has its foibles that make it a narrow view on the broader market, it is hard for me to not see further gains on the (sometimes bumpy) road ahead. The small sample size that is the Dow is a microcosm of a corporate landscape that has repaired its balance sheet post-crisis, strengthened operations, and positioned to improve private sector economic growth. Five years past the market trough, we are likely to see continued mergers and acquisitions that spur market advances, and retail dollars that have been out of the market return to further boost valuations.

I expect that the Dow still has roughly twenty percent gains ahead before a cycle peak in mid-2015. Please put your own forecast and a brief rationale in the comments section below.

Ploutos
21.15K Followers
Institutional investment manager authoring on a variety of topics that pique my interest, and could further discourse in this online community. I hold an MBA from the University of Chicago, and have earned the CFA designation. My articles may contain statements and projections that are forward-looking in nature, and therefore inherently subject to numerous risks, uncertainties and assumptions. While my articles focus on generating long-term risk-adjusted returns, investment decisions necessarily involve the risk of loss of principal. Individual investor circumstances vary significantly, and information gleaned from my articles should be applied to your own unique investment situation, objectives, risk tolerance, and investment horizon.