One of the most common questions that folks who are becoming newly acquainted with terms like ‘fiat money’ and ‘fractional reserve banking’ are asking is “How did we get here?” For sure, the recent publicity of 21st Century Tea Parties along with the occurrence of the worst financial crisis in recorded history has people asking questions. In terms of the American obsession with central banking and fiat currency, 1913 is generally identified as the point where the country went wrong. In truth, however, our obsession with funny money has transcended all; including even, the birth of the nation. And on a global scale, the eternal ponzi scheme of fractional reserve banking has been going on for a few thousand years now. It is a scheme that has been so perfectly atrocious over the centuries that it makes ponzicons Stanford and Madoff look like petty thieves. In this week’s piece we’ll take a look at some of the more noteworthy landmarks in America’s great experiment with paper money.

Gresham’s Law deals with a situation when there are two (or more) competing currencies and one is ‘pegged’ against the other. More specifically, the law deals with bimetallic currency systems where both Gold and Silver are used in an economy and the ratio of the two is fixed. A good historical reference would be the post Bank of North America United States in the early 1800s. The US Constitution in Article 1, Section 8 gave Congress the power to coin money and determine the value thereof. A Constitutional Dollar was determined to be a coin containing 371.25 grains of pure silver. In order to encourage the use of gold as well as Silver, the ratio was set at 15:1 – therefore a Constitutional Dollar could also be a Gold coin containing 24.75 grains of pure Gold. For anyone who knows Gold, 24.75 grains is not a very large coin so coins that contained 247.5 grains of Gold were used and were valued at 10 Dollars. So far, so good, right?

The only problem here is that the exchange ratio of any two goods will vary over time. When the 15:1 value was set, that was the going market rate. Alexander Hamilton, who was a big proponent of the bimetallic system, gets an “A” for effort, but failed to recognize and/or provide for the constant fluctuation. In the case of the Gold-Silver ratio, the supply of Silver grew disproportionately to that of Gold due in large part to mining in the Caribbean. The silver made it to our shores thanks to a vibrant trading relationship between America and that region of the world.

This is where Gresham’s Law comes into play. The law states that any time one money is compulsorily undervalued while another is overvalued, the undervalued money will be driven out of the economy or hoarded while the overvalued money will explode into circulation. In following Gresham’s Law, Gold all but disappeared from circulation in early 19th century America. With the obvious consequences of Gresham’s Law, it is easy to ask why any government would forcibly attempt to impose a bimetallic standard on an economy? Hint: It must be remembered that in absence of paper money, the supply of money in the economy was determined by the quantity of specie (Gold and/or Silver).

The monetary ‘authorities’ at the time were attempting to make sure that the economy had enough money to function properly, which was certainly a good intention. Where they went wrong in their approach is that the economy could have easily functioned on silver alone since it was in good supply. Market prices for other goods would have adjusted themselves through the laws of marginal utility and supply/demand according to the supply of both specie and the other goods. Gresham’s Law is easily observed today in our own currency system with a slight variation. While the Dollar and Gold are allowed to adjust to a certain extent in terms of each other, it is easy to see how the undervalued money (Gold) has gone into hiding while the overvalued ‘money’ (Federal Reserve Notes) have flooded into circulation.

Perhaps ironically, America’s first attempts at fiat money began before Lexington and Concord. Before the French and Indian War. And even before the 18th century had seen the light of day. The first government issue of paper money came in 1690 in the colony of Massachusetts. It had become a custom there to embark on plundering missions into Quebec and then use the proceeds of the missions to pay off the soldiers upon return to the colony. In 1690, however, one such mission was unsuccessful so there were no spoils to distribute. In order to placate the soldiers, the colonial government attempted to borrow the required money from local merchants. However, these merchants had a rather dim view of the creditworthiness of the government and refused. In an ill-fated decision, the government of the Massachusetts colony then decided to issue paper notes with the promise of both redeemability and that the issuance was a one-time affair. They ended up being wrong on both counts.

These endeavors continued almost constantly up to and through the American Revolution with two predictable results: the notes issued always depreciated versus the competing specie money and the amount of paper notes issued got larger with each subsequent attempt. These comparisons are important to make when connecting early monetary ventures to what is going on today.

Early in the American Revolution, the Continental Congress ran into the serious issue of funding and opted to look towards fiat money for the solution to the problem. Unlike some of the previous redeemable fiat ventures, the ‘Continental’ as it became known was not to be redeemable at all, but would rather be dismantled after the war ended by using taxes paid by the colonies. While this was a temporary solution, it carried the double whammy of inflation and taxation for the colonies. Certainly, sacrifices had to be made, but what is most interesting is what happened next. From 1775 through 1779, the supply of Continentals exploded by over 1800%. Predictably, the value of the Continental in specie (silver) had fallen to 42:1 from a beginning value of 1-1.25:1. By 1781, with the war still raging, the value of the Continental had fallen to a negligible 168:1. Comparatively speaking, today’s fiat dollar which traded with specie (gold) before the Great Depression at a rate of 20:1 now trades around 950:1 - a similar hyperinflation although over a much longer period of time.

The next step taken by the colonial government was to impose price controls and attempt to dictate the market value of the failing currency. These efforts flouted several of the laws of economics, the first of which is that you cannot run an effective paper money system without confidence. The second is that price controls create shortages by artificially setting the market price below that of the equilibrium price as is illustrated in the chart below: 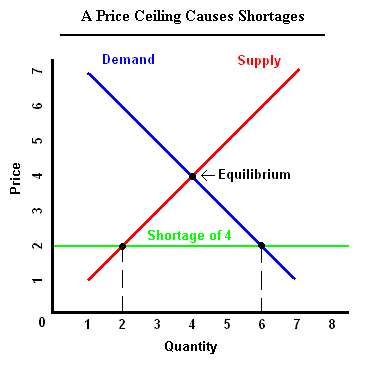 With the impending failure of the Continental in 1779, the Congress resigned itself to allow the Continental to depreciate unredeemed into worthlessness. However, and tragically, the Congress then resorted to issuing loan certificates for the purchase of goods and services from Colonial merchants and refusing to pay anything in else. Soon enough the certificates became used as a currency and, much like their brother the Continental, began to depreciate. Here’s the important part though. Instead of allowing the certificates to be redeemed at a depreciated value, they were carried into perpetuity and the permanent Federal debt was born. This unpaid bill is better known today as the National Debt.

The Bank of North America and Robert Morris

In 1781, Robert Morris introduced a bill that created both the first commercial bank and the first central bank. The resulting catastrophe, headed by Morris himself, opened in 1782 and quickly ran into problems. The first of these problems was our old friend confidence. Americans, already weary of paper notes due to decades of failures, inflation, and broken promises just couldn’t shake the perception that the new bank’s notes were being inflated compared to the still-existing specie. The bank, in an extraordinary move at the time actually went as far as to hire people to promote the new bank and its notes and to insist on redemption for specie. Obviously the idea here was to gain the confidence of the public by demonstrating that the notes were in fact worth something. Paradoxically, today’s Fed doesn’t even try to maintain an illusion of backing or intrinsic worth. 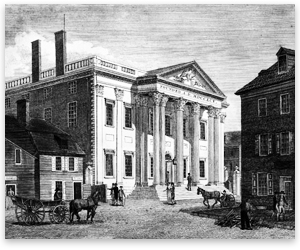 This first experiment into central banking lasted barely a year as in early 1783 Morris moved to end the institution’s authority as a central bank and shifted its focus to commercial activities with a Pennsylvania charter. Although short, it was one of many important steps in the establishment of a central banking authority. Perhaps most importantly, the population grew more accustomed to using paper money. By the 20th century, specie was removed from circulation in totality while the ability to redeem still existed. Eventually, redeemability was suspended as well, leaving us with a paper currency with only implicit worth. In 1971, in a final blow to sound money, settlement of foreign debt in specie was suspended as well. What has transpired since has been a slower, but eerily similar version of the demise of the Continental.

In conclusion, there is absolutely nothing wrong with paper money in and of itself. It can actually serve a valuable purpose in that it is more portable, easily divisible, and in the case of the grain banks thousands of years ago, was much easier than moving bushels of wheat. However, the predilection of those charged with running these types of operations has been to coerce and conspire to rob the people of wealth through stealth. Whereas it would have been exceedingly problematic to confiscate a farmer’s grain without incurring his wrath, it was magnificently simple to inflate his wealth away through the over issuance of grain receipts. The parallels between these early experiments and what goes on today are astounding. We as a people still haven’t gotten our heads around the idea of inflation - the over issuance of fiat paper money - and the confiscation of wealth it represents. What could never be done through direct taxation has been done under another name, right under our very noses, and in plain sight.

“A History of Money and Banking in the United States” Rothbard, Murray N. Mises Institute.

Andy Sutton
490 Followers
Andy Sutton is the Founder & Chief Strategist for Sutton Associates, a Registered Investment Adviser in the Commonwealth of Pennsylvania. For more information about the company, its products and services, or contact information, please visit the company's website (http://www.suttonfinance.net). Andy finished his MBA in 2002 and has been privately assisting individuals in selecting quality financial strategies for the past 3 years. He graduated with Honors in Economics and is a Graduate Member of Omicron Delta Epsilon International Society in Economics. He is one of the few independent advisers to forecast the current inflationary environment as well as the end of the housing bubble and manage money accordingly. He is the author of the weekly economic commentary My Two Cents (http://www.my2centsonline.com/) and holds a FINRA Series 65 License.