Policy-makers not only misunderstand the economic crisis, they continue to underestimate it. Consequently, solutions to date have not only failed to “fix” anything, they have made the problem worse. The problem isn’t falling asset prices, it’s not rising foreclosures, it’s too much debt. With an assist from mark-to-market accounting,* too much debt inflated the asset bubble in the first place. Yves Smith has it exactly right that the only “solution” to this crisis is price discovery, to allow asset prices to fall to whatever level they need to in order for markets to clear. This is bad news for over-levered balance sheets, but there’s nothing else to be done.

And yet American policy-makers appear convinced that more debt can rescue an economy already drowning in it. If we can just keep the leverage party going, all will be well. $787 billion to fund “stimulus,” another $9 trillion committed to guarantee bad debts, 0% interest rates and quantitative easing to drive more lending, new off balance sheet vehicles to hide from the public the toxic assets they’ve absorbed. All of it to be funded with debt, most of it the responsibility of taxpayers.

If I may offer just one reason this will all fail: rising interest rates. Interest rates need only revert to their historical median in order to hammer asset values, and balance sheets, into oblivion. (click on chart to enlarge) 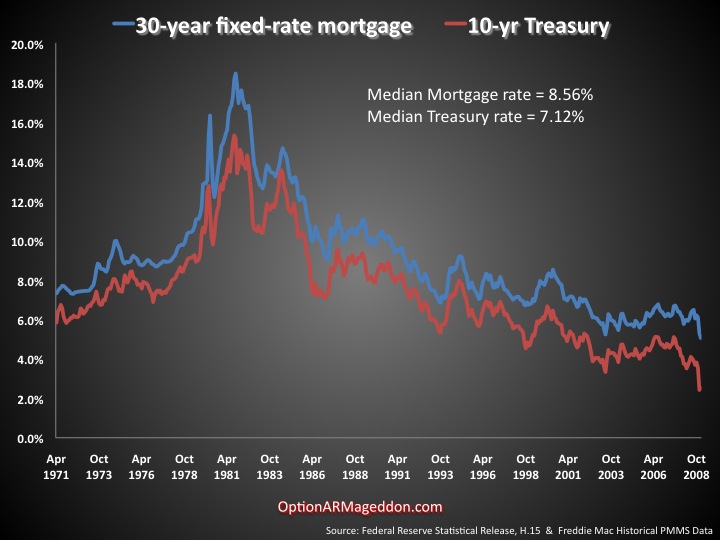 A simple present value calculation suggests that house prices could fall another 30% if mortgage rates get back to 8%.** Enough to wipe out a 20% downpayment made today and still leave the buyer upside down on his mortgage. Given the pile of Treasurys the Obama administration plans to dump on the market, it seems logical to assume interest rates are headed up.

Some might argue that deleveraging is SO violent that a couple years of “stimulus” and other debt-financed rescue measures are needed to cushion the blow. Unfortunately, any positive impact is likely to be offset by upward pressure on interest rates. Perhaps the Fed can monetize a lot more debt. But that will have its own negative consequences.

Picture it if you will: the economy stabilizes, money flows out of Treasurys, which drives interest rates back to normal. Asset values that had appeared to stabilize fall again. More writedowns ensue, more balance sheets turn up insolvent. The debt deflation conflagration ignites again, burning up what’s left of the economy.

If our experience to date has taught us anything it should be that kicking losses up to bigger balance sheets solves nothing. Losses have to be taken. The balance sheets on which they reside will end up insolvent. Why compound our problems by piling up more debt and concentrating all of it on the public’s balance sheet? Is American arrogance so great that we believe our Treasury and our currency will survive the trillions of $ worth of losses and stimulus we’ve already agreed to fund? To borrow Martin Wolf’s wonderfully evocative phrase, we are a python that has swallowed a hippopotamus.

At the end of the day, flushing more debt through the system is the only lever policy-makers know how to pull. Lower interest rates, quantitative easing, deficit spending, it’s all the same. It’s all borrowing against future income. Each time we bump up against recession, we borrow a bit more to keep the economy going. With garden variety recessions, this can work. Everyone wants the good times to continue, so no one demands debts be paid back. Creditors accept more IOUs and economic “growth” continues apace. If it sounds like Bernie Madoff’s Ponzi scheme, that’s because it is.

Each time Bernie’s scam got a few too many investor withdrawals, he’d simply plug the hole by raising more investor cash. The guys at Fairfield Greenwich were making so much in fees, they were happy to funnel more his way. But at a certain point, Ponzis get too big. There simply aren’t enough new investors to pay off older ones. In the aggregate, the same is true for Western economies. Their debt loads are now so huge, they are simply unpayable.

Naturally, policy-makers sound just like Ponzi-schemers: Just give us a little more cash to get us through this rough patch and everything will be copacetic. Ben Bernkanke at the National Press Club alluded to the famous quote by St. Augustine: “Oh Lord, give me chastity, but do not give it yet.” President Obama convened his “fiscal responsibility” summit days after passing the stimulus bill and days before proposing huge increases in health care spending.

So the question becomes, can we keep our Ponzi going? Or has it grown too large? Have we reached the moment when, like the Depression, there’s just no escaping the great unwind? 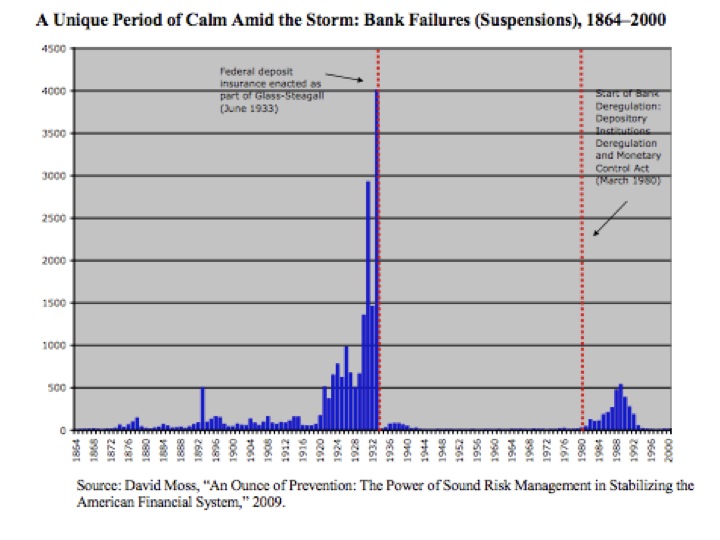 There has been much protest from economists that whatever economic funk we find ourselves in presently, it’s not as severe as the Depression. One data point suggesting otherwise is Household Debt vs. GDP. A favorite example of mine, though, was the chart above featured in the Congressional Oversight Panel’s January report. (Click to enlarge)

The chart downplays our current crisis by comparing the number of failed banks during the Depression with the number today. But the number of bank failures misses the point. The banking system is far more concentrated today. What makes our current banking crisis totally unprecedented is the size of bank failures relative to the overall economy. A better way to compare the two crises is to look at deposits in failed banks relative to GDP. (click to enlarge) 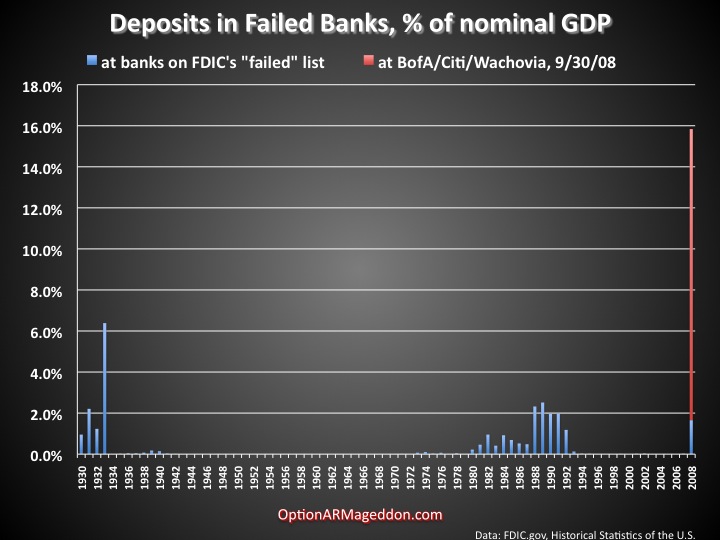 Last year WaMu was the only ultra-large bank that officially “failed” according to FDIC. But in the absence of government intervention, it’s likely the entire U.S. banking system would have gone under. Certainly the “failed” list would now include Citi, BofA and Wachovia.

Adding these three banks to the list still understates the scale of the crisis. Can anyone seriously argue that Chase (JPM) and Wells (WFC) would have survived the year in the absence of taxpayer largess?

Also FDIC’s Deposit Insurance Fund. The $19 billion it has in reserve is but a drop in the bucket compared to the $5 trillion worth of deposits and bank debt it now “guarantees.” Naturally, the Fund needs replenishing.

Public and private pension systems are drastically underfunded. California is on the verge of bankruptcy. The unfunded liabilities for Medicare and Social Security are north of $50 trillion.

The great Ponzi scheme that is the Western World’s economy has grown so big there’s simply no “fixing” it. Flushing more debt through the system would be like giving Madoff a few billion to tide him over. Or like adding another floor to the Tower of Babel. To what end? The collapse is already here. The question is: How much do we want it to hurt?

Using the public’s purse to finance “confidence” in a system that is already kaput may delay the Day of Reckoning, sure, but at the cost of multiplying our losses. Perhaps fantastically.

Bottom line….We can bankrupt ourselves propping up a system that is collapsing anyway, or we can dig ourselves out of debt, if not with higher interest rates then certainly with fiscal austerity. That would be a hard sell to the American people, I know. But deep down, Summers and Geithner know it is the right thing to do. It is, after all, the prescription they wrote for emerging markets facing financial crises.

It’s long past time we took our own medicine. If we don’t take it voluntarily, the bond market will stuff it down our throat anyway.

*As asset values increased, so did the value of collateral to support new lending. More lending inflated asset prices, increasing the value of collateral yet again, encouraging still more lending. Since house prices never fall, everyone imagined this cycle could continue ad infinitum. And even if they didn’t, no one was going to get in the way. Too much money was being made. I wonder: did any of the current critics of MTM’s pro-cyclicality complain on the way up?

**Imagine mortgage rates jump from 5% to 8% tomorrow, with no corresponding increase in buyers’ incomes. A representative consumer has $3,000 to spend on housing today and tomorrow. Increasing interest rates 300 bps drastically reduces the principal value of the loan he can support with that monthly payment. (Admittedly, this is a simplistic way of looking at house prices. But it serves to demonstrate asset price sensitivity to interest rates.)

Now increase the interest rate to 8% while holding other variables constant.

***Caveat: to the extent government intervention allowed insolvent financials to survive the S&L crisis, they wouldn’t be included in this list.

Deep Value Guy
376 Followers
Rolfe Winkler is a columnist and blogger for Reuters. His website is http://blogs.reuters.com/rolfe-winkler. Prior to Reuters he blogged for the Implode-o-Meter at OptionARMageddon.com and his content was syndicated on RGE Monitor and Naked Capitalism.