During the previous week, the euro traded almost in range, finishing a bit higher (0.6%) than its initial value ($1.2986) from Monday. The EUR/USD exchange rate started the current week significantly lower, opening with a gap of more than 170 pips below its Friday closing value. As of the time of this writing, the euro covered a lot of the gap and trades around the $1.2960/70 area. The reason for this sharp decline is considered to be the Cyprus rescue deal from last week, the positive vote on which faces local opposition inside the country.

Apart from the Cyprus vote on the deposits levy on Monday, the current week is relatively calm regarding the economic events.

The most important risk events of the week are the Germany PPI, FED's monetary policy press conference, and FOMC economic projections, all of them on Wednesday. Those have the potential to determine the near- to long-term direction of the EUR/USD exchange rate.

As mentioned in a previous edition of our EUR/USD Weak Ahead review, "a decline to the $1.29 area where the 200SMA lies" was possible. On Monday this possibility materialized, although not in a very common way. The 200SMA might provide some support here and the euro has the potential to rise from its current levels. However, as our Consensus Optimism Index below shows, the analysts are overly bullish regarding the economic indicators. This presents an elevated probability that negative surprises would affect the euro's value.

This week's analysts' expectations are significantly optimistic, with more than 85% of the expectations being for better-than-previous values. Consensuses are more optimistic for the U.S. data (90%) than for the European one (82%). The weekly increase in optimism is significantly bigger for the European data (98%). This generally would favor the euro against the U.S. dollar.

The current value of our Consensus Optimism Index (COI) is 85, up from 56 for the previous week. 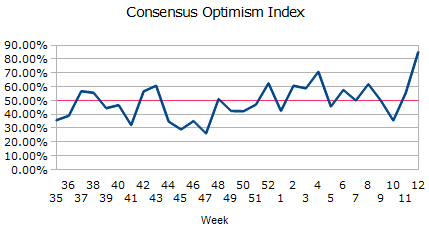 The index shows the proportion the positive consensus estimates take in all the estimates we have available for the respective week. A value above 50% represents an optimistic mood in the expectations rather than pessimistic. The weekly change in indexes' values could be used as a tool to assess the analysts' mood. It should not be neglected however that the EUR/USD rate actually moves rather on the real data and on how that data differs from the expected one.

Investors could take advantage of their own expectations about the EUR/USD exchange rate movement in order to hedge the positions they have in other assets. For instance, American investors with investments in euro denominated assets who expect that the U.S. dollar would appreciate against the single currency, could try to decrease the currency risk by selling euros or by opening a short position in an ETF which tracks the price of the euro. CurrencyShares Euro Trust (FXE) is among the most widespread options here. It tracks only the price of the euro measured in U.S. dollars. This ETF has an expense ratio of 0.40%.

For those who prefer more diversified funds, among the options are the PowerShares DB USD Bullish ETF (UUP) and the PowerShares DB USD Bearish ETF (UDN). Both funds are U.S. dollar denominated and track the value of the USD against six other major currencies - euro, Japanese yen, British pound, Canadian dollar, Swedish krona and Swiss franc. The funds' expense ratio is 0.50%.

Monday presents small amount of economic data but the Cyprus vote on the deposits levy seems to be the risk event of the day. It already caused the EUR/USD exchange rate to open with a gap of more than 170 pips. Futures of other risk-on assets, like S&P500, DJIA, also opened significantly lower. As Joachim Fels, Chief Economist at Morgan Stanley in London, points out, cited by Bloomberg, the levy is:

"... a worrying precedent with potentially systemic consequences if depositors in other periphery countries fear a similar treatment in the future."

A positive surprise here might be a affirmative vote on the levy which potentially could lead to euro appreciation in short term. However, it could pose some long term problems in front of the confidence the investors have in the European way of dealing with the economic crisis.

If the EU trade balance presents a higher-than-expected value this would generally support the euro.

Market consensus for all the examined economic data in Tuesday is that there will be better-than-previous values. This presents an increased opportunity for negative surprises which to weigh on the euro's price.

Germany PPI data on Wednesday would hint whether investors could expect elevated inflation in the eurozone. Such expectations, if they occur, could affect the ECB's decision on its main refinancing rate. Currently, the market expects a decline in Germany PPI which technically would be euro negative.

The risk events of the day are the FED's press conference and the FOMC economic projections. Those could drive currencies, as well as equity markets, in either direction. A more hawkish policy would have negative effect on the growth expectations in the U.S. and weigh on both equities and the euro.

The analysts' consensuses for all the examined Markit indexes for Thursday are that they will mark increases. This potentially opens the door for negative surprises which, if happen, would put pressure on the euro.

The value of the leading indicator is important because it shows the future trends in the U.S. economic development. A negative surprise here or in the Philadelphia FED manufacturing survey's value would have significant effect on the risk-on environment. Thus, it would weigh on the euro.

Friday offers small amount of economic data. The expectations for both indicators are positive. Hence, the potential for negative surprises affecting the euro's value is increased.

Disclosure: I have no positions in any stocks mentioned, and no plans to initiate any positions within the next 72 hours. I wrote this article myself, and it expresses my own opinions. I am not receiving compensation for it (other than from Seeking Alpha). I have no business relationship with any company whose stock is mentioned in this article. I might engage in hedging by a long euro position.

Vision Capital M.
131 Followers
With more than 17 years of interest and experience in financial markets, I dare to say I have learned that the obvious is not always true and the multitude is often wrong. Still the markets always tend to provide hints and directions. Learning to listen, see and act happens to be the hardest part. Success in Stock and Forex markets requires labor and learning. The rewards could be great as well as failures. And they are almost always a single man (or entity) game. I'm open for business in the investments and finance field so if you have an offer, please contact me. ===N.B.=== Disclaimer: Each of my articles is considered to be a Research Material and reflects my personal opinions as at the date of writing. As a Research Material the article is an expression of an analytical and educational point of view towards the economy on the macro and micro level, stock exchanges, trading strategies, FOREX market, currency levels, stocks or any other investment or financial instruments I am examining or writing about, it is not and should not be used as an offer or solicitation to buy, sell or in any other way trade securities, commodities, currencies or any other financial instrument, it is not a personalized investment advice, and constitutes no contract between me and the readers or publishers of the Research Material. Moreover, any past results are not indicative of future results. Investors and readers are encouraged to seek professional advice on their investment intentions and their particular situation. The author of each article ("Research Material") is not responsible and accepts no liability to any party for any actions or lack of actions and any results, including any form of loss, arising in any way from acting upon the Research Material. All parties reading this accept that they act or do not act by their own will and they will not hold the author of the Research Material liable for any of their results. End of Disclaimer /===N.B.===