As anticipated, the decline in Haynesville Shale natural gas volumes is now clearly visible in EIA 914 production data. The graph below shows EIA gross natural gas withdrawals data for Louisiana, which are largely driven by production from the Haynesville. Based on Zeits Energy Analytics' model, the data would be consistent with a ~13%-15% decline in the Haynesville production during the second half of 2012 (the earlier drop in production in January and February 2012 is mostly attributable to voluntary production curtailments). The pace of decline for the field as a whole appears less steep than reported by some operators for their individual portfolios. Specifically, Chesapeake Energy (CHK) commented during the most recent earnings conference call that Haynesville volumes were down to ~1.3 Bcf/d from ~2.0 Bcf/d at the peak a year earlier. QEP Resources (QEP) has also indicated that production volumes are declining at a rate of approximately 10% quarter-on-quarter since the company suspended their drilling activity in the field. 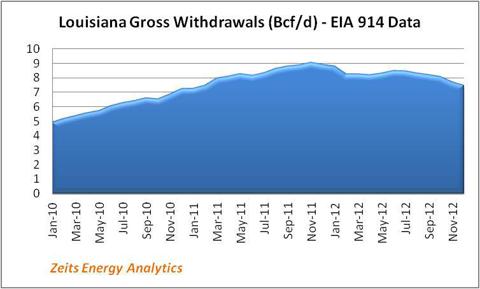 The production decline does not come as a surprise given that the rig count in the Louisiana part of the play has been exceptionally low. With just 18 rigs currently active in the core of the play, drilling activity still remains far from sufficient to maintain production flat, even in combination with wells being placed in line from the backlog. (The map below indicates current rig locations in the play's "core" in Northwest Louisiana.) 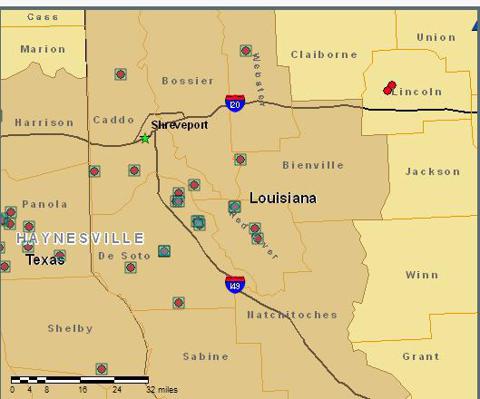 Among operators currently active in the Louisiana "core" of the play are BHP Billiton (BHP), EXCO Resources (XCO), Encana (ECA), J-W Operating (private), Chesapeake, and Royal Dutch Shell (RDS.A). In addition, Exxon Mobil (XOM) is running three rigs in the southern part of the play in the Shelby Trough area.

It is important to remember that the impact from drilling programs being re-initiated by operators in the Haynesville may not be seen for quite some time. In the core of the play, drilling is typically being done off pads, with as many as three-six wells drilled before the completion operation begins. With a typical Haynesville well taking 30-35 days to drill, spud-to-spud, it may take as long as eight months for peak production to be achieved from a six-well pad, from the time the drilling rig arrives on site (this includes time to drill, complete, connect to the gathering line and "clean-up" the wells). As a result, the Haynesville's production may continue on its downward decline trajectory for some time, before the inflection point is achieved.

The pace of decline is likely to become somewhat shallower as an increasingly larger portion of producing wells gets past the steepest initial section of the decline curve (decline rates are particularly high during the first few years). Assuming additional rigs are put to work in the next few months, production level is likely to stabilize towards the end of the year and may possibly grow again. 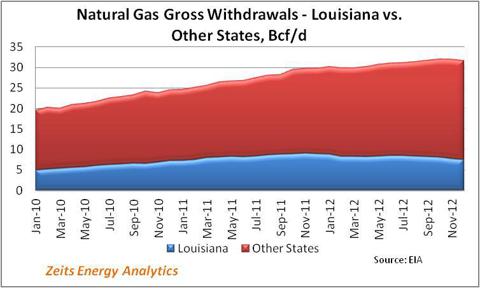 The past several weeks have shown very healthy natural gas inventory drawdowns (in part attributable to colder-than-normal weather). While it is perhaps still early to conclude that the balance between supply and demand has been fully restored, the direction of natural gas weekly statistics has been very constructive for the natural gas price, and the decline trend in several key natural gas supply areas supports the thesis of structural normalization in natural gas fundamentals (at least in the short-to-medium terms).

The recent strength in natural gas futures provides operators with the ability to hedge at profitable levels; additional rigs may be sent back to work already in the near future. The rig count dynamics in dry gas shales will be critical to the direction of natural gas supply during the second half of 2013 as dry gas shales dwarf combo and oil plays in terms of natural gas volume yield on drilling capital. Places to watch are the Haynesville, Fayetteville, Cana Woodford, Pinedale, Arkoma Woodford and other dry gas areas.

Disclaimer: This article is not an investment recommendation. Any analysis presented in this article is illustrative in nature, is based on an incomplete set of information and has limitations to its accuracy, and is not meant to be relied upon for investment decisions. Please consult a qualified investment advisor. The information upon which this material is based was obtained from sources believed to be reliable, but has not been independently verified. Therefore, the author cannot guarantee its accuracy. Any opinions or estimates constitute the author's best judgment as of the date of publication, and are subject to change without notice.