This article is an update to the "U.S. Oil & Gas Royalty Trust - Bargains Available for Disciplined Portfolios" article published on 3/12/2013. The information contains a more in-depth review of SandRidge Mississippian Trust I (SDT) based on material information released by the Trust in the annual 10-K published on 3/15/2013. The information contained confirms analysis in the original article expecting revisions, and provides clearer detail of the impact of decline in well performance and reserve mix on the current Trust value.

The table below provides a comprehensive summary of the PV-10 of the SandRidge Mississippian Trust I published in the Trust 10-K on 3/15/2013. The present value of proved reserves held by the Trust showed a dramatic decline during the year, with the current PV-10 calculated at $8.37 per unit. The report below looks at the changes in the PV-10 from the IPO point of the Trust (April 7th, 2011) until December 31, 2012, about 20 months of performance. During that time period, the PV-10 has shown a decrease of (46%). 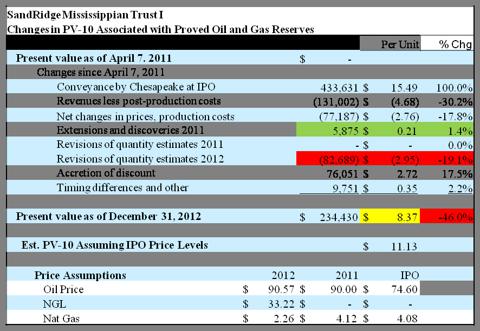 The large decline in PV-10 deserves close analysis. Many are attributing the PV-10 drop to weak natural gas prices during the period. But as the table shows, price declines and production cost changes only account for 17.8% of the drop. Volatile declines in natural gas prices have been the norm over recent years, so in looking for value, discounting what is considered a very low level for natural gas prices in 2012 seems reasonable. Assuming prices trend back to $4 gas, the PV-10 would be in the $11 range.

The more significant impact on the PV-10, however, is in two areas:

From a proven reserve standpoint, SDT showed a major downward revision that looks permanent going forward of (3,465) MBOE. The magnitude of the permanent value reduction is estimated at (19%) of the going forward underlying value of the Trust. 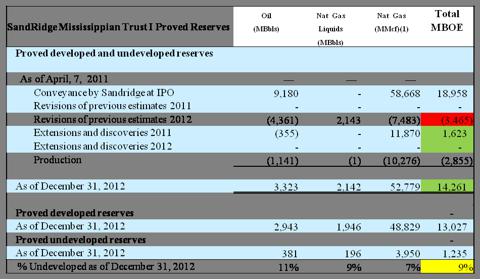 The decrease in reserves is due to pricing and well performance observed during 2012 as additional information was obtained through the continued horizontal development of and production from the Mississippian formation.

Reserve Impairment Due to Production Mix

The reserve report also shows a major shift in production mix going forward. In the future, SDT will be much more levered to the natural gas price curve. The table below summarizes the shift in reserve mix:

The new mix is 24% oil, 15% NGL and 62% Gas. The projected mix at IPO was 48% Oil / 52% Gas. Given the price differential in the market between natural gas on an equivalent basis to a barrel of oil, the reduction in long-term stable oil reserves is detrimental. The table above summarizes how the shift in mix has reduced the current price level realized by the Trust by 29%. A stronger natural gas pricing market will benefit the Trust, but a permanent value gap is likely to remain.

Drilling Progress - What is the Risk of Further Impairments?

It is expected that the drilling knowledge that SandRidge now has about the Mississippian Play is reaching a point that the reserve estimates will be more accurate relative to future year results. Usually management tries to get all the bad news out at once. The primary remaining risk is how new wells brought on-line will perform. In terms of drilling, the amount of proved, but undeveloped reserves at SDT is now 7%. So the drilling risk is significantly reduced from a year ago. The total number of wells remaining to be drilled is 16 (13% of wells obligated to be drilled by SandRidge), and these wells are on schedule to be completed in 2013.

Assessment of Value - Neutral to Slightly Expensive at Current Price

SDT's PV-10 value per unit is $8.37, fully 42% below the unit price close of $14.36 on 3/15/2013. While the share price is a significant premium to the PV-10, the premium is partially explained by the $2.26 realized average price of natural gas used in the calculation. A PV-10 adjusted of $11 seems more reasonable if you believe the fair market value of natural gas is $4, and oil is $90. If you believe this price structure for oil & gas is fair, buying the level of proven reserves at SDT for $11 per unit would be a relative bargain as it implies a 10% rate of return to the termination of the Trust.

The question is should there be a premium above $11 for SDT, and if so how much?

To estimate the relative impairment to the expected distribution stream going forward, I have used the PV-10 data to derive a view of the permanent impairment level to the distribution. This figure is -17.7%, and shown in the table below. 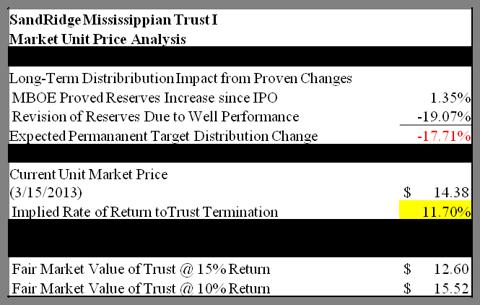 At the current price of the Trust of $14.38, and adjusting the future stream of Trust distributions by (17.7%) starting with the next distribution, the implied rate of return of a Trust unit held to Termination is 11.7%.

In my opinion, until a better track record is established over the next several quarters, buyers in the market should expect a 10%-15% return for entering an investment of this nature. Based on this view, the current unit traded price is considered neutral to slightly expensive for the current risk of SDT.

One oddity about the current market unit pricing is that SDT has a lower PV-10 per share ($8.37) than its sister Trust SDR ($9.80), but a substantially higher per unit market price of $14.38 versus $12.50. This anomaly seems a little irrational given the extreme similarity in the properties and the relative levels of proven reserves on the books.

Daniel R Moore
3.69K Followers
Daniel Moore is the creator of FinancialRelativity.com, a web portal created for the purpose of tracking the status of financial markets and providing investment analysis and portfolio management insights to investors. Based on the systematic investment research, he writes about the market and publishes his views through internet market publications. He has over 25 years of management experience in corporate finance in a variety of high technology start-ups and public companies. A graduate of Duke University’s Fuqua School of Business in 1988, he has spent the last 10 years managing investment portfolios seeking high risk reward returns for fixed income investors.