United Technologies Corporation (NYSE:UTX) and Siemens AG (SI) are two industrial companies with steady revenue growth, strong cash flow, and lower-than-industry average P/Es and Forward P/Es. Both stocks had received positive upgrades from analysts recently and will be analyzed fundamentally and technically in this article. Investing strategies will also be presented.

UTX has a strong buyback plan of $5.4B, where the company will repurchase as many as 60 million shares for a total of about $1 billion for 2013, which is in-line with the previous projection. UTX is set to benefit from the improving economics in China and UTX expects Asian sales to increase about 7-8 percent in the next decade as construction of skyscrapers in China boosts demand for elevators and air conditioners.

On March 18, 2013, UTX announced it has completed the sale of the former Goodrich Corporation pump and engine control systems business to Triumph Group, Inc. (TGI). The sale was one of the divestitures required by regulatory authorities as a condition of UTX's acquisition of Goodrich Corporation.

Fundamentally, there are a few positive factors for UTX: 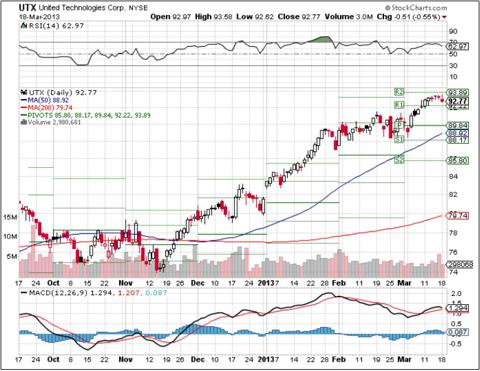 UTX will continue to benefit with improving global economy. UTX remains a good long-term holding for cash flow investors. However, with the recent run-up and weakening short-term technical trends, bullish investors might want to setup the long-term position after pull back. A safer entry point will be $88/$88.50. Investors can also review the following ETFs to gain exposure to UTX:

Siemens will continue to benefit from the increasing investment into LTE networks globally, including China Mobile's huge CapEx into TD-LTE network, through Nokia Siemens Networks, a joint venture between Nokia (NOK) of Finland, 50.1% control, and Siemens (SI) of Germany, 49.9% interest.

In early February, Siemens had converted telecommunication and multimedia business into legally separate unit. This will allow the company to respond faster and adapt more effectively with a more favorable cost position.

Fundamentally, there are a few positive factors for SI: 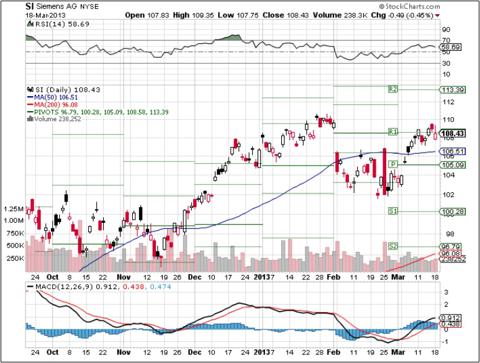 Similar to UTX, SI is a great long-term investment holding for cash flow investors with its strong cash flow generation ability. There should be more upside potential in the long term with 62.70% long term annual growth estimate for the next 5 years. For bullish investors, a credit put option spread of July 20, 2013 $95/$100 put can be reviewed, which will allow investors to gain some upside credit premium or enable investors to acquire SI shares at a price below $100 upon option expiration.

Note: All prices are quoted from the closing of March 18, 2013. Investors and traders are recommended to do their own due diligence and research before making any trading/investing decisions.

Disclosure: I have no positions in any stocks mentioned, but may initiate a long position in UTX over the next 72 hours. I wrote this article myself, and it expresses my own opinions. I am not receiving compensation for it (other than from Seeking Alpha). I have no business relationship with any company whose stock is mentioned in this article.