One of the more pervasive pieces of conventional wisdom is that senior classes in non-agency RMBS (read AAA) are safe and sound even in a default due to their first money nature that isolates them from the potential loss problems of the lower tranched classes. An interesting tidbit that has arisen as a result of a close read into the HR 1006 Bill "Helping families save their homes act" indicates that many deals' legal documents have a "bankruptcy carve-out". In these instances, bankruptcy-related losses above a de-minimis amount become allocated on a pro-rata basis across the capital structure, regardless of subordination. The obvious impact is that AAA tranches which previously had seen themselves as immune to any losses, would suffer impairments.

This event is particularly an issue in the context of the proposed bankruptcy cramdowns by HR 1006. Additionally, the recent negative actions taking by many rating agencies could be predicated upon this particular often ignored feature, as rating downgrade could become much more prevalent not only for the junior classes, but for the AAA tranche as well.

The table below presents a summary of vintages and shelves that possess this carve-out, which at a casual glance predominate the older vintage deals, which are considered relatively more insulated from overly aggressive underwriting and are estimated to have lower loss provisions. 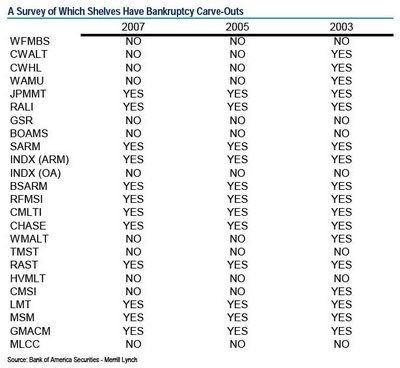 So what are the potential loss implications? At the surface: likely not much in terms of absolute losses. Bank of America estimates that the total amount of affected securities would be at just under $500 billion, based on the above assumption that 2/3rds of Jumbo and Alt-A are "shifting interest" and further estimates a 50% for affected securitizations (as not all shelves are impacted as the table above denotes). 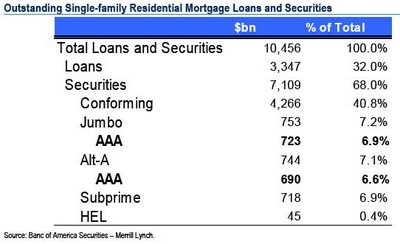 And based on Moody's dated estimates for losses, which peak at 1.3%, suggests total losses of around roughly $7 billion, potentially rising to $10 billion in an aggressive scenario.One corollary of the problem is the impact on CMO/CDO structures that are heavily levered against the AAA tranche, and for whom even a 1% impairment could be magnified up to 20x from leverage on what was considered a previously risk free asset class. However, the CMO/CDO impact is an issue we will consider at a later time, the most direct impact here is as pertains to life insurance companies who are holders of AAA RMBS tranches, as these are likely the ones who will be impacted the most from potential downgrade actions on AAA's. Additionally, the administration's decision yesterday to induct the Ins cos into the TARP hall of fame is likely a harbinger of the expectation for much larger upcoming capital needs, explaining the rush to provide preemptive guarantees for "contingent liabilties." 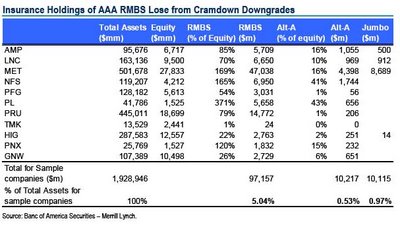 As the downgrades ramp up, it will be very interesting to follow the announcements issued by insurance companies who, presumably alongside structured finance entities, may soon find themselves in a curious predicament where they experience losses due to not having read the fine print.

Tyler Durden
3.31K Followers
Tyler Durden (a pseudonym) represents the idea that a return to truly efficient markets is a possibility and a necessity. After having experienced the inner workings of capitalism at various asset managers and advisors, Tyler believes that the current model is flawed and a deleveraging at every level of modern society is needed to reinspire the fundamental entrepreneurial spirit. Visit his blog: ZeroHedge (http://www.zerohedge.com/)