The Japanese yen has again slipped below JPY100/USD and Japanese export-oriented stocks are responding in kind. However, a return to prior highs (JPY85/USD or weaker) is highly unlikely because

a) Japan will be significantly increasing JGB (government bond) issuance from a total JPY30 trillion to more like JPY43 trillion and exacerbate an already-high debt-to-GDP ratio (approaching 200%) in the process,

b) the return of risk appetite has revived currency carry trades, with near-zero rate USD, Euro and JPY being the funding currencies for trades in emerging economy currencies with high, two-digit interest rates like Brazil (11.25%), Egypt (10.0%), Hungary (9.5%), South Africa (9.5%) and Turkey (10.5%).

On the other hand, the Australian dollar and the New Zealand dollar had been favorite trades for yen-based Japanese individual investors.

Global FX volume grew some 15% in 2008, even amidst the global financial crisis, as company and large financial institutional trading took up the slack from the collapse of FX trading by hedge funds who were scrambling to unwind carry trades. We now have a situation where the US, Europe and Japan are approaching the zero rate horizon (known as ZIRP in Japan) as well as QE (quantitative easing), while emerging countries like Brazil, Hungary, South Africa and Turkey offer rates from over 9% to 11%). With decreased forex volatility, these trades can continue to generate stable returns.

According to Bloomberg carry trades using dollars, euros and yen to buy the currencies of Brazil, Hungary, Indonesia, South Africa, New Zealand and Australia earned 8% from March 20 to April 10, the biggest three-week gain since at least 1999.

Carry trades have been profitable for most of the past three decades, producing average annual gains of 21% in the 1980s with no down years, according to ABN Amro Holding NV indexes. In the 1990s, these trades continued to expand, although carry trade investors did see three down years, marked by a 54% slide in 1992. From 2000 to 2005, however, the trade was again performing, with average gains of 16 percent. But as the global financial crisis evolved, carry trades went from bad to worse, with three down years seen between 2006-2008, which was the longest streak of losses since 1976-1978, according to Bloomberg, for an average annualized loss of 16.5% through February 28, 2009. The scramble by hedge funds to unwind such trades, plus a USD shortage by overseas banks (the BIS estimates that Europe's banks have USD liabilities of $8 trillion) sent hedgies and banks with big holes in their balance sheets scrambling for USD and yen, thereby fueling substantial rallies in both currencies. However, as Europe's banks get their balance sheets straightened out and risk appetite returns, investors are beginning to return to currency carry trades, funding in USD, JPY (and Euro) to invest in high-yielding emerging market currencies. This will exert increasing downward pressure on both USD and JPY.

However, with Australian and New Zealand rates at 3.0%, returns for yen-based investors aren't as juicy as they used to be. Rather, emerging currencies like the Brazilian Real, South African Rand and Turkish Lira now offer the better returns, resulting in the moves seen in the following charts. Smaller brokers in Japan have been offering Turkish Lira-denominated World Bank bonds with two-digit yields for some time. 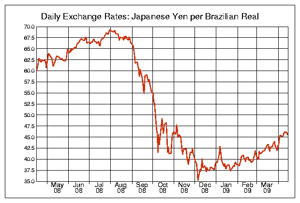 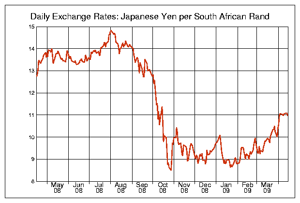