PepsiCo (PEP) announced over the weekend that it has offered about $6 billion to complete its stakes in its two largest bottlers, Pepsi Bottling Group (PBG), of which it already owns 33%, and PepsiAmericas (PAS), of which it already owns 43%. The offers, made up 50-50 of cash and stock, value both firms at a 17% premium to Friday's closing prices. 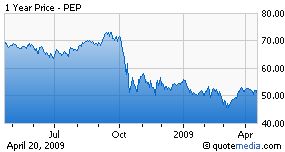 I am a long-term holder of Pepsico as a superlative dividend-growth stock. The company has paid dividends since 1952 and raised them for 36 years. One of the attractions for me has been that Pepsico does not own its bottlers. So I am curious about the decision to purchase the bottlers.

Here is some background: For years, bottlers have been PepsiCo's customers. The soft drink business is unique in that the brand-owning companies do not perform the majority of manufacturing and distribution. They produce syrups and concentrates. Historically, they believed that their greatest growth would come from fountain drinks. Thus, they sold off the bottling rights, which turned out to be a good move in keeping the companies asset-light and less capital-intensive. The beverage companies just produce the concentrates and syrups. Bottlers do the manufacturing and distribution, usually with exclusive rights within a defined geographic region.

The bottlers are generally less profitable and more capital-intensive than the beverage companies they serve. They always face face strong operational challenges. Early estimates are that PepsiCo's reported results in 2008 would have had operating margin cut to 13% from 16%, and its returns on invested capital to 41% from 42%, had it owned the bottlers last year.

So why is PepsiCo buying its bottlers? To streamline and enhance its already formidable distribution capabilities and to gain ripple-effect benefits from that. PepsiCo's news release positions the offers as "strategically transforming."

As you probably know, PepsiCo is much more than a carbonated soft-drink provider. It has been moving more heavily into non-carbonated beverages as its customers' tastes change, and well over half of its sales come from snacks and other non-beverage products. PepsiCo produces, markets, and distributes myriad salty, sweet, and grain-based snacks and other foods. Among the company's many top non-beverage brands are Aunt Jemima, Cap'n Crunch, Cheetos, Cracker Jack, Doritos, Frito-Lay, Fritos, Golden Grain, Lay's, Life, Quaker, Rice-A-Roni, Ruffles, and Tostitos. PepsiCo's dominance in many of its lines give it pricing power. Last year, it pushed through price increases at Frito-Lay North America that did little to detract from volume growth. It often executes price increases by reducing the weight of individual packages rather than by actually increasing the price per package.

PepsiCo's direct store-delivery network is second to none. That said, it may be able to make it even stronger with the addition of its bottlers.

Also, making this move now, with valuations lowered, may be allowing PepsiCo to pick up valuable resources at relatively low cost. Given the 50-50 stock-cash makeup of the offer and its strong balance sheet, PepsiCo does not see any financial contingency to this acquisition.

Pending further review of the financial outcomes, I find the qualitative benefits of this move to be convincing. It does not change my opinion of PepsiCo as a superior dividend-growth stock.

David Van Knapp
23.54K Followers
“Top 30 Dividend Growth Stocks for 2021: A Sensible Guide to Dividend Growth Investingl is the premier source on how to be a dividend growth investor. Learn more at https://www.davevanknapp.com/home .My mission is to help self-directed individual investors profit from stock investing. I contribute articles and studies to both Seeking Alpha and Daily Trade Alert, as well as videos on YouTube. I hold an undergraduate degree in physics from Holy Cross College and a JD from Georgetown University. My wife and I live in Canandaigua, NY.
Follow
7 Comments