The 1918 Spanish Flu was a global flu pandemic that affected nearly half of the world's population at the time (or up to one billion people). The 1918 outbreak was the worst of the 20th century, and it fell under the H1N1 virus subtype, which is the same subtype as the current swine flu outbreak. It's estimated that the 1918 flu killed anywhere from 20 million to 100 million people, which would have equaled a mortality rate of 2.5%-5% of those infected.

The 2009 swine flu is still new to the public, but it is beginning to stoke fear since 152 people have died from it in Mexico as of now. The current swine flu is nowhere near as bad as the 1918 flu pandemic, but we thought we'd look at what the US stock market did during that outbreak period.

Below we have grabbed a chart from a CDC article on the 1918 Influenza that highlights deaths per 1,000 people infected with influenza and/or pneumonia, and overlayed a chart of the Dow Jones Industrial Average. There were three pandemic waves from 1918-1919, with the worst coming from October to December of 1918. While fear of the flu was widespread, the market really didn't react too badly. Following the first pandemic wave, the market sold off a little bit, but then rallied during the summer months before topping out prior to the second wave. The market trended downward during the worst wave of the flu outbreak, but it only went down 10.9% from peak to trough, and then it rallied significantly during and following the third wave.

World War I was also coming to an end in late 1918, so the end of the pandemic and the war probably contributed to the subsequent rally in stocks. 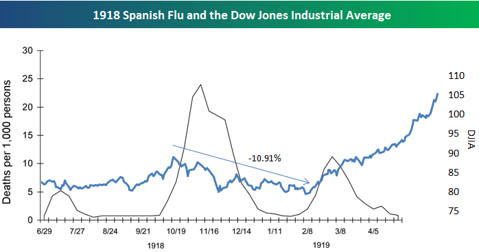 Bespoke Investment Group
44.82K Followers
Bespoke Investment Group provides some of the most original content and intuitive thinking on the Street. Founded by Paul Hickey and Justin Walters, formerly of Birinyi Associates and creators of the acclaimed TickerSense blog, Bespoke offers multiple products that allow anyone, from institutions to the most modest investor, to gain the data and knowledge necessary to make intelligent and profitable investment decisions. Along with running their Think B.I.G. finance blog, Bespoke provides timely investment ideas through its Bespoke Premium (http://bespokepremium.com/) subscription service and also manages money (http://bespokepremium.com/mm) for high net worth individuals. Visit: Bespoke Investment Group (http://bespokeinvest.com/)
Follow
21 Comments