The divergent fortunes within the $200 billion global smartphone market were laid bare this week when Taiwan's HTC (OTC:HTCCY) reported a 98% slump in profits, confirming Samsung (OTCPK:SSNLF) and Apple's (OTC:APPL) seemingly unassailable lead over their rivals.

In 2010, HTC was the world's biggest maker of smartphones that used Google's (GOOG) Android operating system. Now it has joined two other former titans, Nokia (NOK) and BlackBerry (BBRY), in a desperate search for profit and growth.

As HTC reported a slump in first-quarter profits, Samsung Electronics, the world's largest maker of mobile phones and smartphones, was basking in a forecast that its quarterly operating profit would be around 7.7 billion.

The market is splitting into three tiers that allow only for high-end products in developed markets, a bevy of barely profitable products in the middle, and a hugely competitive low-cost segment in developing markets such as China.

In the last quarter of 2012, the last period for which figures are available, Apple and Samsung together shipped 111.5 million smartphones, according to researcher IDC. That's more than 50% of a market that has tripled in volume over that time - and compares to a combined share of less than 20% back in the second quarter of 2010, when the once mighty Nokia had 37%. 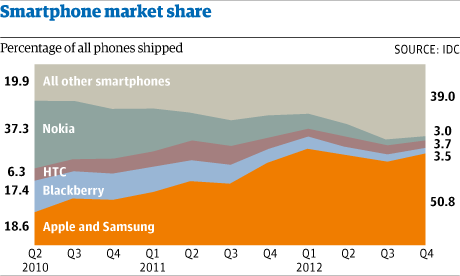 The plight of HTC is even more stark when its market position is viewed through the prism of Google's Android software. Android is the leading operating system thanks to Samsung, beating Apple's iOS system and Microsoft's Windows Phone, which is used by Nokia. If consumers are flocking to Android phones, they are choosing Samsung and not HTC.

But Steve Brazier, chief executive of the research company Canalys, thinks that the HTC One phone, launched in February, offers a way back. "The HTC One is hot," he said. "The problem is it's not really shipping yet, which is why their first-quarter figures were bad. The product was delayed." Nonetheless, it faces a significant challenge from the Samsung Galaxy S4 phones, which also hits retailers' shelves this month.

Brazier adds that there is hope too for the other also-rans. For BlackBerry, he thinks it first needs to calm its U.S. government clients, who have been eyeing the iPhone as an alternative. For Nokia, the solution is easier said than done: "It needs something radically different from what's out there."

HTC, BlackBerry and Nokia are fighting against a rapid decline. Since 2010, they have been squashed down from an aggregate market share of 61% to barely 10%. Now, none has more than 4% of the market. Samsung is at the top with 29%, ahead of Apple with nearly 22%.

So what does this mean for Apple fans and investors? Well for one, it shows that the tech giant isn't doing nearly as bad as the stock portrays it to be doing. It's no secret that in recent months, Apple has taken one of the largest dives in market history - going from a high of $705/share in September of 2012, to a dismal current price of $443.66/share. Sure, the company's profit margins and sales have been declining steadily over the last few months, but is that vindication for the precipitous decline? One of the biggest investment banks on Wall Street, Goldman Sachs (GS), has been quoted saying that they think Apple is the most undervalued stock they cover. Goldman Sachs' research department has put out a list with the top 40 most undervalued companies compared to its analysts' price targets; Apple was the unanimous winner.

A decade ago, Apple cornered the markets in small hard drives and then solid-state storage to build its iPod, and then iPod nano, and dominate the music player market. Now it uses its growing cash pile to hire factories and production well ahead of time - locking rivals out. "HTC has a real scale problem," says Evans, the Enders analyst. "It's a problem that Nokia is starting to face as well. It's a problem of the reach and power that Apple and Samsung can bring to the market."

Analysts argue that Apple needs to do something radical too to catch the growth in emerging markets as the west becomes saturated. A low-cost iPhone is widely expected. That could consolidate the Apple-Samsung duopoly more firmly. Although many believe that Apple is just coasting on the aftershock of Steve Jobs' successes, the aforementioned statistics clearly show that Apple still has a considerable market share and remains one of the smartphone leaders. With these numbers, and analyst proclamations that Apple is undervalued, I strongly believe it is a stock you should consider and definitely keep an eye on in the succeeding months.

Wall Street Wisdom
440 Followers
A big thank you to everyone who just helped me pass 30,000 followers on twitter! Follow me at: @WS_Wisdom Wall Street Wisdom is a Registered Investment Advisor, with both CFA & CPA certification, focused on customized individual and small-business 401(k) portfolio management. He received an MBA from the University of Chicago Booth School of Business, where he was the recipient of the Forté Foundation Fellowship in Finance. Prior to becoming a portfolio manager, Wall Street Wisdom had been covering the global markets and has over 25 years of financial expertise. He has worked at economic consulting firms and global investment banks around the United States, and is currently in the process of starting his own investing firm. Wall Street Wisdom employ's many different investing strategies, but is a strong advocate of fundamental analysis. Wall Street Wisdom's financial articles discuss current market conditions and pick various stocks that show opportunities to make 2-4%, and long term investments with buy, sell, and hold ratings. If you have any comments or questions at any time, you can reach me at WallStreetWisdom1@gmail.com