The Conference Board’s Consumer Confidence Index significantly increased from 26.9 in March 2009 to 39.2 in April 2009, in large part because of more optimism for business conditions. The Index hit an all-time low in February 2009 and slightly improved in March, reports Retailer Daily. 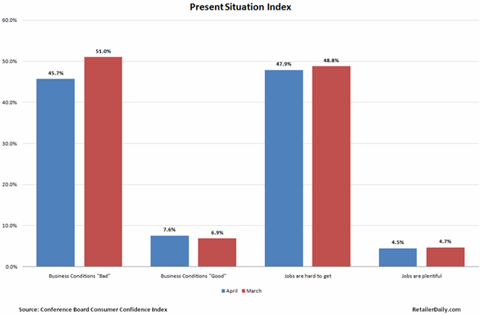 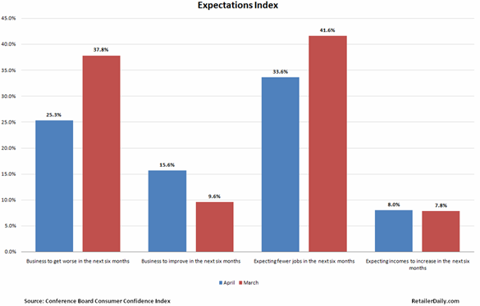 Lynn Franco, director of the Conference Board Consumer Research Center, cautioned that despite improvements, the Consumer Confidence Index is still reading at low levels. “The sharp increase in the Expectations Index suggests that consumers believe the economy is nearing a bottom, however, this Index still remains well below levels associated with strong economic growth,” she said.

Although overall levels of the Consumer Confidence Index are still low, retailers and other businesses can still take the significant growth in its numbers, especially in the Expectations Index, as a positive sign about the current mindset of US consumers. There have been a number of mixed positive and negative economic and consumer behavior signals so far this year:

About the survey: The Consumer Confidence Survey is based on a representative sample of 5,000 US households. The monthly survey is conducted for The Conference Board by TNS. The cutoff date for April’s preliminary results was April 21.

Marketing Charts
163 Followers
MarketingCharts (http://www.MarketingCharts.com) compiles a daily collection of the most interesting media and market research updates. It is written by the staff of Watershed Publishing, which includes the editors of MarketingVOX (http://www.marketingvox.com), Media Buyer Planner (http://www.mediabuyerplanner.com/) and Retailer Daily (http://www.RetailerDaily.com). While these editors receive regular access to proprietary research data from most of the key media-related research firms, no editorial restrictions have been placed on their usage.