With a decade of surging gold prices behind us and a more recent period of weakness that has sent bullion back to mid-2011 levels, investors are left wondering what to do. This question actually consists of two real dilemmas. Firstly, for those owning copious amounts of bullion, gold stocks, or other precious metals - do I sell? For everyone else the question reduces down to, should I buy because gold is "cheap"?

Burdening the decision making of investors is the overabundance of polarized articles by "gold-bugs" and those less in favor of the yellow metal. Even billionaire investor Warren Buffett is frequently cited in the debate through his 1998 observations on gold in which he stated, "Gold gets dug out of the ground… we melt it down, dig another hole, bury it again and pay people to stand around guarding it. It has no utility. Anyone watching from Mars would be scratching their head."

It is true that gold is a relatively useless metal. It is not used widely in electronics unlike silver, it isn't widely used in the automotive industry unlike platinum, nor does it conduct electricity as well as copper, and we needn't even begin to make a comparison on the uses of gold versus steel. However, it is important to remember that gold has spanned thousands of years as a cornerstone of monetary systems. Ancient Egyptians used gold bars to standardize exchange of goods and gold even backed the US dollar until as recently as the 1970s.

It is because of this that gold investors should ultimately view gold as a currency similar to the Yen, Euro, or US Greenback. The value of gold comes from the fact that it is an element and can't be created thereby holding its value through scarcity and not through any industrial uses. This point becomes even more important as governments around the world look to devalue their currencies through stimulus programs such as the US Fed's Quantitative Easing, or as in Japan with their recent attempts to reflate their deflationary economy through massive Yen devaluation. As these fiat currencies become more abundant, their purchasing power should ultimately suffer. Or so the common argument goes. 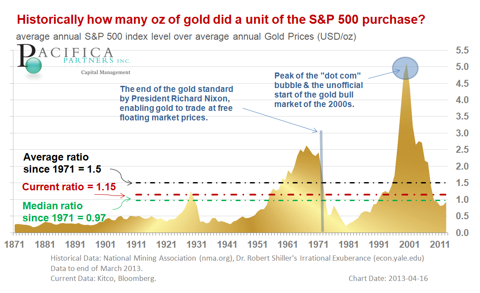 Click Here to view a larger version of this diagram.

The natural question that now arises is if gold is a currency, then what is its buying power? The chart above examines this by comparing stocks, S&P 500, to gold bullion for the last 142 years. Specifically, how many ounces of gold can be purchased by one "unit" of the S&P 500 (US stocks). The higher the number, the less buying power gold has versus stocks, thus gold is "cheap" relative to stocks historically. The lower the number, the greater buying power gold has, or gold is "expensive" relative to stocks historically.

The bullion-stock ratio peaked during the dot com bubble as equity markets soared and bullion pricing remained stagnant. The ratio reached a record of five ounces of gold for each "unit" of the S&P 500. The gold bull market that ensued for the following decade reduced the ratio to just under a value of one. Comparing this ratio to the period after 1971 when gold was enabled to be freely priced following the abolishment of the gold standard is revealing. The purchasing power of gold relative to US stocks is actually very close to what it has been over the last four decades. Although gold does not look extremely cheap relative to stocks as it did in 2000, it also does not look extremely expensive as it did in the early 1980s. Thus fleeing bullion as a result of a belief that its buying power is over extended may be less than prudent.

The triggering event in the panicked sale of bullion this week was the announcement by Cyprus that it would be selling €400m worth of gold from its gold reserves. This amounts to a sizeable fraction of Cypriot gold holdings. However, according to the World Gold Council, Cypriot gold holdings are only the 59th largest gold holdings in the world. Thus even a sale of their entire gold reserves, or 13.9 tonnes, would amount to only 0.17% of US reserves or 0.059% of the gold reserves of the 10 largest countries and organizations (including the IMF). Putting the Cypriot gold sale into perspective should make investors question whether the magnitude on the bullion sell-off is warranted. The above comparisons do not even take into consideration the 1,100+ tonnes of bullion held by the SPDR GLD gold shares exchange traded fund.

Canadian investors whose portfolios are heavy on bullion should be aware that despite the apparent reasonableness in gold prices versus stocks, gold price volatility will likely continue. Canada being the seventh largest gold producer in the world and home of five of the ten largest gold companies is already intimately tied to the strength or weakness of bullion. Approximately 10% of all Canadian publicly traded companies are gold or precious metal producers and exploration companies. With demand for the precious metal comes demand for the Canadian dollar and therefore a very palpable impact on the Canadian consumer.

Disclosure: I am long GLD. I wrote this article myself, and it expresses my own opinions. I am not receiving compensation for it. I have no business relationship with any company whose stock is mentioned in this article.

Additional disclosure: This report is for informational purposes only and is neither a solicitation for the purchase of securities nor an offer of securities. The information contained in this report has been compiled from sources we believe to be reliable, however, we make no guarantee, representation or warranty, expressed or implied, as to such information’s accuracy or completeness. All opinions and estimates contained in this report, whether or not our own, are based on assumptions we believe to be reasonable as of the date of the report and are subject to change without notice. Past performance is not indicative of future performance. Please note that, as at the date of this report, our firm may hold positions in some of the companies mentioned. Copyright (C) 2013 Pacifica Partners Capital Management Inc. All rights reserved.

Pacifica Partners
47 Followers
This account is no longer maintained