The US Bureau of Economic Analysis (BEA) recently announced that starting in the 3rd quarter 2013 it will be revising the way it calculates Gross Domestic Product (GDP). The link is here.

This revision involves adding various intangible assets such as research and development (R&D) costs, creative works and unfunded pension plan amounts into the GDP calculation. The BEA stated this change is being made due to the "changing nature of US output" but it appears to be another Orwellian tactic on the part of government to mask the true health of the US economy.

How GDP is Calculated

GDP can be calculated in one of three ways:

The expenses incurred to create a television series will now carry the same weight in the gross investment component as costs to build an oil rig or factory. An example was given by the BEA that stated the GDP of New Mexico would increase by 10% because they "host a lot of military R&D," while the GDP of Louisiana would increase only 0.6% as it apparently has only the oil and gas industry. It would be interesting to see how Texas and North Dakota GDP will fare.

Unfunded pension liabilities or "promises to pay" at the state and municipal level will also be added to the government spending component.

It seems the definition of a normal economy has been revised. States and companies with real producing assets such as manufacturing or oil and gas production will now appear to be laggards behind states like California that have large R&D and creative work expenditures. California may be able to create prosperity with a few journal entries. Surely the Californians that left for jobs in neighboring states and Texas will now repatriate.

This is not the first time the components of GDP have been modified. An adjustment was made on the basis of a statistical standard recommended by the United Nations in 1992 called ''93SNA.'' Among items included in the 93SNA not in previous GDP calculation methods were expenditures by companies and governments for having software developers write software to meet their specific needs under outsourcing arrangements. Also, the depreciation cost on public infrastructure, such as roads, bridges and dams, is now considered part of government spending, boosting overall public-sector outlays. The divergence in government statistics from more realistic statistics (courtesy of Shadow Stats) appears evident. 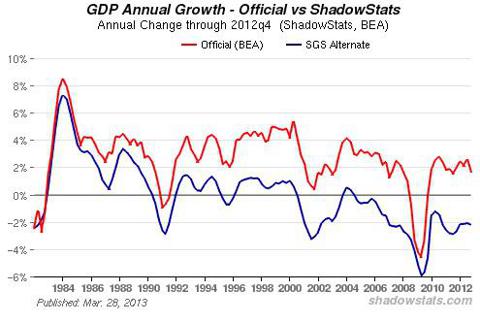 In addition, other key economic statistics such as the consumer price index (CPI) and unemployment have been gradually altered over time to make the data appear smaller than they are in reality. The real statistics for these two components and their dissimilarity from the government numbers are exhibited here (courtesy of Shadow Stats). 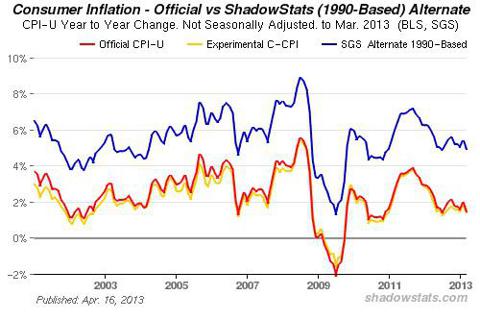 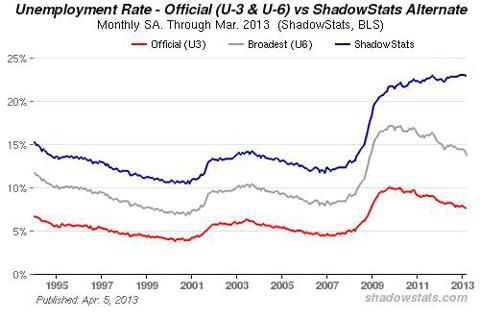 The government plans to rewrite history by revising GDP numbers back to 1929.

Including the above components into GDP will make a comparison of US GDP to GDP of other countries impossible. Even if the other countries follow the same methodology, the guidelines have become so liberal and subjective that no meaningful comparison is now possible. Countries with high GDP to debt ratios will have a vested interest inflating their GDP to make their economies appear robust.

In addition, states and municipalities with underfunded plans will also seem prosperous. States such as California and New York will be at less risk of being downgraded. Maybe if this new accounting had been implemented sooner, Stockton would not have gone bankrupt.

The day of reckoning is coming and fuzzy accounting only kicks the proverbial can down the road a few more inches. The can will soon be too heavy to kick. When this happens, interest rates will increase dramatically and the US dollar will crash. Long-term investors should hedge by diversifying out of the US dollar into foreign stocks, currencies and commodities.

Alpha Shark
287 Followers
My extensive experience working overseas has provided a solid foundation for my investment philosophy. I have found that travel is a far better teacher than a conventional education. The experiences and knowledge one gains on the ground around the world cannot be taught in any classroom.