Medical Marijuana Inc. (OTCPK:MJNA) has been selling off for the past two months despite an abundance of good news, including bullish guidance for 2013 and 2014 and a strong Q1. Not even the 4/20 celebration was able to shake the stock out of its downward trajectory, as the stock just tested the low price since rocketing to .50 earlier this year, trading as low as .185 as it sold off on massive volume before closing near .21: 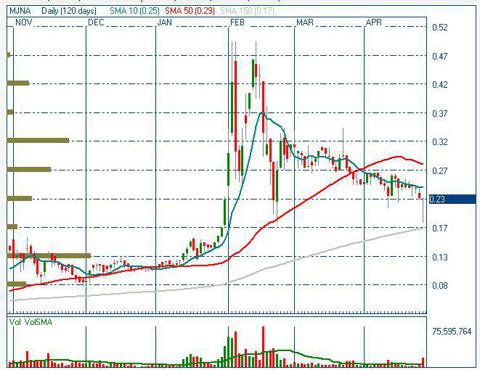 For some background, I have written about MJNA several times since mid-February:

My thesis has been that the company has questionable financials, and that is the issue I want to explore more closely now that they have amended their Annual Statement as of 4/24. In my last article, I had suggested that we need to wait until 5/15, the date by which the company intends to file its audited Q1 report, to better understand how it is accounting for its transaction with CannaVEST (CANV.OB) that I described in the second article. Investors should be aware that the company has booked $4.5mm in sales in Q4 on the basis of shares received from an affiliated company in January, weeks after the quarter ended. This revelation is a smoking gun for those of us who have been questioning the financials of the company.

On January 22nd, MJNA issued a press release with a captivating subtitle:

The company reported a net income of $3.39mm on sales of $5.1mm for the 4th quarter, massive growth from the prior quarter or the year-ago 4th quarter. The rest of the press release covered a lot of issues but provided little clarity regarding how the company had shown such impressive growth. As you can see in the chart above, this bullish news sent the stock soaring over the next few weeks.

On February 8th, the company issued another press release that indicated it had filed its audited report. Interestingly, while the sales actually increased slightly ($5.2mm), the net income was reduced to $3.2mm. Here was the first time the company mentioned the transaction in question:

In addition to the Operational Highlights previously announced on January 22, 2012, the Company has realized a variety of significant milestones which are described in the audit report, as well as detailed below:

This is pretty vague, in my opinion. The company received "$4.5mm," but when? Turning to the filing issued that same day, it seemed like this was not in Q4, as it is described as a "subsequent event":

The very basic income statement from the quarterly filing was of no help, as revenues (which it calls "Income") were a single line item, with no further breakdown by category: 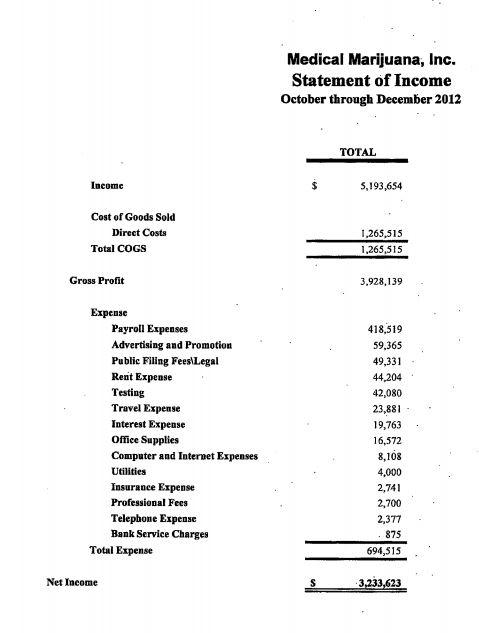 Now, this is important, as $4.5mm would be the vast majority of the $5.193mm in sales. At this point, the way the transaction had been portrayed, it seemed like the $4.5mm was a "subsequent event" that would show up in Q1, since the company had "received its first installment payment." Otherwise, the sales, absent this transaction if it were included, would be just $693K, which would be quite low considering the prior quarter was reported as $3mm (unaudited).

A few days later, CANV filed an 8-K that very clearly showed this to be a 2013 transaction and a very troubling one to say the least:

On December 31, 2012, we entered into an Agreement for Purchase and Sale of Assets (the "Purchase Agreement") with PhytoSPHERE Systems, LLC, a Delaware limited liability company ("PhytoSPHERE"), whereby the Company acquired certain assets of PhytoSPHERE in exchange for an aggregate payment of $35,000,000, payable in five (5) installments of either cash or common stock of the Company, in the sole discretion of the Company. Pursuant to the Agreement, the Company acquired from PhytoSPHERE certain tangible assets, including equipment and inventory, all web domains of PhytoSPHERE, existing bank accounts with a total balance of $50,774.55, phone numbers, e-mail addresses and postal addresses, vendor lists, permits, licenses and other approvals, and all existing and pending contracts. Notably, pursuant to the Purchase Agreement we acquired from PhytoSPHERE all of its rights, and assumed all of its liabilities, under contracts with hemp production and processing facilities in three foreign countries in Europe, which allows us to secure raw product for the development and production of products. We also secured the exclusive license to the name "PhytoSPHERE" and "PhytoSPHERE Systems" for use in the development and commercialization of hemp-based products.

The agreement was signed on 12/31, but notice the structure of the deal:

The installment payments could be either cash or stock of a company with no assets, no employees and no trading history with all of the shares closely held. Should we be surprised that it was the stock? Notice that the shares were issued in 2013. I was still expecting that this "revenue" would be booked in Q1.

On February 19th, the company issued its Annual Report. On page 10, it described the transaction: 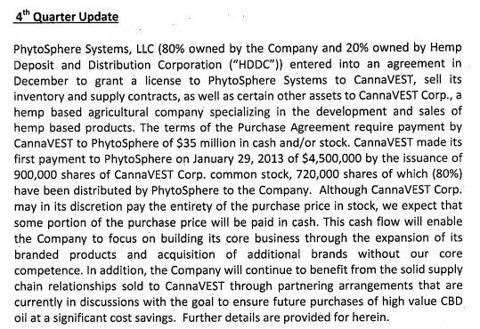 At this point, it still seemed, at least to me, that this was revenue that would be booked in Q1. After all, the stock wasn't even trading on 12/31 (not in substantial volume in any event, and almost 100% of the stock was held by insiders). The company, then known as Foreclosure Solutions, had no material assets and had historically traded at a small fraction of the $5 price used. 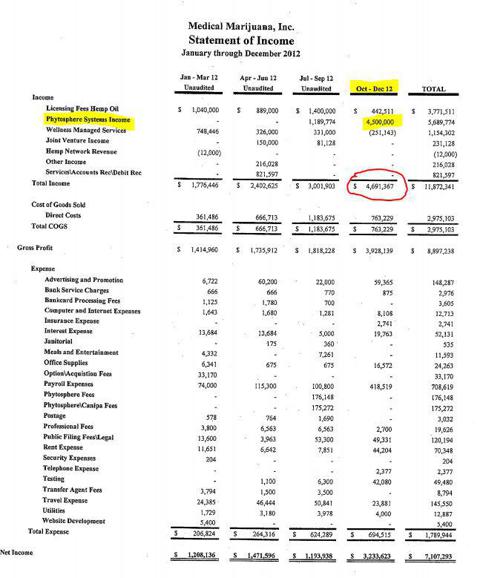 There it is! The $4.5mm transaction was in the 4th quarter. Why not all $35mm??? Additionally, their audited numbers have changed. Originally, they had reported $5.1mm in sales in their first press release, but the Anthony Imbimbo & Associates audited numbers had increased to $5.19mm. Now, they are calling it $4.69mm. Shockingly, this questionable $4.5mm represents 96% of their sales during the quarter and 38% of full-year sales. Gross profit and net income did not change.

The company included an updated balance sheet that was most interesting in that it provided all four quarters but didn't include the 12/31/11 figures anywhere. For simplicity, since it's the exact same for Q4, let's go back to MJNA's audited Q4 balance sheet (the only audited statement they have released): 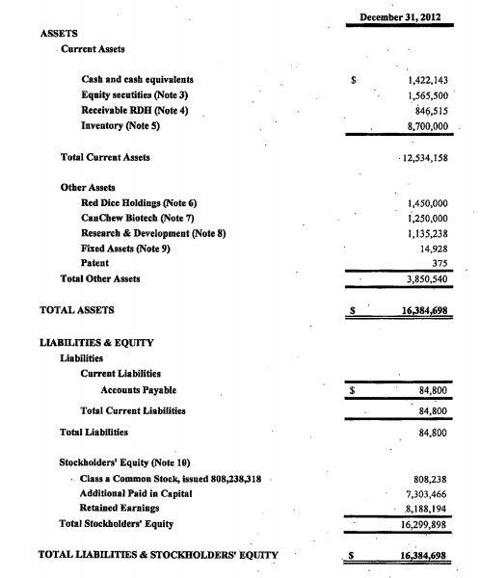 MJNA may take solace in the fact that CANV is trading substantially higher than the $5 at which the first transaction was valued, but investors should be aware that CANV trades only sporadically. According to Yahoo! Finance, it hasn't even traded on 1/2 the 18 trading sessions in April, and the month-to-date volume is just 2400 shares. This works out to 133 shares per day!

As described above, MJNA received 720K shares in late January. While the stock has traded well above the $6 collar, CANV still elected to pay shares rather than cash in early April for the payment that was due by March 30, as disclosed on 4/16 in its 10-K:

Since MJNA owns 80% of PhytoSPHERE, it now has an additional 800K shares, for a total of 1.52mm shares of CANV. Actually, for reasons that are unclear, PhytoSPHERE filed as owning 1mm shares on 4/22, while MJNA filed as owning 720K shares on 2/12. I assume that Hemp Deposit & Distribution Corp, the minority holder of PhytoSPHERE and majority holder of MJNA, didn't file because their stake presumably of 180K is below 5% of CANV. At 133 shares per day, it would take about 46 years to sell what they have received so far, and there is more scheduled to arrive. CANV couldn't sell stock, and MJNA likely won't be able to do so either.

MJNA's bullish press release in January regarding its "1100%" increase in sales sparked a massive rally. Weeks later, they disclosed a transaction but never specifically stated that it represented 96% of their Q4 sales, as indicated on their amended income statement but not on their original audited Q4 income statement. The transaction itself is quite suspicious, a transfer of inventory valued at $8.7mm (and carried still on their balance sheet at year-end despite the "sale") and various assets for $35mm in cash (not likely) or stock (of a company with no employees and negligible assets with a limited trading history and extremely poor liquidity due to almost all of the shares being held by insiders). How was the company able to call this revenue ($4.5mm received in illiquid shares in late January, after their press release trumpeting "strong growth of the Company's core business"). The lack of transparency makes it difficult to trust management, which has pushed the share-count up from 246mm at the end of 2010 to at least 855mm shares now, but this transaction and how it has been conveyed should send any shareholder running for the exit now that the smoke has cleared.

Alan Brochstein, CFA
70.87K Followers
Author of 420 Investor
Capitalize on cannabis with the help of a person on top of it for 9+ years

Alan Brochstein, CFA, was one of the first investment professionals to focus exclusively on the cannabis industry. He has run 420 Investor, a subscription-based due diligence platform for investors interested in the publicly-traded cannabis stocks that he is moving to Seeking Alpha, since 2013, and he is also the managing partner of New Cannabis Ventures, a leading provider of relevant financial information in the cannabis industry since 2015. Alan is based in Houston. He and his wife have two adult children.

Before focusing exclusively on the cannabis industry in early 2014, Alan had worked in the securities industry since 1986, primarily with the responsibility for managing investments in institutional environments until he founded AB Analytical Services in 2007 in order to provide independent research and consulting to registered investment advisors. In addition to advising several different hedge funds and investment managers, including Friedberg Investment Management, where he participated as a member of its investment management committee, Alan was also a senior analyst for the independent research firm Management CV. In 2008, he began providing a first-of-its-kind subscription-based service for individual investors, Invest By Model, which offered two different portfolios that investors could replicate in their own accounts. Alan also offered The Analytical Trader at Marketfy, where he used fundamental and technical analysis in a disciplined process to offer specific trade ideas geared towards swing traders.