There have been many articles and posts in the past few weeks that emphatically make the case that the current rally is not sustainable. It’s a “sucker’s rally” they say, a secondary trend within a primary bear market. Opinions run hot. Conspiracy theories abound.

To declare the bear market is over (that it ended on March 9), you must show that it has reversed and been replaced by a bull market.

What time frame is required for a bull market? Surprisingly, this question is often ignored, even though it is a core issue. The two sides talk right past each other as they assume everyone is using the same durational requirement.

We do not want to get hung up on semantics, but duration is key. The important question is not whether the current trend is secular, primary, or secondary. Rather, the question is whether the rally is “investable.” That is, can an attentive, sensible investor, without frenetic trading, profit from it because of its length and magnitude?

Most of us require a rally to last more than a day or a week to qualify as an investable trend. Most of us would also accept a rally such as the one between October, 2002, and October, 2007, a five-year period during which the S&P 500 rose by 101%, as investable and as a bull market. (Not everyone does—some see that as a bear-market rally in the midst of a secular bear market that began in 2000 and continues to the present day.)

The popular notion of a bull market is a 20% rise in the general market over some extended period of time. We must get more specific. The well-respected Ned David Research organization uses two definitions: A bull market occurs (1) whenever there is a 30% rise in the stock market over a 50-calendar-day period, or (2) a 13% rise after 155 calendar days.

The second definition has not been achieved: That requires 155 calendar days. But it also requires only a 13% increase. So the S&P 500 could fall to 765 (or 18% from where it stood at the open on Monday, May 11) and still meet the requirements of the second definition.

We can’t use the second definition as a benchmark, since our subject of interest is the sustainability of the current rally going forward. But if we tack Davis’ second definition onto what has already been achieved--that is, require an additional 13% rise in the next 155 calendar days--we have an issue that can be debated intelligently.

If we do that, we can frame the question thus: Will the current bull market extend itself, beginning May 11, 2009, such that the market is up at least 13% more over 155 calendar days? That is, will the S&P 500 reach at least 1050 by October 12, 2009? That would certainly be a useful, investable rally. It would comprise a total increase of 55% since the March 9 low and a total duration of about seven months.

The best argument that the current rally is sustainable is that rallies such as the current one have been sustained before, repeatedly. Historically, the stock market has begun its recovery several months before the end of a recession. 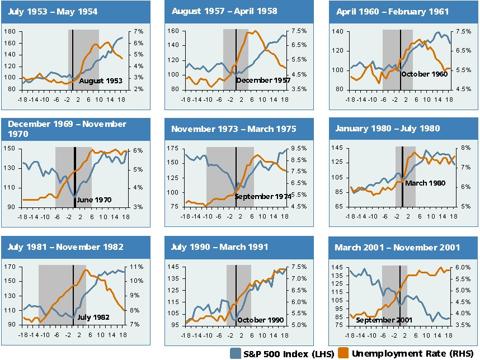 These diagrams illustrate why the market itself is considered a leading, not coincident or lagging, indicator. (The S&P 500 is one of the components of the Conference Board’s Index of Leading Economic Indicators.)

The “unsustainable" camp argues that the current rally is unsustainable, because the economy is still getting worse. But that is almost always true when the market turns up during a recession. For example, take unemployment, one of the strongest components of a recession, as shown on the diagrams. Again with the exception of 2001, unemployment continued to get worse for several months after the market reached its bottom. In fact unemployment is a well-known lagging indicator of the stock market. For the Conference Board, “average duration of unemployment” is a component of what they call their Lagging Economic Index.

So, if the first leg of our argument is that the market typically starts upward about six months before the end of a recession, the next leg of the argument is to back that up with evidence that the recession may already be in its last few months.

And, in fact, there is some evidence to this effect. While the “unsustainable" camp ridicules this “green shoots” evidence, there are several data points that suggest that the economy may be bottoming out, and that the recession may be over in about six months.

In the May 8, 2009 edition of the Vanguard Economic Week in Review, they stated that “While we're still mired in the recession, there are signs the economic downturn has diminished in intensity. Jobless claims are easing, there is more business activity in the service sector, and construction spending is on the rise. Consumer confidence is still not what it used to be, but consumers are spending slightly more, while still reducing their credit card debts.”

In an article “Spying the Green Shoots,” published May 9, Morningstar’s Robert Johnson (CFA), associate director of economic analysis, stated that he expects the economy to bottom sometime in the second or third quarter of 2009, with unemployment to peak later this year or early 2010. Calling the early positive signs “still fragile” and the current situation “bad,” Johnson wrote, “[W]e must strengthen our financial system and avoid a catastrophic auto industry shutdown for things to continue to improve.” However, he noted that:

Many of these same points were also mentioned by Fed Chairman Ben Bernanke in his testimony on economic outlook before the Joint Economic Committee on May 5. Bernanke said:

We continue to expect economic activity to bottom out, then to turn up later this year. Key elements of this forecast are our assessments that the housing market is beginning to stabilize and that the sharp inventory liquidation that has been in progress will slow over the next few quarters. Final demand should also be supported by fiscal and monetary stimulus. An important caveat is that our forecast assumes continuing gradual repair of the financial system; a relapse in financial conditions would be a significant drag on economic activity and could cause the incipient recovery to stall.

The mentions of confidence levels lead to the next leg of the argument that the current rally is sustainable. A bear market is ended by a reversal of the things that caused it. An improving economy bolsters corporate earnings. Investors realize that stocks of good companies have become bargains, and they move in to buy the under-priced stocks. Confidence begins to return, the desire to get back into stocks grows, multiples go up, and the bear market is over. Bull markets are characterized by optimism, investor confidence, and expectations that strong results will continue. The items listed above all suggest that such a turn in investor and consumer confidence may be taking place, despite the continued troubled state of the economy at the moment.

And speaking of valuations, there is still room to run for many stocks. Turning again to Morningstar, they maintain a clever Market Valuation Graph that compares actual current stock prices to what they compute (using discounted cash-flow techniques) are the current “fair values” of the same stocks. For all the stocks they cover, that current ratio is 91%, meaning that they believe that all the stocks they cover (about 2000) are about 9% undervalued. For stocks they consider to have a “low” uncertainty in fair value, the ratio is 78%, meaning by their calculations, those stocks are 22% undervalued. P/E multiples have been rising during the current rally, which is another characteristic of bull markets.

A fourth argument can be made based on simple technical concepts. During the current rally, the S&P 500 Index has climbed up through its 20-day and 50-day simple moving averages (SMAs). It is approaching its 200-day SMA. The 20-day SMA made a “golden cross” upward through the 50-day, generally a bullish sign. This happened about five weeks ago. While the 200-day SMA can be (and is) seen as a barrier (“resistance") by the “unsustainable" camp to further upward movement of the index, it is certainly possible that the index itself, and then the shorter SMAs, will cross upwards through the 200-day SMA. If they do this, it will be a powerful technical signal that a long-lasting rally—a bull market—is taking place.

While the bearish point of view certainly has strong adherents and plenty of evidence, the bullish point of view has growing evidence too. To repeat, the strongest argument that this rally is sustainable is the historical pattern that bull markets start about 6 months before the end of recessions, backed up by growing evidence that the current recession is in its final months.

Anybody who claims to know whether this is a bear-market rally or the end of the bear market is blowing smoke. Nobody knows at the time it is happening. The best anyone can do is make educated guesses, based on technical analysis, fundamental analysis, or whatever.

Disclosure: The author cautiously believes that the current rally is sustainable. He is long SPY, with fairly tight sell-stops.

David Van Knapp
23.53K Followers
“Top 30 Dividend Growth Stocks for 2021: A Sensible Guide to Dividend Growth Investingl is the premier source on how to be a dividend growth investor. Learn more at https://www.davevanknapp.com/home .My mission is to help self-directed individual investors profit from stock investing. I contribute articles and studies to both Seeking Alpha and Daily Trade Alert, as well as videos on YouTube. I hold an undergraduate degree in physics from Holy Cross College and a JD from Georgetown University. My wife and I live in Canandaigua, NY.
Follow
48 Comments