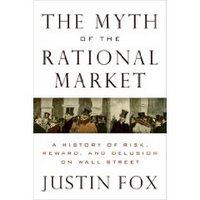 Most non-economists find the 'efficient markets hypothesis' the most absurd belief that most economists believe. The latest broadside is Justin Fox's book The Myth of the Rational Market. A lot of this gets into semantics. If you think efficient markets mean they are always correct, then clearly this is a stupid theory. But it only means that it is highly improbable to outperform the market, say by reading blogs about finance, listening to CNBC, and then buying or selling securities traded in liquid exchanges. The market price is an unbiased predictor of future prices, conditional on all the current information (there is a risk premium that complicates this, but I wrote about this in my upcoming book and will talk about that when released in a few weeks).

There are lots of straw men in this book. Efficient markets does not imply price changes ('errors'?) are normally distributed. LTCM's failure, and its positions, were not predicated on the Black-Scholes-Merton option model's assumptions. No one believes markets are perfect.

Eric Falkenstein
302 Followers
Eric Falkenstein (http://www.efalken.com) is a consultant and investment adviser for CapRock Advisers LLC, based in Minneapolis. His website, defprob.com (http://www.defprob.com), presents data on nonfinancial corporate debt, and equity indices. His blog, Falkenblog (http://falkenblog.blogspot.com/), is mainly about economics and finance. Prior published articles are kept here (http://www.efalken.com/papers/index.html). Prior to his current position, Eric was a long/short equity portfolio manager at Deephaven Capital Management and Telluride Capital Management. Prior to that, at Moody's he developed RiskCalcTM, the leading tool for estimating private firm default risk. At KeyCorp bank, he was Head of Capital Allocations and Quantitative Research, and implemented various capital allocation processes around the bank. He has a PhD in economics from Northwestern University. His recent book, Finding Alpha, was published by Wiley Finance. Visit his blog: Falkenblog (http://falkenblog.blogspot.com/)