Gold and silver changed course and fell during last week. Will gold and silver bounce back this week? As I have pointed out in the latest precious metals weekly outlook, several reports, events and speeches will take place during the upcoming week that may affect bullion prices. These items include: EU GDP, Philly Fed survey, Bernanke's speech, U.S. housing starts, U.S. PPI, Canada's manufacturing sales, U.S. and Canada's CPI, and U.S. jobless claims. On Monday's agenda: U.S. Retail Sales Report and Euro-Group meetings. 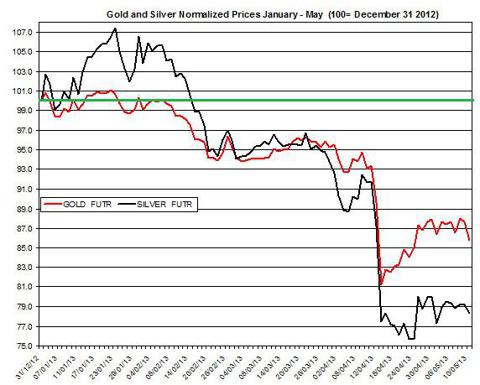 Agenda For Monday, May 13th

Euro-Group Meetings: In these meetings, the Euro-Group President and the EU ministers of finance are expected to go over the Cyprus debt relief program. They may also talk about the future steps needed to strengthen the EU banking system;

U.S. Retail Sales Report: This report will show the monthly developments in the retail sales and food services for April 2013; in the previous report for March, the retail sales slightly declined by 0.4%. If the report shows another drop in sales, it could serve as a negative signal for the recovery of the U.S. economy.

The euro/USD declined on Friday by 0.41% to 1.2989. During last week, the euro/USD decreased by 0.95%. Moreover, other currencies such as the Japanese yen and Aussie dollar also depreciated last week against the U.S. dollar by 2.66% and 2.85%, respectively. The decision of the RBA to cut its cash rate by 0.25pp may have been among the reasons for the recent depreciation of the aussie. The depreciation of these currencies against the U.S dollar may have partly contributed to the fall of gold and silver during the previous week. The correlations among gold, Canadian dollar and aussie dollar remained strong and positive: during April and May the linear correlation between gold and USD/CAD reached -0.66 (daily percent changes); the linear correlation between gold and the AUD/USD was 0.62 (daily percent changes). If these correlations continue to hold on, the direction of the aussie, Canadian dollar and euro are likely to partly affect bullion rates.

The ongoing fall in GLD's gold holdings, which has declined by almost 14% in the past two months, continues to indicate the demand for gold as an investment is diminishing. Last week, Bernanke didn't talk about monetary policy, but he may due so in this week's speech. The title of his speech is "Economic Prospects for the Long Run". His speech might affect commodities prices and the USD. In the U.S., several reports will come out including: retail sales, housing starts, Philly fed survey, PPI, CPI and jobless claims. These reports will give a sense as to the progress of the U.S. economy. If these reports don't show growth, they could pull down the U.S. dollar, which could help rally bullion rates. If the leading currencies such as the euro and aussie dollar change direction and rally against the USD, they could pull up precious metals. Further, if the Indian rupee changes direction and appreciates against the USD, it could raise the gold imports into India. Finally, if the stock markets will continue to increase, this may adversely affect the demand for precious metals as an investment.

For further reading, see: Gold and Silver Outlook for May