Although yields have risen lately and bond prices have fallen, this is no party for bond bears as the market is doing very little very slowly. The 2.40% level in the 10-Year Note yield is very important and although it was reached twice before, in October of 2011 and in March of last year, the rally quickly fizzled and new lows were reached in July of last year below 1.50%. Will this time be different? 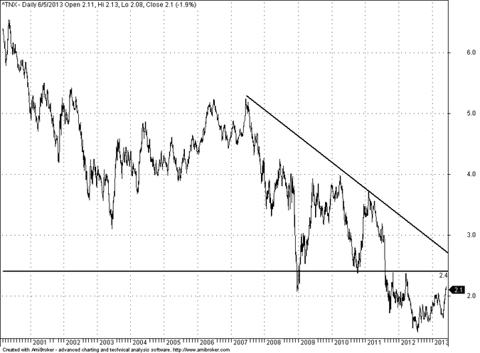 It may be seen from the above daily chart of the 10-Year Note yield how the horizontal resistance at 2.40% was tested twice before, during 2011 and 2012. The last test was followed by another all-time low below 1.50%. I am not sure this is the start of a bond bear market and I am definitely not a prophet. At the same time I realize that technical analysis cannot be used for forecasting purposes because it is fundamentals that drive the markets, not technicals, but it can be used as a risk management tool. Thus, I would not bet a lot of money on a bond bear market unless I saw the 2.40% level taken out decisively. 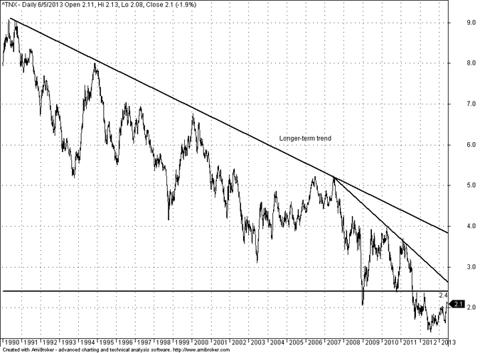 The longer-term chart of the 10-Year Note yield shows the downtrend clearly and that the recent spike in yields is for now irrelevant to the overall picture. A rise in yields will become relevant if the 3% level is reached. Then we could talk about the possibility of a bond bear market. For now, it is hard to tell if the recent rise is due to random volatility or due to a deterministic trend supported by changing fundamental conditions. Thus, reducing positions or lowering portfolio duration may be prudent moves at this point but in my opinion it may be too early for short positions in bonds or long positions in inverse ETF vehicles like (TBF), which moves opposite to TLT.

The role of Europe

A lot about the future course of the U.S. bond market will depend not only on domestic economic conditions but also on how things unravel in Europe. The latest banking crisis solution in Europe came in the form of a brutal depositor bail-in and things have calmed down a little but the EU is like a huge volcano ready to erupt. The lenders in Europe refuse to offer any kind of a major new deal to the borrowers and enforce austerity instead. This cannot last for long as in the past similar economic situations have led to the rise of extremist powers, to unrest and ultimately to wars. Lenders must also accept a generous haircut because lenders cannot exist without borrowers. It appears that European lenders do not want to accept this fact and struggle to preserve their purchasing power at any cost. This for now keeps rates low because inflation is under control in the absence of new money printing. But at some point the demands of the masses (the borrowers) must either be met at least partially with the consequence of a higher inflation and lower bond prices as a result, or social unrest will erupt. If this scenario occurs, there will be a massive flight to quality U.S. bonds, higher prices and lower yields. German politicians are probably mistaken to think that austerity can go for much longer in Europe. That part of the world is notorious for its brutal conflicts. Germany, although in my opinion correct in principle about EU economic policy and the need to lower deficits, will soon have to give in and either accept higher inflation of leave the euro altogether before it is too late.

Disclosure: I have no positions in any stocks mentioned, and no plans to initiate any positions within the next 72 hours. I wrote this article myself, and it expresses my own opinions. I am not receiving compensation for it. I have no business relationship with any company whose stock is mentioned in this article. Charts created with AmiBroker – advanced charting and technical analysis software.

Michael Harris
547 Followers
Michael Harris is a trader, book author, software program developer, and blogger. He started developing advanced pattern recognition software for the benefit of position and swing traders in the late 1990s. In years past, Michael has also done work for a number of different financial firms, where he developed bond portfolio optimization programs and trading systems for commodities and stocks, and worked as a trader for a hedge fund. Michael is also a well-known author. His first book, "Short-Term Trading with Price Patterns," was published in 1999. His other two books, "Stock Trading Techniques with Price Patterns" and "Profitability and Systematic Trading," were published in 2000 and 2008, respectively. His most recent book is "Fooled By Technical Analysis." Michael holds a Master's degree in Operations Research, with an emphasis in forecasting and financial engineering and another Master's degree in Mechanical Engineering. Website: www.priceactionlab.com
Follow
1 Comment
To ensure this doesn’t happen in the future, please enable Javascript and cookies in your browser.
Is this happening to you frequently? Please report it on our feedback forum.
If you have an ad-blocker enabled you may be blocked from proceeding. Please disable your ad-blocker and refresh.