After a year and a half of incredibly volatile oil prices, the recent rally had Congressmen clammering once again for increased regulation. Throughout 2007 and into 2008, crude oil prices saw a 150% increase before topping out just under $150 per barrel. As the bubble popped, traders ran for the exits and prices collapsed 75% dropping nearly $120 per barrel. Yet, the volatility had yet to end as March saw oil prices begin to rally eventually gaining over 100%.

What is causing all this volatility?

It seems rather difficult to believe that supply/demand dynamics of the physical commodity are truly at play here. Something does need to change in this market. A stable, functioning commodity market is crucial to the global economy and especially now in a time of turmoil. Price stability must be achieved for the efficient functioning of the millions of businesses dependent on commodity prices.

The massive use of leverage in futures markets is causing exacerbated price swings unreflective of the supply/demand dynamics. The original intents of leverage were practical as the markets were dominated by hedgers. Reducing the upfront cost to a business hedging its risk was warranted. The business then received delivery or delivered the commodity as per the contract.

Now, the markets are radically different. Speculators dominate futures markets and fewer than 5% of contracts actually result in an exchange of the physical commodity. The leverage ratios are similar to what the stock market saw during the Great Depression.

The Crash of 1929 and the subsequent depression in both stock prices and economic activity were attributed, in part, to excessive use of debt to buy common stocks. At the time, brokers would lend as much as 90 percent of the money that customers paid for stocks, leaving only a 10 percent equity margin to cushion declines in stock prices. This lending, it was argued, not only stimulated demand for common stocks, thereby elevating stock prices and encouraging a subsequent crash, but also promoted a sharper decline in prices when customers' equity positions vanished and brokers made margin calls requiring a deposit of additional cash and securities to restore customer equity. As we show later, margin calls can also force liquidation of shares valued at a multiple of the value of the margin call, thereby exacerbating the effect on stock prices.

Are we repeating the same mistakes of the Depression? Do our current rules stimulate massive price swings?

It seems likely. The liquidity in most futures markets is not an issue. With margin requirements between 5-15% on most commodity contracts, speculators are given very high leverage enabling the herd to exaggerate every move in price up or down.

In a market so incredibly important to the well-being of our economy, it seems silly to allow for these leverage levels. A margin requirement of 50% as enforced in the stock market seems reasonable. Special exemption could be made for those delivering or receiving delivery to not hinder business operations of hedgers.

Otherwise, let's take back our commodity markets from these unneeded uncertainties. 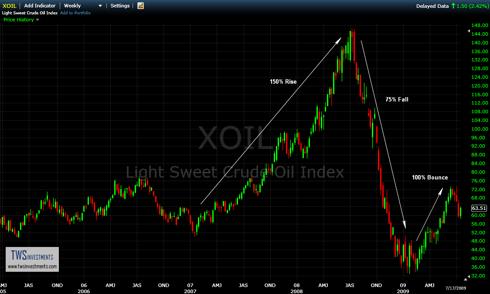