The story goes that sometime in the early 1990s, a Western Australian gold mining outfit had purchased a pub across the road and included the pub revenue in the gold revenue with costs being accounted for somewhere else below the line in their financials. (Apparently the pub was only marginally profitable, which in itself makes this story highly questionable; but let's not allow details to get in the way of a good story.) One is tempted to ask: "Would'cha like a whiff of beer with that gold?" when calculating 'What It Really Costs' to mine gold for this particular outfit.

Irony aside, we felt it was as good a time as any to sit down and write a short piece on gold mining costs, and why it may not be as simple to produce meaningful metrics as some seem to suggest.

Before we continue, we would like to give references to sources that we used liberally for this article: Brian Christie, VP Investor Relations at Agnico-Eagle (AEM), gave a talk at the Denver Gold Group Luncheon on May 6 in Toronto and the presentation can be viewed here. Andrew J Vigar of Mining Associates gave a keynote at the Mines and Money conference in Hong Kong in March 2013 and the presentation is here. The Visual Capitalist has uploaded a relevant presentation on the topic here. And the Break Away Digger has an interesting piece available here. These documents come with a recommendation for your weekend reading from your humble scribe. 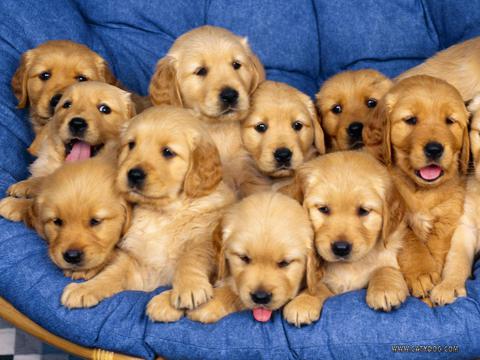 (Golden Retriever Puppies. How much is that Doggie..?)

A cost standard adopted in 1996 by the Gold Institute was an early attempt at standardizing cost reporting. This standard was widely adopted throughout the global gold industry, and regulatory bodies such as the Toronto Stock Exchange and others recommended its use by listed companies. While the Gold Institute ceased operations at the end of 2002, the standard has remained in use until today and was also adopted with minor modifications by the Silver Institute in 2011.

Recently pressure has mounted to update this cost reporting standard in order to improve transparent accounting for all costs associated with production. Or as Chuck Jeannes, CEO of Goldcorp (GG), puts it:

"The traditional measure of cash costs is not a realistic view. To produce an ounce of gold, we not only incur operating costs, but we spend sustaining capital at the sites, we spend G&A to keep the lights on, and we spend dollars to explore, to sustain our future. If you put all those together, that's an all-in sustaining cash cost. It's a much more transparent and accurate way of judging the real costs of getting an ounce of gold out of the ground."

Since most mining companies still report cash costs in reference to the Gold Institute cost standard, it is worthwhile to briefly review the definitions:

Mining companies are most likely to report Cash Operating Costs or Total Cash Costs, except for Gold Fields (GFI), who invented their own cost measure called Notional Cash Expenditure (NCE) in 2008. Presently an industry group is working on the definition of a new cost measure with a work-in-progress name of All-In-Sustaining-Costs or AISC. This is not an entirely new concept since many analysts have been using a similar measure for their work. Various gold mining companies including most majors have started to report their costs as AISC preempting the release of the new standard.

Here is how Barrick Gold (ABX) defines their version of the AISC in the 2012 annual report:

Goldcorp, Newmont (NEM) or Agnico-Eagle use similar definitions. The important element here is the so-called 'sustaining capital expenditure', which is the capital required to sustain existing production levels. The table below is taken from the Agnico-Eagle presentation referenced above and provides a comparison of company-wide AISC for some of the major gold miners, including Goldcorp, Barrick Gold, Newmont Mining, Yamana Gold (AUY), Randgold (GOLD), Kinross (KGC), Agnico-Eagle Mines, Eldorado Gold (EGO), Goldfields and Centerra (CAGDF.PK). The difference between cash costs and AISC is significant. It is also important to note that these AISC are still noticeably below the present spot price for gold. 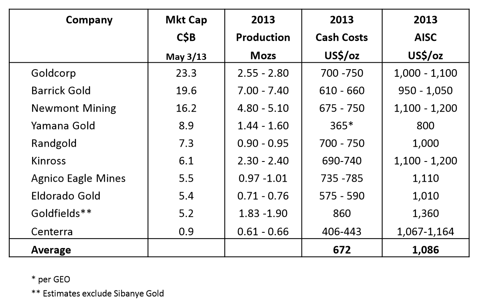 AISC give investors a much better tool to evaluate true margins than cash costs. And AISC provide a much clearer picture to governments when negotiating for taxes and royalties. AISC do not account for costs associated with new mines such as acquisition costs and capital expenditures to build new mines or expand existing ones. AISC also ignores financing costs and taxes.

AISC can be applied to individual mines as well as across companies with multiple assets. By excluding taxes and financial costs, the measure becomes a better tool to compare costs between companies and jurisdictions. And by excluding all mine development costs, it represents true mining costs without clouding the picture by introducing growth-related cost elements.

How does this measure compare to 'True All-In Costs' generated by our fellow author Hebba Investments? Well, it does not. In our view, Hebba's numbers are rough ballpark figures at best and lottery numbers at worst. In many cases, Hebba's numbers have little to do with production costs. If anything they provide round-about profitability snapshots of companies normalized against the silver spot price. Not very helpful in our view when trying to judge true production costs.

AISC on the other hand will provide a tool to judge true all-in production costs and we are in pleasant anticipation of the document laying out the agreed formulation for all gold miners to use. Such a final standardized formulation of how to calculate the AISC was scheduled for mid-2013. Apparently, a number of issues and details are still being addressed and as is often the case in such situations, final publication might be postponed. However, from an investor's point of view, it would be highly desirable to have a standard ready in time for 2013 annual reports.

Disclosure: I am long AEM. I wrote this article myself, and it expresses my own opinions. I am not receiving compensation for it (other than from Seeking Alpha). I have no business relationship with any company whose stock is mentioned in this article.

Itinerant
5.79K Followers
Author of Itinerant Musings
Access to award winning research on resource and energy stocks.
Engineer by trade and passion. Have worked internationally for over three decades, running my own business. I hold a PhD in engineering, but honestly believe that the school of hard knocks has taught me lessons that are more applicable to my writing here on Seeking Alpha. My investing interests mostly concern the resource sector, with a focus on precious metals, base metals and energy stocks of all sizes. My research explicitly includes small- and micro-cap juniors, and I try to manage the associated risks in a methodical manner.

Some of my work is available free of charge on Seeking Alpha. If you have come to like these offerings, then please consider joining my Marketplace service called Itinerant Musings where I usually present my best ideas and provide personalized interaction.

Follow
44 Comments
To ensure this doesn’t happen in the future, please enable Javascript and cookies in your browser.
Is this happening to you frequently? Please report it on our feedback forum.
If you have an ad-blocker enabled you may be blocked from proceeding. Please disable your ad-blocker and refresh.