Using options and deploying $100,000, this portfolio seeks to achieve returns comparable to investing $250,000 in the S&P 500 (SPY). The investment time frame is 5 years. The underlying stocks are selected primarily based on dividend growth credentials, while the options positions consist of diagonal call spreads.

I implemented this portfolio on 6/14/2013, and plan to write on the individual names over the coming year, and present an analysis of results at year end for the next several years.

The following parameters were used to select the underlying stocks, using Portfolio123, where I am a paid subscriber:

A primary consideration is the maximum drawdown, which is considerably less than the 55.4% lost by the S&P 500 during the financial crisis. 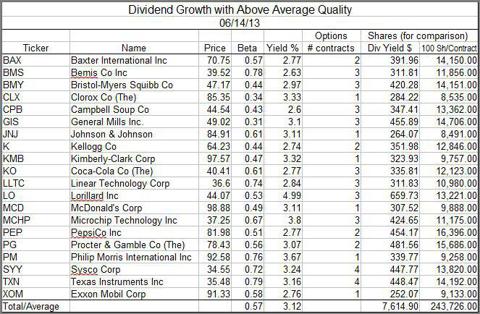 Based on a hypothetical $250,000 portfolio, the number of shares to achieve an equal weighting was computed, and then divided by 100 and rounded to get the number of options contracts.

Buying and selling at 6/14/2013 market prices, here are the resulting positions:

Note that over half the $100,000 initially placed in the portfolio is held in cash. In the event share prices decline by substantial amounts, the strategy involves rolling the long option positions down, which will require additional funds.

The portfolio consists of diagonal call spreads: long distant expiration, deep in the money calls, against which shorter term, out of the money calls are sold. It may be described as a covered call strategy on steroids.

The short calls expire between 4 and 7 months in the future. I wrote an article last year detailing the reasons I prefer selling calls so far into the future. Briefly, it allows headroom, so the underlying has room to increase without the short call going into the money. Also, the 90 day decay characteristics are generally favorable, allowing the investor to roll the short calls rather than leave them outstanding through expiration.

Assuming share price is unchanged when the short call expires, the static return on these positions typically exceeds the dividend return on the same position if taken by actually owning the shares. In this case, static returns, annualized, would be as follows: 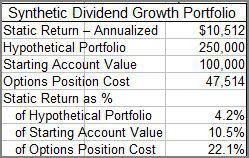 The dividend yield on the stocks involved, as of the selection date, was 3.2%, when purchased in approximately equal amounts.

Capital gains and losses are difficult to compute under a variety of scenarios. I'm operating on the basis that within a band of approximately 8% up or down, the portfolio will meet its objective of matching the performance of $250,000 in the index. That's based in part on my interpretation of my experience with the options strategy over the past 4 years and includes actively managing the positions. Also, the historical outperformance of Dividend Growth stocks, as shown by the backtest, is a factor.

Because the strikes of the long calls were originally set at approximately 80% of the share price, beginning leverage is 5X, based on the amount invested in the long options positions. So a 1% move in the underlying would increase the value of the long call by 5%, disregarding delta. As such, the approximately $52,000 of long options would roughly parallel $250,000 worth of stock, over the long term and within the 8% plus or minus range.

On a day to day basis, the combined long/short positions as established have a delta that is considerably less than one, 0.60 as an estimate. Additionally, the average beta of the underlying is 0.57. While the options will be volatile, the daily gain or loss, in dollars, should be tolerable to well-informed investors, when compared to the hypothetical $250,000 invested in the S&P 500 index.

Most of the gains (if any) on this portfolio will be taxed as ordinary income. Dividends and long-term capital gains from holding the S&P index currently receive preferential tax treatment, an item which will be of varying importance to investors, depending on their individual situation.

Dividend Growth has performed well over the past ten years, as detailed at length in my article discussing backtests on the strategy. These stocks are wildly popular in the current market, and are overpriced by approximately 5% on average, in my view. Over the 5 year investment horizon, the over-valuation seems acceptable.

Diagonal Call Spreads of the type discussed here have inherent defensive advantages, when the money not spent buying the shares is held in reserve. I discussed the strategy at length in an article several years ago, and won't detail the reasoning here. Briefly, downside is limited to the cost of the option, and is cushioned by the expected increase of time value from increased volatility and being closer to the money in a declining market.

A possible macro scenario would call for the market to work higher, fueled by continued easy money and irrational exuberance. That could continue for some time, until the wretched excess of fraud, abuse and manipulation implodes in the usual way. The investor is caught in Chuck Prince's dilemma: he has to dance, or sit lonely and forlorn on the sidelines. Sitting there rooting against the market will embitter you, rapidly.

The strategy under discussion here leaves the investor participating in the market, with rewards similar to if he were fully invested in the index, but with ample reserves of cash, assuming he starts with the hypothetical $250,00 amount. I didn't include any assumptions about returns on the excess cash, in effect assuming it's held in an FDIC insured account earning little or no interest.

A Discussion of Risk

Options involve substantial risk and are not suitable for all investors.

That having been said, in my view this strategy entails less risk than investing the hypothetical amount in the S&P 500, assuming the investor actually has a good part of the difference in cash and holds it safe. After all, if the stocks involved go down 35%, market conditions will be panicky and an investor armed with cash and courage can do well under those conditions.

Based on my experience, I'm operating on the basis that in a severe downturn I'll be able to roll all the long option positions down to a strike below the lowest market price, utilizing only the existing cash of $52,000 in the brokerage account. That will leave the $150,000 that is held in FDIC insured bank accounts available as dry powder.

Disclosure: I am long SPY, BAX, BMS, BMY, CLX, CPB, GIS, JNJ, K, KMB, KO, LLTC, LO, MCD, MCHP, PEP, PG, PM, SYY, TXN, XOM. I wrote this article myself, and it expresses my own opinions. I am not receiving compensation for it (other than from Seeking Alpha). I have no business relationship with any company whose stock is mentioned in this article.

Tom Armistead
3.8K Followers
I'm a well-informed retail investor and post on SA in order to expose my thought process to critical examination and comment from readers. It makes me a better investor. I'm particularly proud of bullish macro articles posted in 2009 and later, in which I presented ideas that encouraged me to invest very profitably in a rising market. I also did articles on individual stocks, many of which contained insights not available elsewhere. Finally, I wrote a number of thoughtful articles critical of financialism and the lack of ethics on Wall Street. I donate the proceeds from my blogging to charity. The best way for me to monetize my insights is to invest accordingly. As a retail investor, I don't give investment advice. I write about what I'm investing in, and the thought process involved in decision making and stock selection. Hopefully some of what I write is of benefit to others, by sharing my experience as I interpret it and helping them improve their investment thinking and process.
Follow
23 Comments
To ensure this doesn’t happen in the future, please enable Javascript and cookies in your browser.
Is this happening to you frequently? Please report it on our feedback forum.
If you have an ad-blocker enabled you may be blocked from proceeding. Please disable your ad-blocker and refresh.