The Treasury International Capital report each month is not normally looked at with much scrutiny because, truth be told, it's usually a non-event. Foreign sovereigns buy enough U.S. government securities to increase their total holdings between 0.5% and 1.0% month over month. The U.S. Treasury almost always has a surplus of buyers for its debt which allows it to continue to run up trillion-plus dollar budget deficits and export the inflation to the rest of the world. But, what happens when that doesn't happen? And what does that mean for Gold (GLD)?

In April, the TIC report was the most negative one I've seen since China dumped $100 billion in U.S. Treasuries in August 2011. That caused gold to spike to $1926 per ounce, the Swiss to peg the Franc to the euro (FXE) and eventually the five major central banks to open up a $500 billion coordinated swap line to ensure that liquidity would flow. Some $69.4 billion in net sales of U.S. Treasury securities were sold in April and what is interesting about this report is that it wasn't the work of one 'rogue' central bank attempting to make a statement, it was a lot of them. 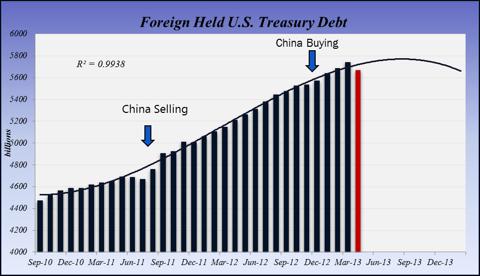 I've presented the above chart before, and when I did the last time, I did it was because of a curious event whereby China was the major net buyer, without whom there would have been a month like April.

So, what's going on? Who's doing the selling? The answer is emerging markets, mostly Southeast Asia and Japan. Japan sold $14 billion but it owns $1.11 trillion. Singapore sold $8 billion of its $98 billion, and this was the second such month in a row.

Okay. So, now we know what happened and who's did it. But the big question is why? For that we have to start looking at bond yields. Specifically, we need to understand that both U.S. and Japanese bond yields spiked to their lowest levels of the year near the end of April and turned on a dime May 1st with the release of the FOMC minutes for that month. The Yen (FXY) exploded above ¥94 early in April which caused a huge surge in buying JGBs and USTs (TLT) and sent the U.S. dollar soaring (UUP). In response, the selling of U.S. Treasuries behind the scenes by emerging markets to raise dollars for their foreign exchange reserves began.

Bond yields started to rise in early May as the Fed began serious talk about slowing down QE. And the capital flight began to intensify until it reached its peak last week. Bond spreads in some markets, like Singapore, Mexico, Brazil and Hong Kong collapsed.

While for others, like Thailand (18% drop peak to trough) and the Philippines (17% peak to trough), their equity markets have been under heavy pressure. Singapore has gotten it from both ends with the Straits Times Index dropping more than 9% and its 10 year spread with the U.S. moving to parity.

It is no stretch to say that the short position of the Japanese yen may be one of the biggest short positions ever. And with the huge reversal in the yen in the past 3 weeks, the size of the moves we have seen can only suggest that there is a leverage at work in the unwinding of the short yen carry trade.

And if that's the case, then the Fed will have its hands full trying to contain the capital drain currently occurring in emerging markets and Asia. These countries will have been selling U.S. Treasuries all through May and now into June. So, we can expect that next month's TIC Report will look equally ugly. Moreover, May's budget deficit came in sharply worse than anticipated at $139 billion on expectations of $110 billion. Now, of course, this makes perfect sense when we note the huge move in U.S. bond yields and the higher debt service costs that are associated with this.

The takeaway here is that there is serious volatility happening on the fringes of the global banking system and this is where the whirlwind almost always starts. Now, we have leveraged carry trades unwinding after suicidal monetary policy decisions by the Japanese that could be spinning things out of control.

China's interbank markets are drying up and the curve is a complete mess.

Is it any wonder that people are lining up by the thousands to buy gold in Shanghai?

I'm not convinced that control has been lost, but with the Fed continuing to buy Treasuries, if there is another repo collateral shock going on (like what happened back in April which helped cause gold to drop) then what we have seen so far is simply the early tremors before the big shock wave. If not, then we have the upper limit for yields in U.S. Treasuries that the Fed is willing to accept and this has been nothing more than a resetting of the table for the next round of big QE.

But, this time there won't be a compliant Bank of Japan soaking up all of those dollars, unless the ECB steps up to the plate and begins debasing the euro. So now when the Fed prints, it's going to show up as inflation, which is exactly what I think it wants. Therefore TIPS yields should begin to drop again, and the breakeven rate should begin widening back out towards 2.5% and gold should follow along to the upside.

The demand for physical gold coming from China and India is likely what started this mess in the first place and is what will continue to create strains in these markets as well. As long as the prices stay in this range, gold will flow from west to east and the closer we will come to the day when the futures market will have to fully recognize the disconnect between the physical price - now a $217 premium in Vietnam - and the securitized price.

A weekly close above $1400 would be an accomplishment since gold has not been able to hold that level through a Friday close since the crash back in April. If the current price range holds, this will be the fourth inside bar on a monthly basis out of the last six in gold. This is extremely odd behavior no matter which side of the gold market you are on.

I'll be watching the U.S./Singapore 10 year spread as well, looking for it returning to a more normal 0.5% from its current near parity as a sign of a relaxation of capital flight stressors. The 2.2% rate on the 10 year U.S. note seems to be the Fed's limit as well. A weekly close above that at this point would be bearish, especially if emerging market spreads continue to widen.

Additional disclosure: I own physical gold, silver and a trio of dairy goats

Tom Luongo
2.35K Followers
I am a former research chemist by trade and an Austrian Economist by study and a market analyst by choice. For the past four years I have been a Senior Financial Editor with Newsmax Media publishing my thoughts on where markets, central banks, gold and geopolitics meet and explode.  I am now the publisher of Gold, Goats n' Guns, a monthly newsletter offered through Patreon.  I have been an investor and market analyst for more seventeen years and am an astute observer in changes within the culture and the political landscape. Feel free to find me on: My personal blog, Giold Goats 'n Guns: www.tomluongo.meYou Tube: https://www.youtube.com/channel/UC54PyZuVrDrhbWc6UqNjEBALinkedin: http://www.linkedin.com/pub/tom-luongo/5/384/a59/ Twitter: @TFL1728 Patreon: www.patreon.com/goldgoatsngunsPeriscope: @tomluongo (Mondays at 8pm and Fridays @ 9pm EST)