According to our recent report The Global Market for Equipment and Materials for IC Manufacturing, the semiconductor market is down 23% for the first five months of this year compared to 2012, as shown in the chart below.

However, based on our analysis detailed in this article, we project the semiconductor equipment industry can increase revenues by 5% Y-o-Y. 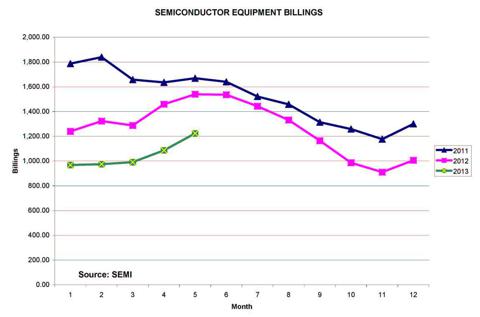 We base our analysis on several factors. First, as noted in the bulleted items below, there is a move to smaller dimensions that is accelerating. "IC makers that moved from 40nm to 28nm have experienced a 35% average increase in speed and a 40% power reduction," said Jack Sun, vice president of R&D and chief technology officer at TSMC (TSM). "In comparison, IC vendors that will move from 28nm to 20nm planar are expected to see a 15% increase in speed and 20% less power."

TSMC will begin volume production of 20nm CMOS at the end of the second quarter 2013 at its Fab 14 plant and ramp 20-nm production in the second half of 2013. TSMC's ability to transition manufacturing of chips from 28-nm to 20-nm bulk CMOS is a warning shot for competitors Samsung (OTCPK:SSNLF), GlobalFoundries and UMC (UMC).

Not to be outdone, Intel (INTC) is already making Ivy Bridge processors at 22nm and its roadmap plans on Silvermont at 22nm in 2013 and Airmont and others at 12nm in 2014.

Second, the table below shows the 2013 capex guidance with an average change of 6% for the top six companies listed. While Capex changes over the course of the year, these announcements fortify our analysis that the demand for processing equipment will be 5%

The chart below shows the correlation between semiconductor equipment billings and our PLIs going back to January 1995. 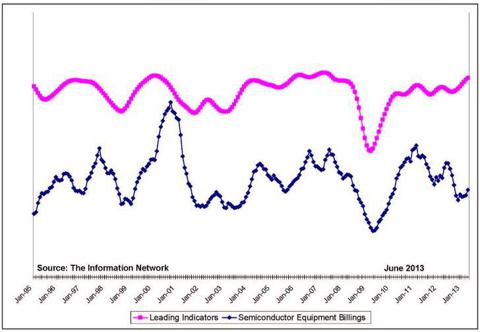 Based on this information, Q2 announcements by semiconductor equipment suppliers should be above consensus, followed by even greater earnings reports for Q3.