Coca-Cola (NYSE:KO) has significantly more volume than competitors and they have a world class distribution system to move it. They also have higher net profit margins than competitors despite their CCE acquisition which compressed margins in North America. Not having to rely on licensing agreements with other companies for distribution in the US, Coca-Cola is more independent than competitors.

PepsiCo (PEP) is a big competitor in the Americas but 51% of their net sales come from food. Dr Pepper Snapple Group (DPS) relies on licensing agreements with bigger companies like Coca-Cola and PepsiCo for distribution. Also, almost all the Dr Pepper operating profits are from the US and Canada. Nestlé (OTCPK:NSRGY) has a considerable amount of liquid refreshment beverage [LRB] volume in the US but they are not a big player in the carbonated soft drink [CSD] market. Also, most of Nestlé's sales come from products outside the LRB market. Cott (COT) is small in terms of market share and they are more of a manufacturing company. National Beverage Corp. (FIZZ) is also small in terms of market share. Monster Beverage Corporation (MNST) is small in terms of CSD market share and they rely on third party companies like Coca-Cola for distribution. Monster is more of an energy drink specialist.

Per my last Coca-Cola article that cites Beverage Digest, Coca-Cola is #1 in U.S. CSD volume with 42% followed by Pepsi with 28.1% and Dr. Pepper with 16.8%. Cott, National Beverage, Monster and others combine to form just 13.1%.

Beverage Digest shows that Nestlé is in the picture for liquid refreshment beverages. 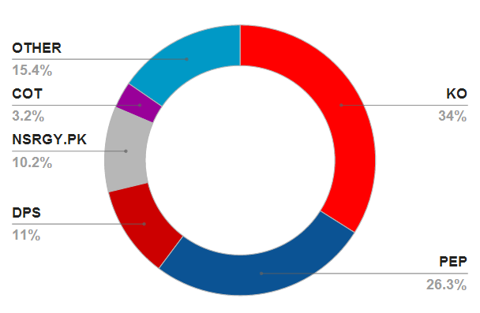 Note that Coca-Cola distributes some of the DPS, NSRGY.PK and other volume above. This graphic is important because it shows that companies like Monster, Cott and National Beverage are very small compared to Coca-Cola in the US. They are even smaller on a comparative basis outside the US.

*This LRB graphic includes CSDs and water but excludes Cliffstar which was acquired by Cott in 2010.

Coca-Cola defines a unit case as 192 US ounces and they sold 27.7b unit cases in 2012. Beer companies show their volume in HL. The Beverage Digest Liquid Measurement Converter shows that 1 unit case [192 US fluid ounces] equals .05680 HL. This means Coca-Cola sold 1,573 HL in 2012. AB InBev, the biggest beer company in the world, sold 354.9 HL in 2012. Selling more than 4 times more volume than the biggest beer company in the world is noteworthy.

We make our branded beverage products available to consumers throughout the world through our network of Company-owned or controlled bottling and distribution operations as well as independent bottling partners, distributors, wholesalers and retailers - the world's largest beverage distribution system. Of the approximately 57 billion beverage servings of all types consumed worldwide every day, beverages bearing trademarks owned by or licensed to us account for more than 1.8 billion servings.

The annual report talks about the fact that competitors like Dr Pepper, Monster and Nestlé rely on Coca-Cola for distribution:

Coca-Cola is a truly a global company. 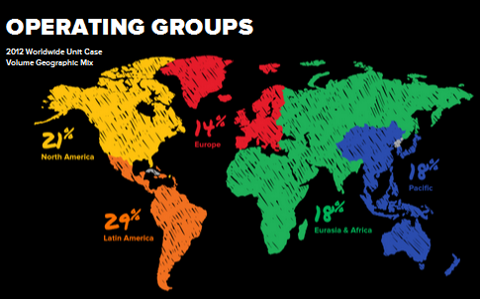 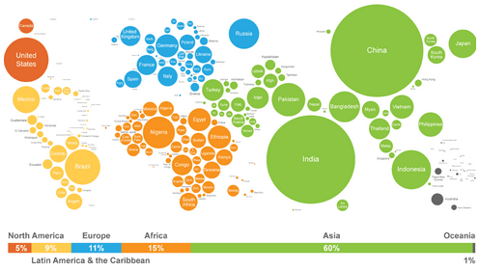 Don't expect Coca-Cola volume to match the world population map perfectly. Some areas are more profitable than others and the company will continue to pursue market share harder in some areas than others. 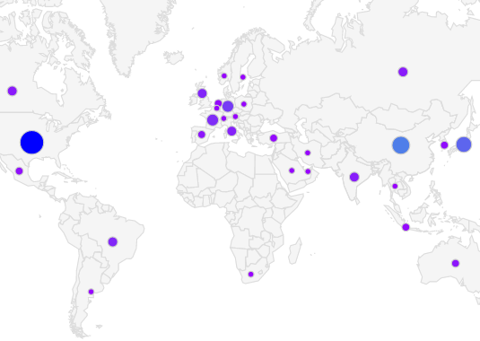 World GDP by country gives us an idea as to where the biggest markets are located. The above visual shows the top 30 countries in the UN 2011 list on wikipedia.org.

Our gross profit margin decreased to 60.9 percent in 2011 from 63.9 percent in 2010. The decrease was primarily due to the full year impact of consolidating CCE's former North America business as well as a significant increase in commodity costs.

The Company's acquisition of CCE's former North America business during the fourth quarter of 2010 resulted in a significant adjustment to our overall cost structure, especially in North America. Finished product operations typically have lower gross profit margins and greater exposure to fluctuations in the cost of raw materials when compared to concentrate operations. The following inputs represent a substantial portion of the Company's total cost of goods sold: (1) sweeteners, (2) metals, (3) juices and (4) PET. The majority of these costs are included in our North America and Bottling Investments operating segments. The cost to purchase these inputs increased significantly in 2011 when compared to 2010, and as a result the Company incurred incremental costs of $800 million related to these inputs during 2011.

Relatively speaking, Coca-Cola has a lower cost of goods sold. There is a huge gross margin percentage drop off after MNST. The relative cost of goods sold is very high for FIZZ and it is in a totally different ballpark with COT.

We see that the operating costs of MNST are relatively low such that they have a higher operating margin than KO. The SGA for PEP is high relative to competitors.

Both PEP and COT have high interest payments relative to competitors. This hurts their net margins.

Coca-Cola has the highest net profit margin. Monster is the only other company that is close. 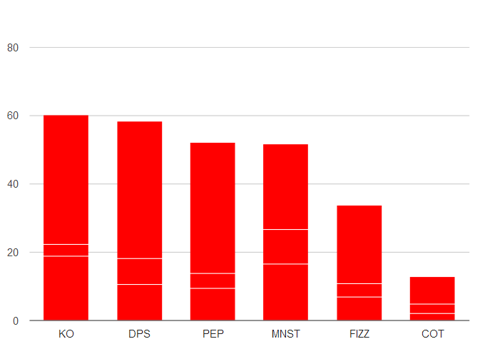 Monster has higher operating margins than Coca-Cola but it is an apples and oranges comparison for many reasons:

1. Monster relies on Coca-Cola for distribution.

3. Coca-Cola and Monster are in different leagues when it comes to CSD volume (Monster has just 1.4% of U.S. CSD volume).

Only 20% of PepsiCo's operating profits come from outside the Americas. Food and beverages combine to form this 20%.

Almost all their operating profits come from the US and Canada. The company depends on Coca-Cola and PepsiCo for 2/3rds of their Dr Pepper distributions.

Here is a breakdown of operating profits excluding 1,912 of unallocated items:

*In millions of CHF

Cott has a different business model - they do manufacturing for other companies. Here is what their annual report says about this:

We sell the majority of our beverages under retailer brands to customers who own the trademarks associated with those products.

We can see that Cott sees itself as more of a manufacturing and bottling company by looking at the peer group they have chosen in their annual report. Rather than comparing themselves to KO and DPS, they use a peer group made up of the following:

About 3/4ths of Cott's operating income comes from North America and about 1/4th comes from the UK.

For the most part they manufacture value brands as opposed to heavily promoted brands like Coca-Cola. Ingredient and packaging costs are a big factor for Cott. They rely on commodities like aluminum, pet, corn, sugar and fruit. They are not able to raise prices very much in relation to costs because they don't end up with heavily promoted brands. As such, their gross profit margins are in a different universe.

The company is primarily in North America. Their Shasta brand is not as heavily promoted as Coca-Cola, PepsiCo and Dr Pepper Snapple Group brands. Their peer group is made up of Coca-Cola Bottling Company Consolidated and Cott.

Monster Energy brand drinks represented over 92% of 2012 sales so it is safe to say that the company focuses on energy drinks.

The company does not directly manufacture products. The manufacturing process is outsourced to third party bottlers and contract packers. They rely on the TCCC North American Bottlers, AB Distributors, New CCE and Coca-Cola Hellenic for distribution. Only 22% of sales are outside the US.

Here are the Net Sales by Product Line:

Many times analysts focus on US data when comparing these companies. Looking beyond the Americas, it is obvious that Coca-Cola is in a class by itself when it comes to sparkling beverages.

Disclosure: I am long KO, PEP. I wrote this article myself, and it expresses my own opinions. I am not receiving compensation for it (other than from Seeking Alpha). I have no business relationship with any company whose stock is mentioned in this article.

Additional disclosure: Any material in this article should not be relied on as a formal investment recommendation.

Eric Sprague
3.37K Followers
I'm an individual investor heavily influenced by Warren Buffett and Charlie Munger. Munger's 1994 USC Business School Speech is something I think about a lot: ### Over the long term, it's hard for a stock to earn a much better return than the business which underlies it earns. If the business earns 6% on capital over 40 years and you hold it for that 40 years, you're not going to make much different than a 6% return—even if you originally buy it at a huge discount. Conversely, if a business earns 18% on capital over 20 or 30 years, even if you pay an expensive looking price, you'll end up with a fine result. ... Another very simple effect I very seldom see discussed either by investment managers or anybody else is the effect of taxes. If you're going to buy something which compounds for 30 years at 15% per annum and you pay one 35% tax at the very end, the way that works out is that after taxes, you keep 13.3% per annum. In contrast, if you bought the same investment, but had to pay taxes every year of 35% out of the 15% that you earned, then your return would be 15% minus 35% of 15%—or only 9.75% per year compounded. So the difference there is over 3.5%. And what 3.5% does to the numbers over long holding periods like 30 years is truly eye-opening. If you sit back for long, long stretches in great companies, you can get a huge edge from nothing but the way that income taxes work. ### Feel free to follow me on twitter: https://twitter.com/ftreric
Follow
7 Comments