Lately there is talk in the financial media about a US bond market meltdown. However, as the charts show, the recent spike in yields can be hardly considered a meltdown. Actually, yields are still on a very strong downtrend and there is the possibility, if the recovery falters, for yields to get down to 1% in the case of the 10-Year Note. As far as quantitative easing is concerned, in my opinion, all the talk about when it will end is a distracting issue because it will be with us for a long time.

Quantitative easing is the new tool of exercising monetary policy in an environment of a destabilized worldwide banking system. The bifurcation that caused the destabilization of the system in 2008 triggered many fast but also slow modes related to deflationary pressures that will take many years to decay. System theorists know what I am talking about, but for all others, the idea is that it takes time for the dust to settle and maybe we are talking about 10 to 20 years. Since the financial crisis erupted 5 years have already passed and things are only marginally better in the US but are getting worse in Europe and for the BRICs (BKF). Those that do not like Bernanke for his QE policy and want him replaced will maybe have to live with someone else who will be forced to continue pulling the trigger of asset purchases for several years to come unless something spectacular happens and there is solid world economic growth.

Now, the spike in the 10-Year Note yield from the lows is far from a meltdown. As the chart below shows, yields are well within their down-channel and on a downtrend: 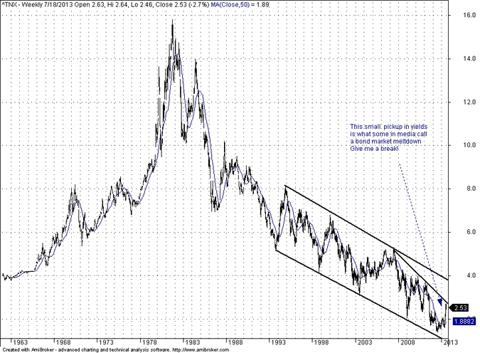 Why would anyone want to call a typical spike (a.k.a. "dead cat bounce" in technical analysis) in a severe downtrend a meltdown? I can think of several reasons but they are not important. The fact is that a rise in yields makes bonds (TLT) cheaper, and if the outlook for the economy is not all that good, it makes bonds more attractive to portfolio managers. Below are three major events that may cause a flight to quality in the near future:

1. A breakup of the Euro

This is possible in my opinion and maybe inevitable down the road because of the structural imbalances in the EU. While Germany has enjoyed the benefits of a monetary union by essentially having a undervalued currency relative to its economic strength, it is now reluctant to share the cost of the banking and debt crisis and wants to force nations with debt problems to create surpluses to finance their deficits through austerity. This plan cannot last for another year because it has put those economies in a death spiral. As I have argued in another SA article, a solution to Europe's problems could be Germany leaving the euro. Regardless of how the imbalances will be corrected, either by a outright breakup or by a German exit, there will be an initial flight to US debt until the dust settles. That could push yields down substantially.

The problem of shadow banking in China is maybe bigger than initially thought and some economists claim it is reminiscent of America's subprime-mortgage boom. If a similar crisis erupts in China like in the US in 2008, there will be a rush to US debt.

Brazil, for example, is facing a major economic slowdown and rising inflation. Despite all the hype surrounding the Brazilian economy in recent years, things have gotten worse for the middle class due to an eroding purchasing power. The decline in foreign investment may be followed by capital outflows and a flight to high quality US assets, both stocks and bonds.

Economic growth in Russia, solid GDP growth although less than expected, persisting retail sales and growing agricultural output are a positive sign for emerging markets but political uncertainty in the future may add to the capital flight to the US.

The above are plausible scenarios and no hype of the form "we are having a bond market meltdown" should cause portfolio managers to overlook them. The fact that a few speculators made money recently by trading short-term (TBF), the ProShares Short 20+ Year Treasury exchange-traded fund, cannot compensate for the high bond gains of 2011, for example, and more importantly for the fact that yields have been decreasing in the last 20 years as shown by the down-channel on the above chart. Therefore, I would be very careful to declare that bonds are in a bear market at this point, or even worse in a meltdown phase, at least before the 10-Year Note yield challenges again its recent highs and moves above 3% and also fears subside about possible adverse worldwide events, such as the ones listed above, that can cause a massive flight to US debt .